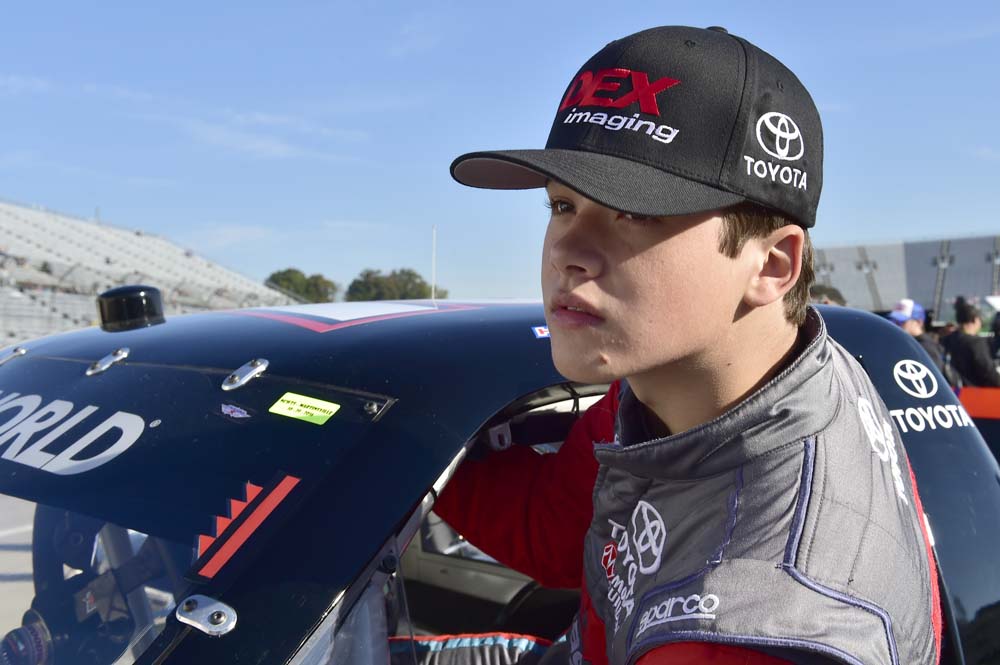 MOORESVILLE, N.C. (March 28, 2017) – Harrison Burton will make his first 2017 NASCAR Camping World Truck Series (NCWTS) start of the season Saturday afternoon at Martinsville (Va.) Speedway behind the wheel of the No. 51 DEX Imaging Toyota Tundra in the Alpha Energy Solutions 250. Burton, the son of former NASCAR driver Jeff Burton, made his Truck Series debut with Kyle Busch Motorsports (KBM) at Martinsville in October of 2016. After qualifying 17th, Burton maneuvered his way through the field and was running in the ninth position just past the halfway mark of the event when he got spun from behind and ended up losing a lap. He ended the event with a 22nd-place finish, but hopes to take that experience and learn from it at the paperclip-shaped track this weekend.

The talented rookie’s list of racing accomplishments includes three Quarter Midget championships, winning the pole for a Pro Late Model race at the age of 11 and winning a race at the age of 12. In 2015, he became the youngest driver ever to compete in the NASCAR K&N Pro Series West race (15 years, eight days old) and earned a sixth-place finish in the event. In 2014, he became the youngest winner in NASCAR Whelen All-American Series history with a victory at New Smyrna (Fla.) Speedway. Not only is Burton racing in six NCWTS events in 2017, he is also competing for a championship in the NASCAR K&N Pro Series East.

When Burton takes the green flag Saturday afternoon, he will don the colors of his sponsor DEX Imaging. DEX Imaging, based out of Tampa, Fla., is the nation’s largest independent provider of office technology with a local touch. Burton is excited to have them on board the No. 51 Toyota Tundra at Martinsville Speedway and he hopes to bring home his first grandfather clock to add to the clock his father won in 1997 when the checkered flag waves.

What are your thoughts about the race at Martinsville?
“I think we need to come out here and expect to perform well because I know we are capable of it and let it be like any other race. It (the race) is a really big deal and a very prestigious race, one of the most prestigious that I have ever been in. But, you have to step back and realize it is a normal race and go out and do the best that you can.”

How do you feel about climbing back into a truck for only the second time?
“It has been since last year that I’ve been in a truck. I’m really looking forward to climbing back into the No. 51 knowing that I have a great truck coming into the race. KBM always pumps out great trucks and it is very rare to see them struggle. I’m really excited to be a part of the team again and come back and learn, and hopefully come out of here with a great finish. We have to set realistic goals for ourselves and take what we can and not try to overdo it. But, at the end of the day, you want to be in Victory Lane no matter what you’re racing.”

What are your thoughts about Saturday’s race?
“I’m really looking forward to racing at Martinsville (Speedway) this weekend and working with rookie Harrison Burton in only his second NCWTS start. We have two practice sessions on Friday to get the truck dialed in and to make sure Harrison is comfortable behind the wheel. It’s going to be a fun race and the No. 51 team has been working hard to get this truck ready for Saturday.”

KBM-034: The No. 51 DEX Imaging team will race KBM-034 for Saturday’s Alpha Energy Solutions 250. This Tundra won at Martinsville Speedway in 2016 with owner-driver Kyle Busch behind the wheel.

Manion has one top-10 finish in two starts as a NCWTS crew chief at Martinsville.