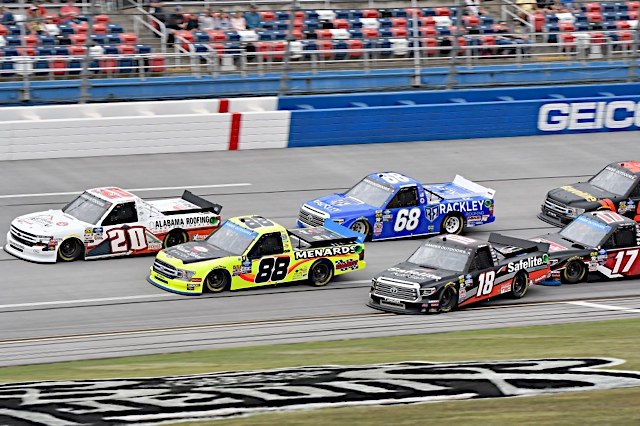 Harrison Burton had an eventful race in his first start in any series at Talladega (Ala.) Superspeedway. Burton started third, but brought out the first caution of the event when things in front of him got bottled up on lap 10 and he spun while trying to avoid making contact with another competitor.

The talented teenager was able to avoid contact with the wall, but flat spotted all four tires and was forced to limp back to pit road. After getting four fresh tires on the Safelite Tundra, he returned to the track one lap down. When Stage One ended Burton received the Lucky Dog and would spend most of the remainder of the race running inside the top five.

Burton would get caught up in the “Big One” with seven laps remaining when Ross Chastain made an aggressive move while leading and clipped Grant Enfinger, who was directly in front of Burton. Once again, Burton was forced to pit road for four fresh tires and repairs to the nose and left side of the No. 18 Toyota.

“We had an up-and-down day. Kind of like Daytona, we went a lap down and came back. Got spun early — I’m not really sure why, I think I might have got touched or maybe just the air. Later in the race I was in a really good position to go for the win in the end and they wrecked in front of us and we got more damage. Fight back to the front again and have a chance to win and then I just didn’t do my part blocking the very top on the last lap. Tough deal, it’s crazy racing like that and a lot of fun racing like that. It’s definitely tough to do, but it was fun to go out and give it a shot.”

Burton fell one spot to 11th in the Gander Trucks driver point standings.

Burton will be back behind the wheel of the No. 18 Safelite AutoGlass Tundra when the NASCAR Gander Outdoors Truck Series resumes action Oct. 26 at Martinsville (Va.) Speedway. Live coverage of the NASCAR Hall of Fame 200 begins Saturday at 1:30 p.m. ET on FS1.