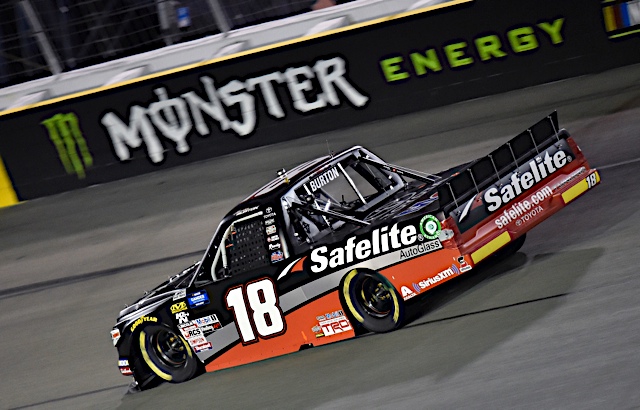 Safelite Driver Moves Up to Second in the NGOTS Championship Standings

Harrison Burton had another solid outing to start his first full-time campaign in the NASCAR Gander Outdoors Truck Series campaign, coming home fifth in The Strat 200 at Las Vegas (Nev.) Motor Speedway. With his first top-five finish on a mile-and-a-half track, the talented youngster moved up three spots to second in the Truck Series championship standings. After three races he sits six tallies behind points leader Grant Enfinger.

“It was all right. We had a great Safelite Tundra. It was a little bit too tight. I was worried about killing our last pit stop so we didn’t make a huge swing on it at the end. I don’t think it would have mattered, it got so stretched out anyway. Really proud of my guys. We fought hard. Had a good Tundra. I am learning, so if I am a little bit more aggressive in the beginning of the race, maybe we come out with a better finish. We also have a truck that’s in one piece and have stage points, which is important. That’s good and we’ll build on that and go to the next one.”

Burton moved up three positions to second in the NGOTS championship standings. After two races he finds himself six tallies behind points leader Grant Enfinger.

Burton will be back behind the wheel of the No. 18 Safelite AutoGlass Tundra when the Truck Series resumes action March 23 at Martinsville (Va.) Speedway. Live coverage of the NGOTS 200 begins Saturday at 2 p.m. ET on FOX.