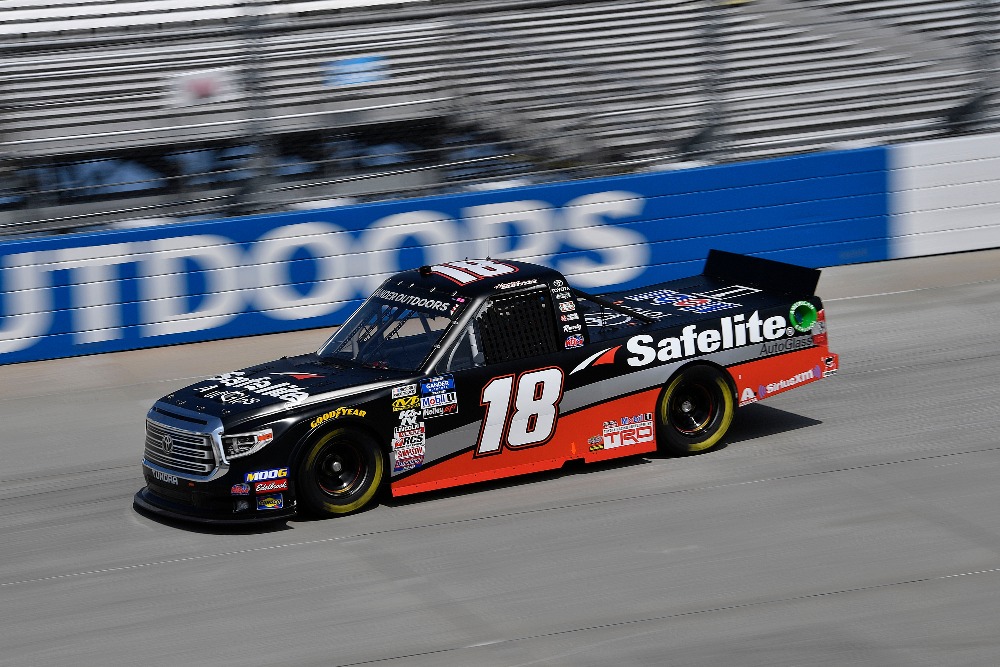 Harrison Burton tied his career-best NASCAR Gander Outdoors Truck Series finish with a third-place result in Friday’s JEGS 200 at Dover International Speedway. After qualifying ninth, Burton positioned the Safelite Tundra inside the top three for the majority of the final two stages, taking the lead momentarily with a three-wide pass with just over 80 laps remaining.

The 18-year-old driver was on the bumper of Sheldon Creed for the lead with just under 50 laps remaining when a two-truck accident slowed the field for the fourth time. Teams hit pit road for their final scheduled pit stop and Burton exited pit road the fourth driver with four fresh tires and lined up sixth for the restart with 41 laps remaining.

The Safelite Tundra was scored in the third spot when the final caution of the race occurred with 10 laps remaining. Burton would maintain the third position on a restart with five laps remaining and crossed the stripe there as well, earning his third-career third-place finish.

Harrison Burton, driver of the No. Safelite AutoGlass Tundra for Kyle Busch Motorsports:

How was the race today?

“It was an up and down day for sure. We had a really good Tundra in the second half of the race and had a chance to win. Made some moves that put us in position to win, but it just never panned out. I got in second behind Ben Rhodes there that last little bit. Just couldn’t get by him. I should have tried the top, but I ran the bottom thinking he would slip up on two tires, but he never did. He stayed committed to the bottom and I got passed on the top. We lost track position there and that put us in the hole for the finish. Always a learning experience. I thought this was a good race for us to rebound from Texas. Come out of here with good stage points and a good finish and move on to Kansas, which is one of my favorite race tracks.”

“It’s fun. I had an up and down kind of day and was trying to make up for some mistakes in the past. I think that if anyone had the run that I did, they would try it and if not, then I don’t think they should be out here. It’s kind of what race car drivers do, we do things that probably aren’t smart, but they’re fun. I enjoy that and enjoy that opportunity to have a truck good enough to get runs like that and put it three-wide.”

Did you get any tips from Kyle Busch on the radio today?

“Kyle (Busch, team owner) was on our radio a lot today and helping me with restarts and stuff. I guess I should listen to him more, the more he talked it seemed the better we got. That’s something that was really helpful today was to have Kyle on our radio helping us and kind of coaching me along. That was definitely a good thing.”

Burton moved up two positions to seventh in the Gander Trucks championship standings. After six races he finds himself 48 tallies behind points leader Grant Enfinger.

Burton will be back behind the wheel of the No. 18 Safelite AutoGlass Tundra when the NASCAR Gander Outdoors Truck Series resumes action May 10 at Kansas Speedway in Kansas City. Live coverage of the Digital-Ally 200 begins Friday at 8:30 p.m. ET on FS1.