Burton Comes from the Back to Finish Seventh at ISM Raceway 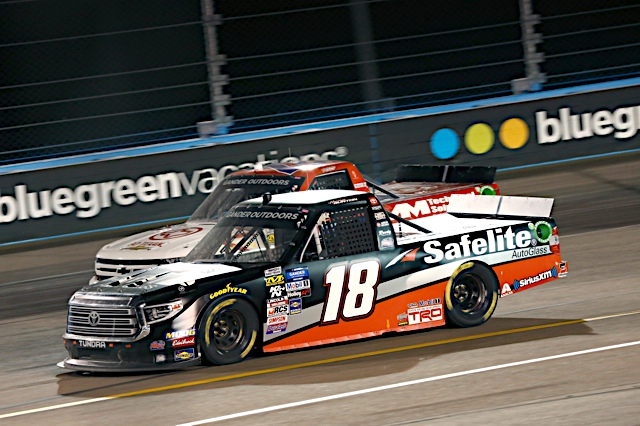 After pacing final practice, Harrison Burton and the No. 18 Safelite AutoGlass team had high hopes for Friday night’s Lucas Oil 150 at ISM Raceway. Unfortunately, Burton had an issue with the power shutting off during his qualifying lap and would have to start the race from the back of the field.

In the early stages, Burton made his way to the top 20 and then crew chief would use pit strategy in the middle of Stage One to improve the track position for his young driver in the later stages. After getting four fresh tires under caution on lap 25, the No. 18 team set themselves up to start Stage Two inside the top five and would run inside the top 10 for the remainder of the event.

“We started in the back, which didn’t help us any. We had to find our way through a lot of traffic and a lot of crazy moments. Air is really big here, bigger than it was here last year. We really struggled with getting tighter behind people. I don’t know if that’s something we did different, or something that is different about the package. The splitters are a little different. It was a tough race. We were really, really good in practice and I thought we were going to have a shot at the pole, and a shot to win and lady luck just had other ideas.”

Burton will be back behind the wheel of the No. 18 Safelite AutoGlass Tundra when the NASCAR Gander Outdoors Truck Series resumes action Nov. 15 at Homestead-Miami (Fla.) Speedway in. Live coverage of the Gander Trucks season finale begins Friday at 8 p.m. ET on FS1.