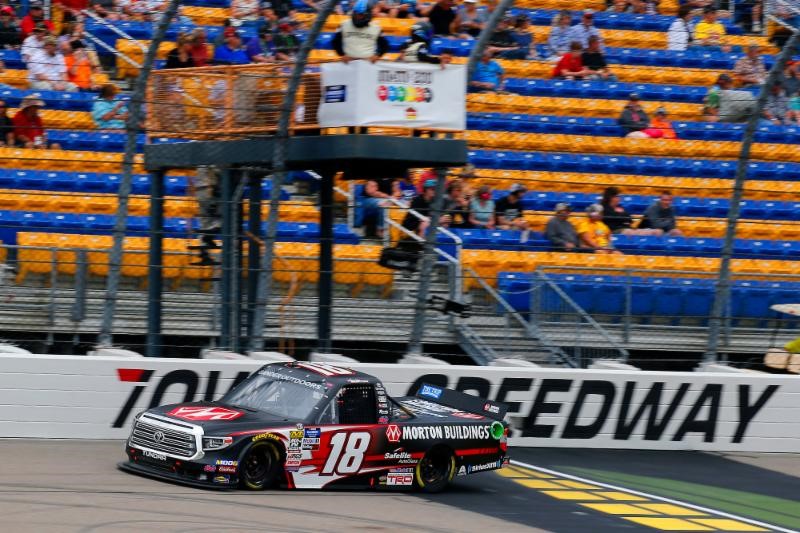 For the fourth time in his young career, 18-year-old Harrison Burton came home third in a NASCAR Gander Outdoors Truck Series race. Burton recorded a career-beset third-place finish in the 2018 race at Iowa Speedway and matched that result in Sunday’s M&M’s 200 at the 0.875-mile oval. The second-generation driver also scored third-place finishes last November at ISM Raceway in Avondale, Ariz., and earlier this season at Dover (Del.) International Speedway.

In a race that was postponed a day because of rain, it appeared that the Morton Buildings team would end the day with a fourth-place finish, but Ross Chastain’s team, who crossed the stripe as the winners, failed post-race technical inspection and were disqualified.

Harrison Burton, driver of the No. 18 Morton Buildings Tundra for Kyle Busch Motorsports:

Were you expecting more out of your race?

“We had a tough race because we had really high expectations for Iowa. We had a chance to win last year and ran fourth this year, which isn’t bad. Had a good points day overall, just really had to battle there. Really struggled firing off and couldn’t get spots on restarts, but over the long runs we could maintain and get better and better. Pretty fun. I love this race track. It’s a lot of fun to pull slide jobs on people and things like that – it’s like a dirt track sometimes. I’m proud of the way we fought and had good pit stops and made it work.”

Burton moved up two positions to sixth in the Gander Trucks championship standings. After 10 races he finds himself 93 tallies behind points leader Grant Enfinger.

Burton will be back behind the wheel of the No. 18 Safelite AutoGlass Tundra when the NASCAR Gander Outdoors Truck Series resumes action June 22 at World Wide Technology Raceway at Gateway in Madison, Ill. Live coverage of the Carshield 200 begins Saturday at 10 p.m. ET on FS1.