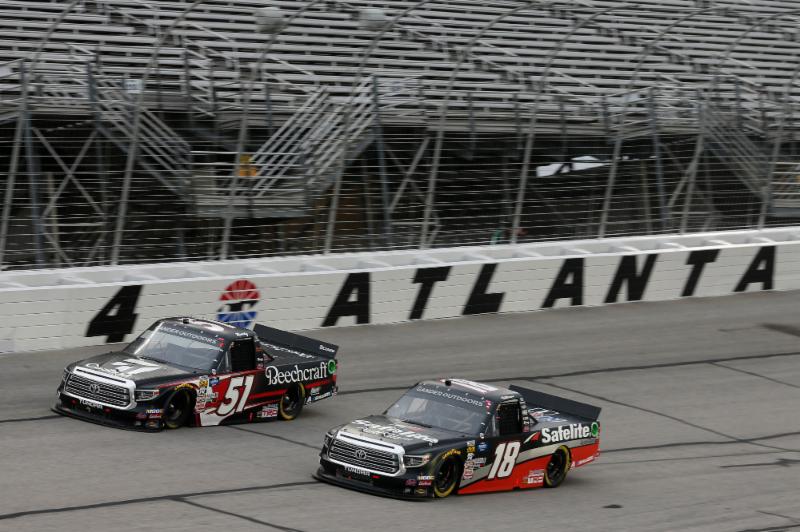 Safelite Driver Gets Shuffled Back on Late-Race Restart

Harrison Burton ran inside the top three for the majority of Saturday’s Ultimate Tailgating 200 and was lined up on the front row alongside his owner and teammate Kyle Busch when the field took the green flag with five laps remaining. Unfortunately for Burton, the outside lane lacked grip and he didn’t get up to speed as fast as the inside line and lost several positions. Busch would go on to pick up a NASCAR Gander Outdoors Truck Series’ record 52nd win, while Burton would be forced to settle for an undeserving eighth-place finish.

Talk about starting in the outside lane on that restart.

“The outside is really bad here, especially when you have Kyle Busch to your inside. I thought I got an alright launch in my Safelite Tundra at first and then getting from third to fourth was really hard struggling with spinning the rear tires. I’m bummed out. I raced my butt off all night and it just didn’t get our way. I want to win one of these really damn bad, so that kind of hurts. We’ll be back and there’s a lot more races in the year. We got pretty good points today. I’m not really sure where we ended up after all that, but we had some good stages and had a pretty decent finish. We deserved better. The guys deserved better, but we’ll come back and get them next time.”

How would you assess this race?

“This race was good for us. I felt like as a team we built some momentum. I felt like the middle part of the race we were really strong and running the top and passing a lot of trucks. I feel like as a team, we passed quite a few trucks, so that’s a good thing. My pit crew did really good, so we have a lot of things to build off of going into Vegas and that’s good for us. It makes our job a little bit less stressful having a little bit of fun and knowing that we have speed. Just need to be in the right lane on the next one.”

Burton moved up 12 positions to fifth in the NGOTS championship standings. After two races he finds himself 24 tallies behind points leader Grant Enfinger.

Burton will be back behind the wheel of the No. 18 Safelite AutoGlass Tundra when the Truck Series resumes action March 1 at Las Vegas (Nev.) Motor Speedway. Live coverage of the Strat 200 begins Friday at 9 p.m. ET on FS1.