Burton Battles to a Top-Five Finish at Texas 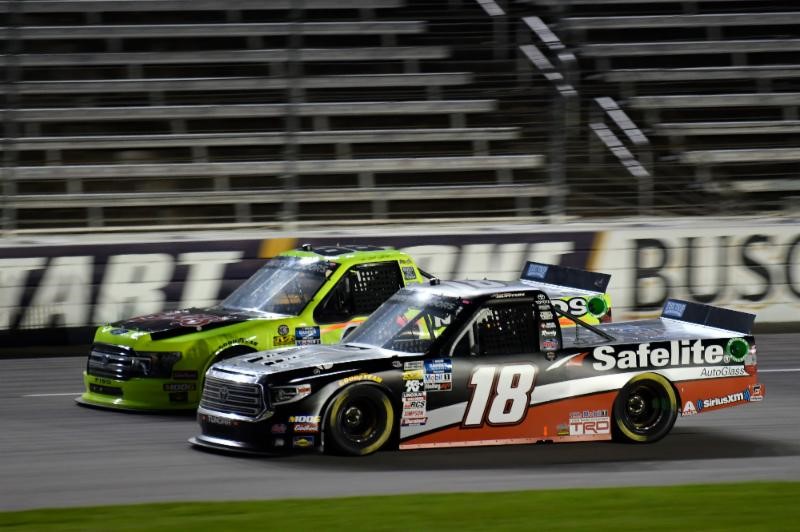 Harrison Burton battled his way from the 11th starting position to register a fifth-place finish in Friday night’s SpeedyCash.com 400 at Texas Motor Speedway. Burton recorded his third top-five finish of 2019 despite having to overcome a pit road penalty for an uncontrolled tire near the halfway mark of the race and he also sustained minor damage to the left side of his Safelite AutoGlass Tundra in the Final Stage.

“We had an up and down night tonight. I kind of buried us not qualifying as well as we should of and then we had to fight back a ton from coming and getting stage points and then falling back to 21st after an uncontrolled tire penalty. A whole bunch of things happened and it was impressive how we fought through it and these boys kept fighting. That was the hardest I’ve ever had to drive for a fifth-place finish. Our Safelite AutoGlass Toyota Tundra was a little bit damaged and it made us really tight at the end, but I was able to hold off the 2 at the end — which was good for playoff points. I think that puts us in eighth, but that doesn’t really matter, we just have to go and win Iowa and then it won’t matter anyway. Excited to go there and hopefully kick butt.”

Burton moved up one position to eighth in the Gander Trucks championship standings. After nine races he finds himself 86 tallies behind points leader Grant Enfinger.

Burton will be back behind the wheel of the No. 18 Morton Buildings Tundra when the NASCAR Gander Outdoors Truck Series resumes action June 15 at Iowa Speedway in Newton. Live coverage of the M&M’s 200 begins Saturday at 8:30 p.m. ET on FS1.