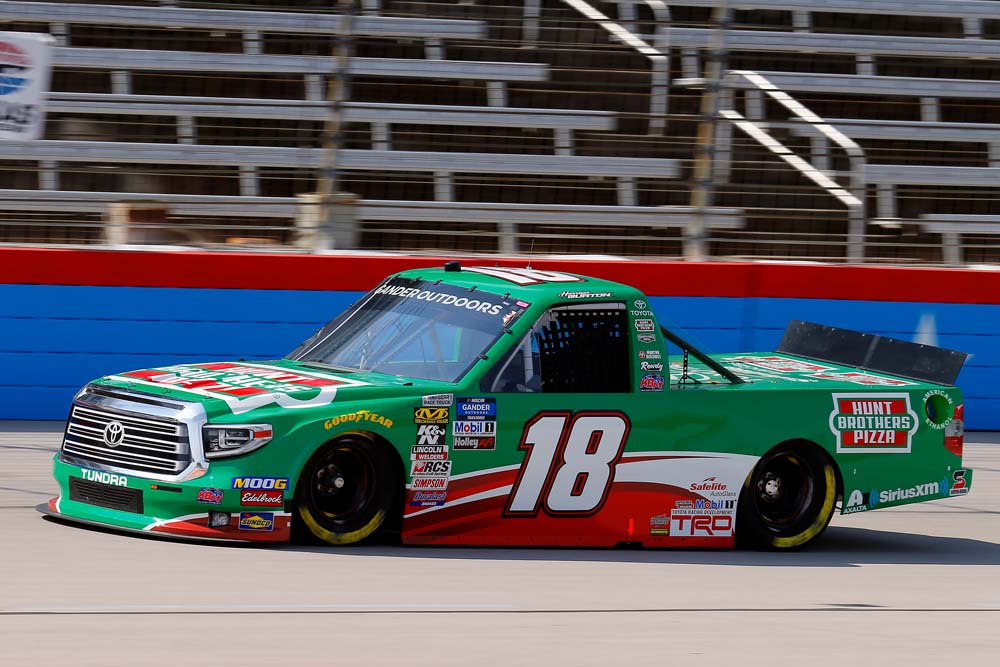 Harrison Burton showed that he had a fast Hunt Brothers Pizza Tundra in the opening laps of Friday night’s Vankor 350 NASCAR Gander Outdoors Truck Series event at Texas Motor Speedway in Fort Worth when catapulted from his 10th starting position to the sixth spot in just two laps. After his Kyle Busch Motorsports’ (KBM) teammate Todd Gilliland got squeezed into the wall by the No. 45 truck to bring out the first caution of the race on lap five, Burton became the second victim of the No. 45 trucks early aggression when he got the air taken off his spoiler on lap 12 and went caroming into the outside wall.

The over-the-wall crew made a feverish attempt to repair the major damage to Burton’s Toyota before the crash damage clock expired, but as he was exiting his pit stall to return to the track lost power and came to a stop on pit road ending his night prematurely.

What happened to take you out of the race early tonight?

“I’m not entirely sure. I haven’t seen any replays or anything, but it felt like the 45 just got really close and took the air off our spoiler, and that’s hard to avoid here. Everyone is racing so hard for position, and you have to get aggressive here, especially on these restarts, because on the green flag when you get a little bit more strung out, it’s so hard to pass. Man, I hate that so bad. We had a good Hunt Brothers Pizza Tundra and we made a good charge on the first restart and went from 10th to sixth – I think – so I was pretty excited about that. I was looking forward to the rest of the race, but I didn’t quite get to run it. Hopefully we come back on the next one and win, but right now I kind of want to scream.”

Burton will be back behind the wheel of the No. 18 Safelite AutoGlass Tundra when the NASCAR Gander Outdoors Truck Series resumes action May 3 at Dover (Del.) International Speedway. Live coverage of the JEGS 200 begins Friday at 5 p.m. ET on FS1.