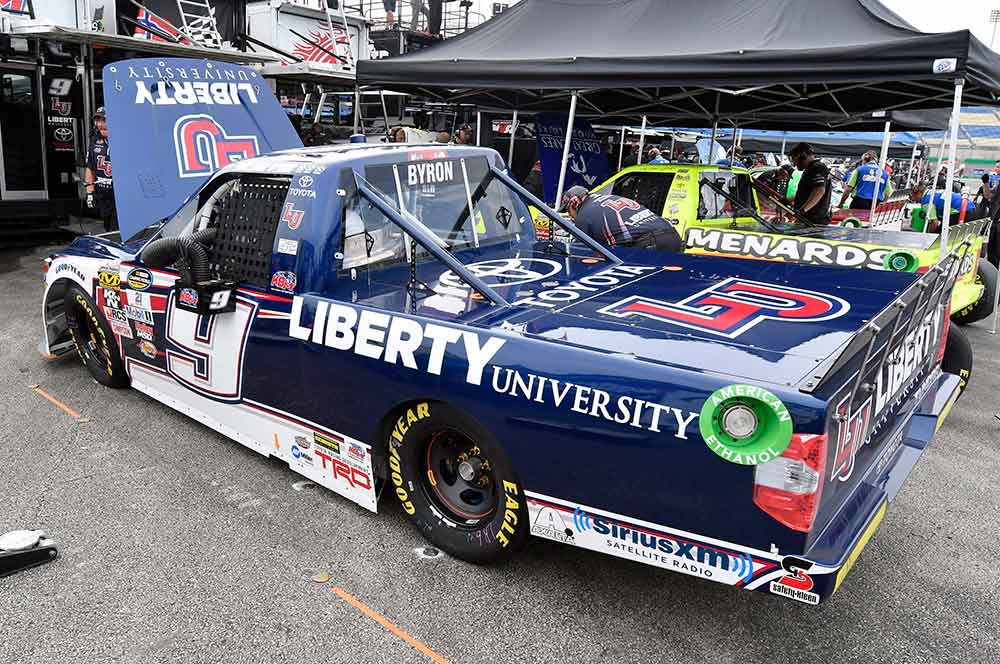 MOORESVILLE, N.C. (August 15, 2016) – Over the years, Bristol (Tenn.) Motor Speedway has not typically been kind to rookies. However, William Byron is no ordinary rookie. With his fifth NASCAR Camping World Truck Series (NCWTS) victory at Pocono (Pa.) Raceway, he broke the record for most wins in a rookie season in the series. Byron leads the regular-season point standings and has a 19-point lead in the rookie standings as well. With his place secured in the inaugural NCWTS Chase, he has his sights set on his sixth win of the season this week at Bristol.

This will not be Byron’s first time racing at the half-mile bullring. He competed in a NASCAR K&N Pro Series East race there in 2015 when he started fourth and led 44 laps en route to a second-place finish. He was also able to test his Liberty University Tundra there in the spring, which gave him valuable experience to learn the different aerodynamics and handling of the trucks at Bristol. Ever since that test in April, Byron has been chomping at the bit to race there again.

The Kyle Busch Motorsports team will be bringing a race-winning Tundra to Bristol for Wednesday night’s UNOH 200. Chassis KBM-031 is the same Tundra Byron led 107 laps with and then drove to Victory Lane at Iowa Speedway in June for his third win of the season. He also finished third with it at Martinsville (Va.) Speedway in April.

Although he is already locked into the Chase, Byron has as much determination as ever to win as many of the next four races as he can before the Chase begins at New Hampshire Motor Speedway. The rookie phenom intends to continue breaking records and winning races right up through the season finale at Homestead-Miami Speedway to decide the championship.

What did you learn at the Bristol test earlier this season?
“I think the biggest thing was learning what we needed for the race. We tested just after the Cup race in April, so we were able to have the right track conditions with rubber on the track to help our Tundras feel a little bit better and faster. I think just learning how to run the top groove and getting acclimated with what Bristol is like, especially in a truck, was important. I raced there in a K&N car last year, but this was a lot different.”

Have you raced at a track comparable to Bristol before?
“The late model race I ran at Anderson (Ind.) Speedway last month was probably as close as I’ve come to a track like Bristol. Bristol is a totally different animal and it is kind of like a roller coaster with the high banking and how small it is. It’s totally different than anything I’ve been to, but I learned a lot in the K&N race last year so that was a good experience.”

What does it mean to you to break the record for most wins by a rookie in the NCWTS?
“It means a lot to me and our team to achieve that goal. Getting that checked off the list and not having to stress about whether we were going to get another win really helps the determination of the team. Every week I go to the track worried about if we are going to get another win this year. I told myself after Pocono we could go to the track every weekend and win, but Bristol is like no other, so we’re going to prepare as best we can to keep that streak going.”

What makes Bristol challenging for a crew chief?
“Bristol is tough because everything happens so fast there. It’s hard to have communication between the driver and the team because we get around there in 15 seconds, so the entry, middle and exit are all kind of tied together. Picking it apart to figure out how to fix the handling and what’s important is more difficult than normal.”

Fugle has one win as a crew chief in two starts at Bristol in the Truck Series. Kyle Busch took the win in 2013 after starting 10th and leading only seven laps. Fugle finished sixth with Erik Jones in 2015.