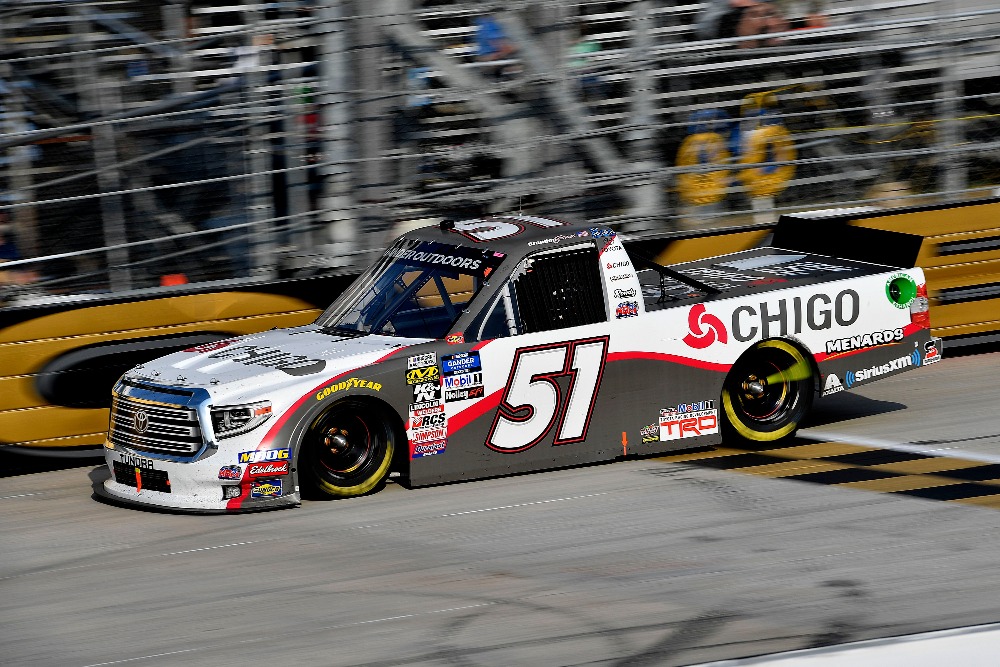 Brandon Jones earned a 13th-place finish in his first NASCAR Gander Outdoors Truck Series start in a Kyle Busch Motorsports Tundra this season. The young driver made five starts for KBM last season. After one round of single-truck qualifying, Jones earned the 19th starting position. Crew chief Rudy Fugle and the No. 51 team worked on the No. 51 Chigo Tundra throughout the weekend, and Jones was able to make it in to the top-10 several times, but could not maintain the position and fell to 13th in the closing laps.

How did your day go?

“We just fought an ill handling truck all weekend long. Overnight they did a lot of changes to my Chigo Tundra. They actually didn’t make it too bad for qualifying, so I was surprised we qualified where we did. And then in the race, nothing really worked for it all day long. It definitely wasn’t from lack of effort, I really enjoyed working with Rudy (Fugle, crew chief) and working with these guys on the 51 team. It was great to have Chigo on the truck and we’re looking forward to getting back to Kansas next week. “

Todd Gilliland, driver of the No. 4 Toyota Tundra, finished 15th

Harrison Burton, driver of the No. 18 Toyota Tundra, finished 3rd

Raphael Lessard, driver of the No. 46 Toyota Tundra, finished 11th

The No. 51 team leaves the sixth race of the season ranked first in the Truck Series Owner’s Championship Standings, 39 markers ahead of second-place.

Brandon Jones will be behind the wheel of the No. 51 Tundra when the Truck Series returns to action Friday, May 10 at Kansas Speedway in Kansas City, Kan. Live coverage of the Digital Ally 250 begins at 8:30 p.m. EST on FS1.