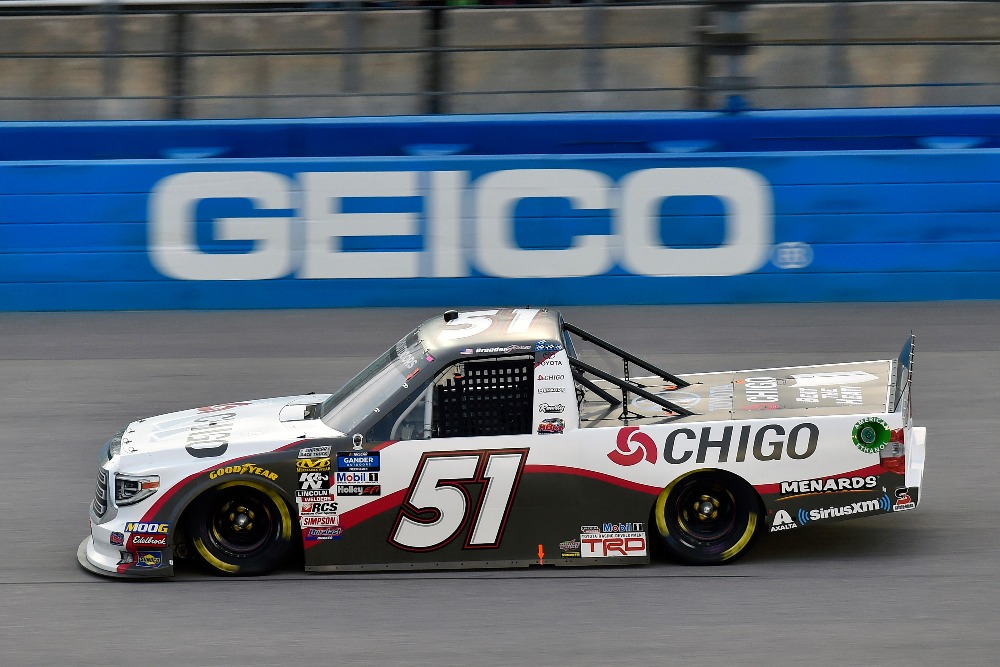 Brandon Jones and the No. 51 Chigo team rebounded from an early spin to earn a top-five finish in the Digital Ally 250 at Kansas Speedway. It was Jones’ second start with the 51 team this season, following a 13th-place finish last weekend at Dover (Del.) International Speedway. The 22-year-old driver posted the 15th and 12th-fastest speeds respectively in two early practice sessions on Friday morning, then qualified the Chigo Tundra 21st in one round of single vehicle qualifying. On lap 26, Jones lost control of his Tundra and spun with a flat left rear tire, but was able to keep the damage minimal. Crew chief Rudy Fugle and the No. 51 crew quickly made repairs and changed tires, then worked on adjustments to improve the handling for the rest of the night. Jones went one lap down, but was able to get back on the lead lap at the end of the first stage. Then he slowly moved toward the front of the field, working into the top 10, and over the course of several late race cautions as the leaders encountered trouble, he made his way into the top-five.

How were you able to come back from the early spin to claim and top-five finish?

“I fought loose all night in the truck. We were really tight in practice and I was pretty surprised about that. I just could never get it out of it. I guess we found our limit the first run there. All in all, that’s why you don’t give up in these races. You can always come back to get inside the top-five for the finish and have a shot to get to victory circle. Everybody at KBM kept their heads in the game and looking forward to getting to the next one with these guys.”

Todd Gilliland, driver of the No. 4 Toyota Tundra, finished 3rd

Harrison Burton, driver of the No. 18 Toyota Tundra, finished 10th

Riley Herbst, driver of the No. 46 Toyota Tundra, finished 9th

The No. 51 team leaves the seventh race of the season ranked first in the Truck Series Owner’s Championship Standings, 25 markers ahead of second-place.

Owner-driver Kyle Busch will be behind the wheel of the No. 51 Tundra when the Truck Series returns to action Friday, May 17 at Charlotte (N.C.) Motor Speedway. Live coverage of the N.C. Education Lottery 200 begins at 8:30 p.m. EST on FS1.