Brandon Jones Earns Runner-Up Finish to Send No. 51 to Championship Fight in Miami 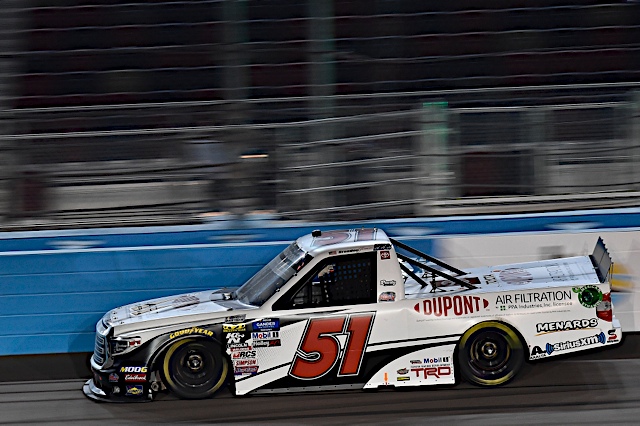 Brandon Jones rebounded from Lap 3 spin to earn a runner-up finish and lock the Kyle Busch Motorsports No. 51 into the owner’s championship battle at Homestead-Miami (Fla.) Speedway next week. In practice early Friday morning, Jones was 11th-fastest in first practice and fifth-fastest in the final Gander Trucks practice session. On Friday afternoon in one round of single vehicle qualifying, the No. 51 DuPont Air Filtration/Menards team earned the seventh starting spot with a lap of 27.121 seconds and 132.738 mph.

After a spin in the opening laps of the race, Jones and crew chief Rudy Fugle utilized pit strategy and made adjustments to the No. 51 Tundra to get back to the front, taking the lead on Lap 65 and winning Stage 2, leading again in the final stage for six additional laps. Despite a valiant effort in the closing laps, Jones was held to the runner-up spot, marking the 10th time the No. 51 has finished first or second this season.

What more did you need in the closing laps?

“We were close. I hate it for these guys. I wanted to win a Truck race. Who knows, I may have an opportunity in the future to do it again. These guys build awesome trucks and I’ve neer been able to run for a team quite like this, and it’s been fun this year. They’re going to go for a championship at Homestead, hopefully they can pull it off. Good luck to Rudy (Fugle, crew chief) and all those guys. DuPont came on board this weekend. I should have hit him maybe in turns three and four, but I don’t know, that comes back around, too. Maybe it will help me out in the future, but I doubt it.”

Todd Gilliland, driver of the No. 4 Toyota Tundra, finished 14th

Harrison Burton, driver of the No. 18 Toyota Tundra, finished 7th

Chandler Smith, driver of the No. 46 Toyota Tundra, finished third

The No. 51 team leaves the penultimate race of the season ranked third in the NASCAR Gander Outdoors Truck Series Owner’s Playoff Standings. Next week at Homestead-Miami Speedway, the No. 51 will contend for the Owner’s Championship with the No. 52, No. 45 and No. 24. The No. 51 has earned six wins, 14 top-five finishes and 16 top-10 finishes in 2019, recording an average starting position of 8.0 and an average finish of 6.7.

Christian Eckes is scheduled to pilot the No. 51 Tundra in the season finale at Homestead-Miami (Fla.) Speedway, when the Gander Trucks Series returns on Friday, Nov. 15. Live coverage of the event begins at 8 p.m. EST on FS1.