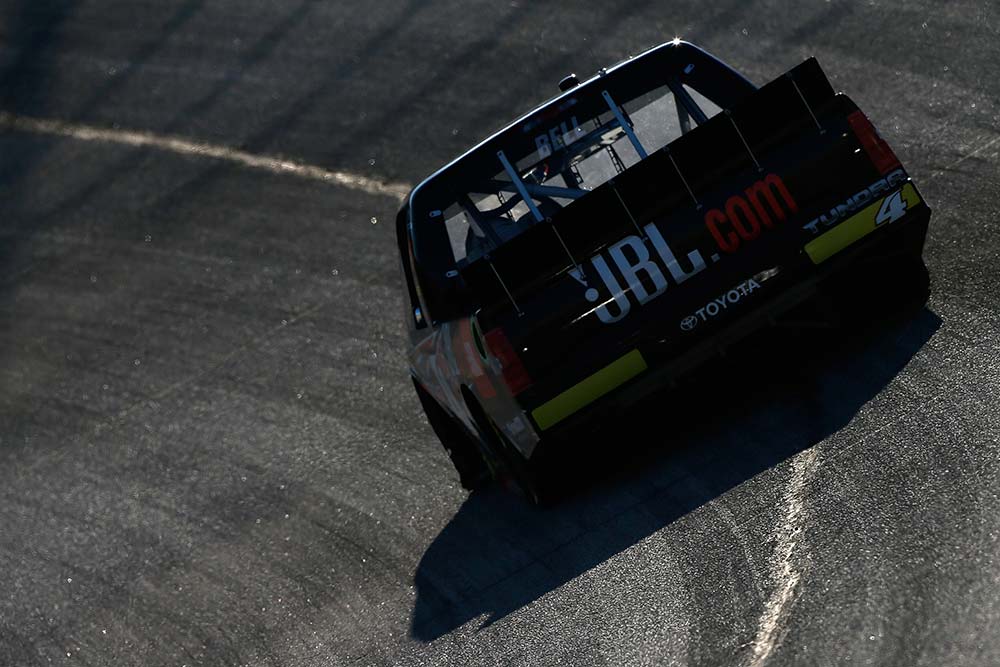 Christopher Bell led three times for 42 laps in Saturday’s Great Clips 200 at Atlanta Motor Speedway Hampton, Ga., and had a 0.8 second lead with eight laps remaining when the right front tire on his No. 4 JBL Tundra blew exiting Turn 4. Bell’s Toyota slammed hard into the outside wall and ended the 21-year-old driver’s bid for his first NASCAR pavement win and Kyle Busch Motorsports’ (KBM) first win at the 1.54-mile Georgia track.

Bell started the race from the third position, but was able to work his way around pole sitter Matt Crafton to take the lead for the first time on lap 7. The talented rookie would remain out front until he communicated to crew chief Jerry Baxter that he had a right front tire going down on lap 26 and subsequently brought his Tundra to the attention of the No. 4 over-the-wall crew under green. After getting four fresh tires and a full tank of fuel, he returned to the track scored one lap down in the 30th position.

On lap 37, the yellow flew for the first time when the newly implemented 20-minute caution clock expired for the first time in NASCAR Camping World Truck Series history. Baxter kept his young driver on the track to receive the “wave around” and return to the lead lap. Bell restarted from the 21st position when the field went back green on lap 21.

Bell had advanced to the 14th position when KBM teammate William Byron experienced a mechanical issue while running second on lap 60. The JBL Tundra came down pit road for a four-tire and fuel stop and returned to the track in the 11th position for the lap-68 restart. After going back green, the rookie made his way back inside the top five on lap 71, moved up to third on lap 88 and on lap 90 was in the runner-up position.

The JBL Tundra was back at the front of the field on lap 92 and Bell radioed to Baxter and his crew that “this is a dream machine.” The talented wheelman had opened up a one second lead when the caution clock expired for the second time of the race. When pit road opened the Oklahoma native came to the attention of his over-the-wall crew, but as he was entering his box was blinded by the sun and couldn’t get stopped properly inside of it. The crew quickly pushed him back into a legal position and administered the four-tire and fuel stop.

The miscue on pit road left the No. 4 JBL Tundra scored in the fifth position when the field went back green with 19 laps remaining. The bottom line surged on the restart and Bell found himself tucked in behind the top two trucks, who were side-by-side for the lead, as the field headed down the backstretch. Exiting Turn 2, the youngster experience an aero push and his truck made contact with the left rear of KBM teammate Daniel Suarez who then turned down into Crafton. Both Suarez and Crafton had major damage and were unable to continue, but Bell escaped with minimal damage.

The No. 4 JBL Tundra was scored in the fourth position when the field went back green on lap 115. With 14 laps remaining, John Hunter Nemechek moved up to block a strong run for the lead from Bell, but Bell was able to complete a crossover pass and regained the lead with 14 to go. The No. 4 JBL Tundra slowly pulled away and had a 0.7 second lead before the tire issue ended an eventful day.

“I’m still learning the effect aero has on these trucks and I feel really bad that the mistake I made ruined the day for Matt (Crafton), Daniel and their teams,” Bell said. “I’m super thankful for the opportunity I have this year driving the JBL Tundra for Kyle Busch Motorsports and this No. 4 team. They gave me an amazing Tundra today and I know that wins are just around the corner.”

“We had a fast truck — the JBL Tundra was great,” Baxter said. “We had a lot of issues during the race with little things. Christopher has a lot to learn — he’s young. I hate that we got into it with our teammate and Matt (Crafton) there, but we showed a lot of promise and I think when we get our hands around all of this we are going to win a lot of races. I’m pretty proud of the whole team — they put together a good piece. That’s good for KBM and Toyota.”

Nemechek collected his first victory of 2016 and his second career victory in NASCAR’s third division. Cameron Hayley 0.305 seconds behind Nemechek in the runner-up position. Timothy Peters was third, while Daniel Hemric and Grant Enfinger rounded out the top-five finishers. Suarez and Byron finished 31st and 32nd, respectively.

The second race of the 2016 season featured five cautions for a total of 25 laps. There were seven lead changes among four drivers, including Bell who led three times for 42 laps.

Bell, who leaves Atlanta 21st in the point standings, will be back behind the wheel of the No. 4 JBL Tundra when the Truck Series resumes action April 2 at Martinsville (Va.) Speedway. Live coverage of the Alpha Energy Solutions 250 begins with the NCWTS Setup Show at 2 p.m. ET.