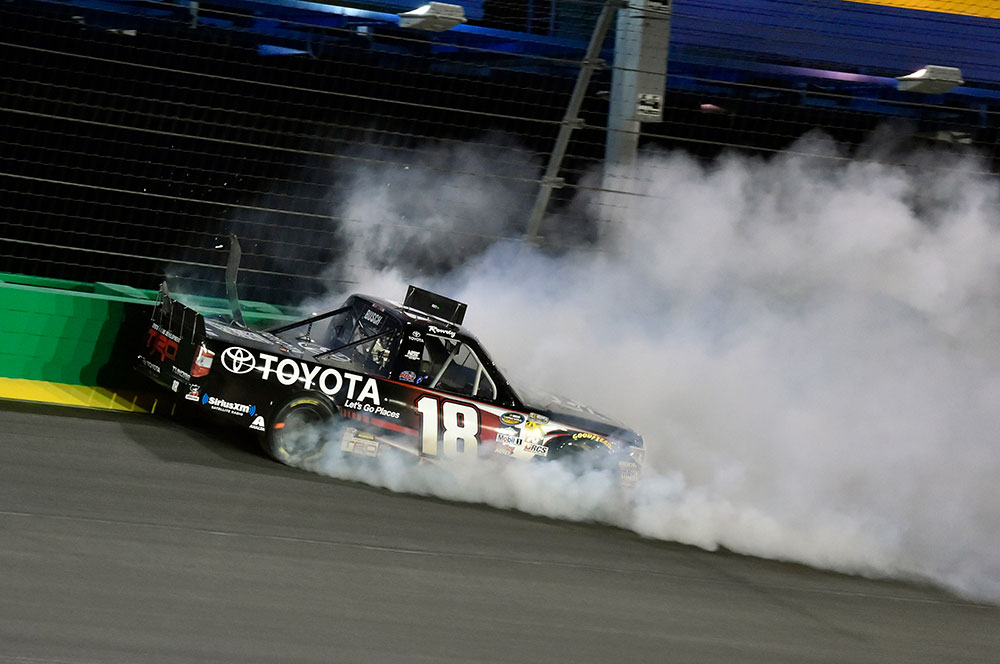 It was a bittersweet Thursday night at Kentucky Speedway in Sparta for Kyle Busch. Busch the driver ended the night with a torn up No. 18 Toyota Tundra and a 30th-place finish, but Busch the owner saw William Byron collect his organization’s record-breaking 51st career victory helping Kyle Busch Motorsports (KBM) become the winningest team in the history of the NASCAR Camping World Truck Series.

“I don’t know, I had a run on the outside and thought I left enough room on the outside,” Busch said of the lap-57 incident with the No. 23 truck. “Got hit and spun into the wall. It’s a real shame. All these guys at KBM (Kyle Busch Motorsports) built a brand new piece and it was really good. It was self-inflicted wounds that we kept getting ourselves back in traffic and hurt ourselves with track position there. We had a really fast Tundra and was able to pick off spots on the outside and on the inside. I was just trying to bide my time and thought I made a smart move and ended up getting wrecked. That’s all there is to it.”

“This is certainly a huge milestone for us at Kyle Busch Motorsports, myself and for Samantha,” Busch the owner said of his organization’s milestone. “I think more importantly for all the people that work at Kyle Busch Motorsports as well for those that have spent all the long hours and put the blood, sweat and tears into our Toyota Tundras each and every week that are fast all the time. That’s one of the things we always strive for. We’re not here to just be around the race track – we want to go out and have the opportunity to win each and every week. Overall what’s most amazing about this 51st win is the amount of starts Kyle Busch Motorsports has had and being able to achieve this victory in the short period of time and the year span it has taken to get to that level, too. Again, it’s due to a lot of great people and dedication and a lot of hard work. We’ll keep doing all that and striving to be our best and do our best and we also have really good drivers behind the wheel. I can’t not mention William Byron here as well as Erik Jones, myself of course, Brian Scott, Denny Hamlin, Kasey Kahne, Christopher Bell and Bubba Wallace. A lot of great talent has been behind the wheel of our trucks and we look forward to what talent we can get behind the wheel in the future.”

Busch started from the seventh position and worked his way into the fifth position by the time the first caution of the race occurred on lap 26. Despite advancing forward, he reported that the splitter of his No. 18 Tundra was digging into the race track causing it to be extremely tight. Crew Chief Wes Ward summoned his driver to pit road where the over-the-wall crew administered a four-tire and fuel stop, but also sent an extra member over the wall to help go under the hood for a chassis adjustment to help raise the splitter.

After the penalty for the extra crew member, Busch took the lap-35 restart at the tail end of the field in the 21st position. He had advanced back up to 14th by the time the next caution occurred five laps later, but the team elected to get off sequence with the leaders and came down pit road to top off with fuel. The decision was in an effort to improve track position because if the next green-flag run went all the way to the caution clock, the majority of the teams on the lead lap would have to pit before the clock expired.

As Busch was making his way back through the field, he was in the 13th position on lap 57 when he attempted a three-wide pass on the outside lane. As he was maneuvering past the No. 23 truck, it got loose in the middle lane and slid up the track and clipped the rear end of Busch’s Tundra. The contact sent the No. 18 Toyota Tundra crashing into the outside wall and causing terminal damage to the rear end of the vehicle.

Byron’s win was his fourth of 2016 and the sixth in 10 races for KBM this season. The victory was KBM’s 51st and moved the team past Roush Fenway Racing into sole possession of the all-time wins mark in the Truck Series. John Hunter Nemechek finished 0.190 seconds behind Byron in the runner-up spot. Daniel Hemric, Christopher Bell and Johnny Sauter rounded out the top-five finishers.

Daniel Suarez in KBM’s No. 51 ARRIS Tundra started from the pole and led three times for 59 laps, but was plagued by a speeding penalty late in the race and finished 11th.

The 10th race of the 2016 season featured five cautions for a total of 32 laps. There were nine lead changes among six drivers.

Busch will be back behind the wheel of the No. 18 SiriusXM Tundra Wednesday, Aug. 17 at Bristol (Tenn.) Motor Speedway. Live coverage of the UNOH 200 begins with the NCWTS Setup show at 8:00 p.m. ET on Fox Sports 1.