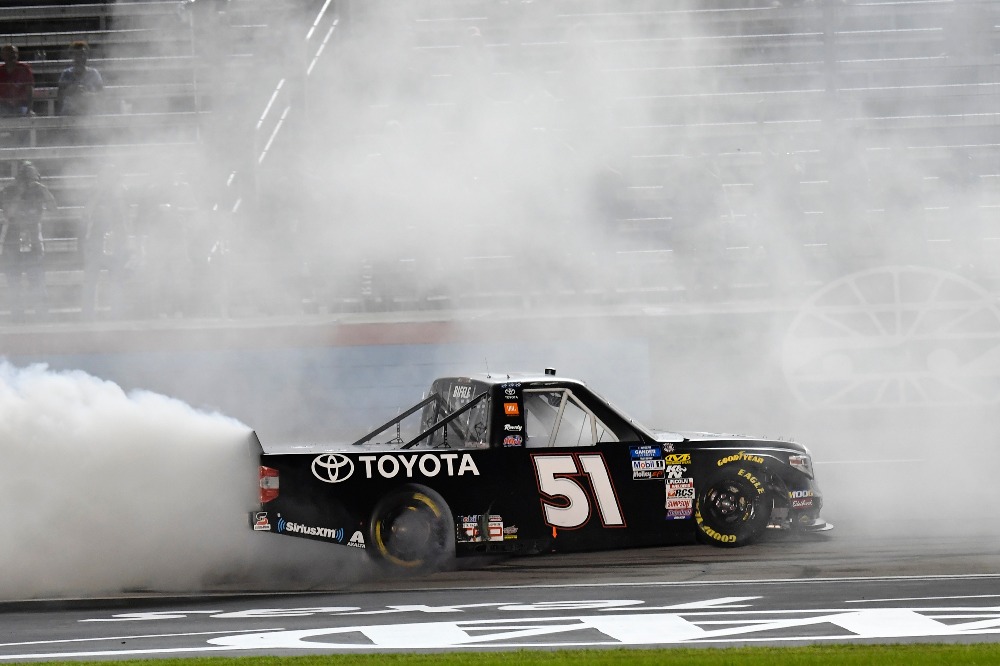 Greg Biffle made a triumphant return to the NASCAR Gander Outdoors Truck Series on Friday night at Texas Motor Speedway and picked up the sixth win for the No. 51 team this season. After a 15-year hiatus from the series and three years away from NASCAR, the 49-year-old veteran driver picked up his 17th career win in the Gander Trucks. The 51 team posted the 11th, 12th and 16th-fastest times in three practices respectively on Thursday afternoon, and then Biffle qualified his Tundra in the sixth position in one round of single-vehicle qualifying.

After Biffle and crew chief Rudy Fugle fine tuned the No. 51 Tundra in practice, the veteran driver knocked the cobwebs out and began the race in the sixth position. After two hot and sticky afternoons, the track began to cool as the sun set, changing the handling conditions for the race vehicles. Biffle and Fugle made a gamble on fuel mileage in the final stage, and it paid off, earning them a trip to Victory Lane.

Greg Biffle, driver of the No. 51 Mobil 1 Tundra for Kyle Busch Motorsports:

You are here because Kyle Busch asked you to drive this truck. What does this win mean to you?

“It means a lot to me that Kyle gave me this opportunity to come back and drive this truck. Thanks to everyone that stood behind Kyle Busch Motorsports, Mobil 1. This Gander Outdoors Truck Series has a lot of competitive trucks, and these guys make the difference. These guys are a great group of guys that Kyle put assembled. TRD, Toyota ran great today. I am just excited to be here. I don’t even know what to say. I am so thankful for all the opportunities I have had to drive great trucks. This thing was really fast. It was hard to figure out how to pass here. It was my first time with this package, so it took me a little bit, but I got used to it in the end.”

How was it out there?

“It was not easy. I had my work cut out for me. At the beginning of the race, so much odd stuff happened. We ran five laps at a time and then the caution would come out. There was a lot of people wrecking in front of me and behind me. I was just trying to keep the truck clean and stay out of trouble. Then we got four-wide off of turn 2, and I didn’t know you could do that here. We beat the fenders in a bit, but the Mobil 1 Toyota ran really good tonight. I want to thank those guys for coming on board and helping us. Kyle Busch assembles a great group of guys. The pit stops were phenomenal. Rudy (Fugle, crew chief) did a great job calling the race from the top of the box. It’s not easy to win these, but I can see how Kyle has done very well.”

Todd Gilliland, driver of the No. 4 Toyota Tundra, finished 27th

Harrison Burton, driver of the No. 18 Toyota Tundra, finished fifth

The No. 51 team leaves the eighth race of the season ranked first in the Truck Series Owner’s Championship Standings, 32 markers ahead of second place.

Sixteen-year-old Chandler Smith is scheduled to be behind the wheel of the No. 51 at Iowa Speedway, making his first Gander Outdoors Truck Series start Saturday, June 15. Live coverage of the M&M’s 200 begins at 8:30 p.m. EST on FS1.