Bell Wins by Two Steps in a Texas Shootout 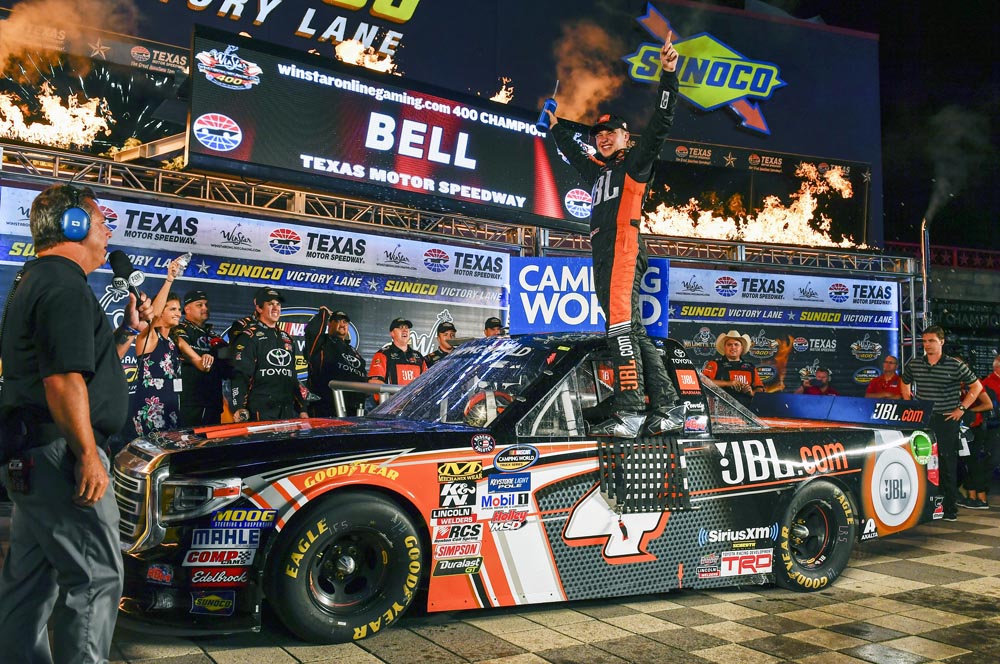 Christopher Bell came from the 21st starting position to win Friday night’s Winstaronlinegaming.com 400 NASCAR Camping World Truck Series event at Texas Motor Speedway in Ft. Worth. The 22-year-old driver, who grew up just over two hours away from the 1.5-mile venue, led 92 of the final 98 laps and was inches ahead of Chase Briscoe when the field was frozen after a three-truck accident ended the race under caution during a two-lap shootout to the finish. 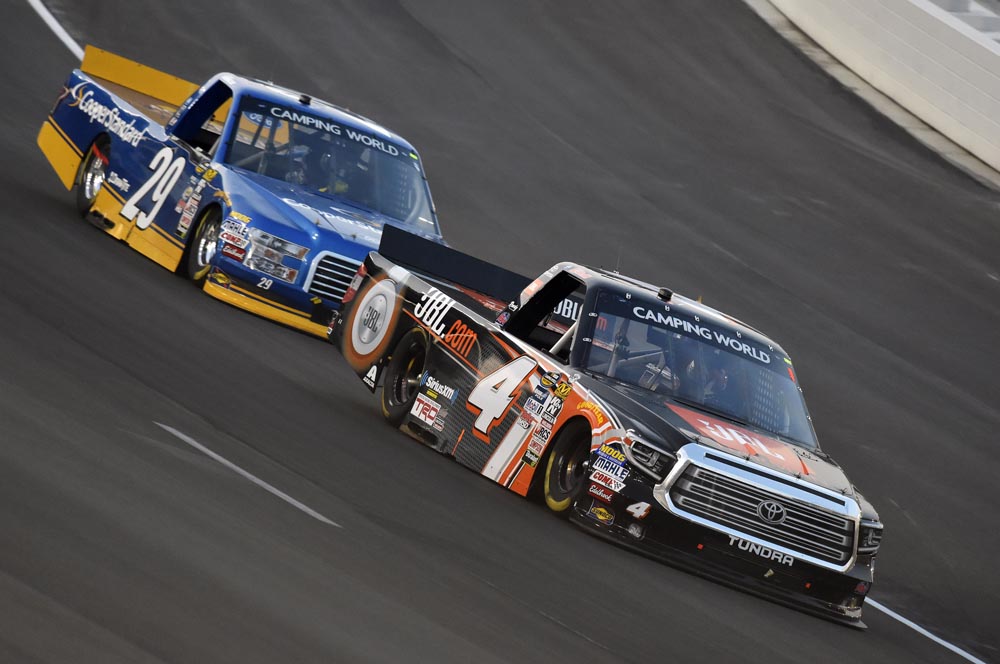 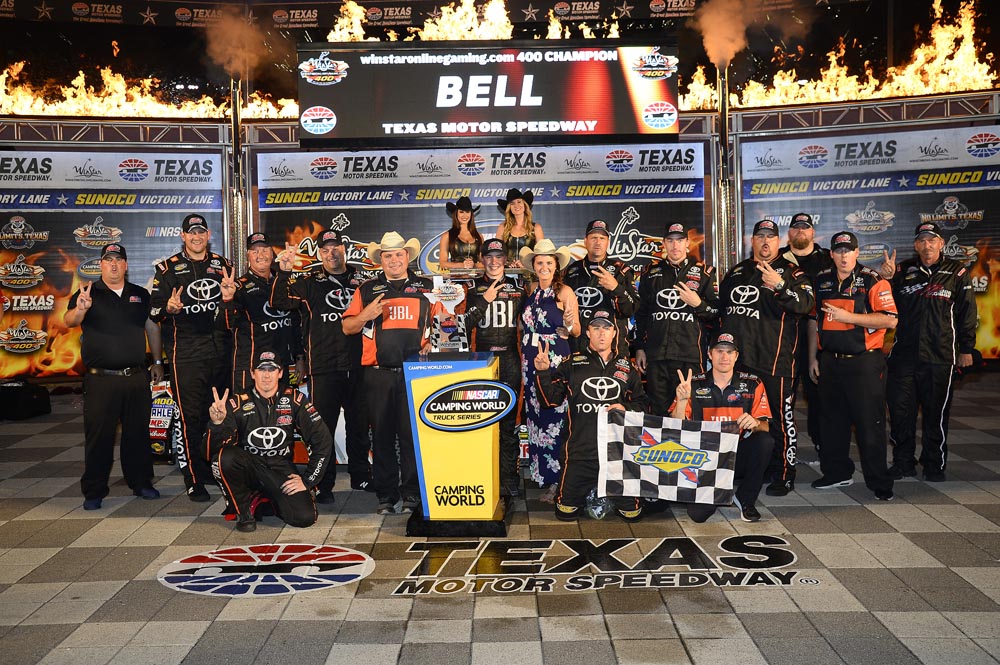 How did you win tonight’s race?

“Man, it’s just all aero. First off, I want to make sure everyone is okay. It’s kind of a sorrow victory here in victory lane. That was a pretty bad flip and I’ve taken my fair share of flips and it hurts a lot worse whenever it’s in the grass like that one was, so I hope he’s (Timothy Peters) okay. That’s the most important part. But second of all, we’re in victory lane, so it’s just a dream come true to be able to win here in Texas – my hometown , all of the Tundras are built right here in Texas – so it’s a huge win for us, everybody at Toyota and Toyota Racing Development. Man, our JBL Tundra was super, super good.”

What does this say about you and your team coming back from adversity last week?

“Well, it’s huge. We’ve been so fast throughout the entire year and all of our partners have done such a great job bringing really fast cars. Rowdy Manufacturing chassis and everyone at Joe Gibbs Racing Engines, they just work so hard to bring really fast Tundras to the race track and I’m the lucky one who gets to drive them.”

What happened during the last restart?

“I don’t know, man. It was kind of like a Talladega, Daytona-esque restart – all of them really were. You couldn’t drive away just ’cause the way the track was with the repave. It has so much grip you can draft really well, so I’m thankful to hear all the drivers are okay there. Trucks aren’t made to flip. They aren’t very comfortable when they flip either. Our JBL Tundra was really, really good. This is a really big win for everyone at Toyota – the Tundras are built right here in Texas, so it’s a hometown win, hometown win for me. Just really thankful.”

Did you think you were past Chase Briscoe when the caution came out?

“No, I had no idea. I didn’t think he (Chase Briscoe) had the lead whenever he got it and then I didn’t think I had the lead whenever I got it, so it’s just so tight, man. Me and Chase have known each other for a long time – we’re really good friends and met each other racing online whenever we were in our teens and now here we are racing in the Camping World Truck Series together.”

Why is winning at Texas Motor Speedway important for you?

“Yeah, this place has got a special place in my heart. Home’s only a couple hours up the road and, like you mentioned, we raced down here a lot with the micro sprints, so ran a lot of races down in this area, but obviously never ran at the Texas Motor Speedway and didn’t really feel like it was a possibility to race at the Texas Motor Speedway because I was just a dirt track kid from Oklahoma. There’s no pavement racing around there and so to be able to race here was a dream come true. To be able to win here is just – I don’t even have words to describe what it means to me.” 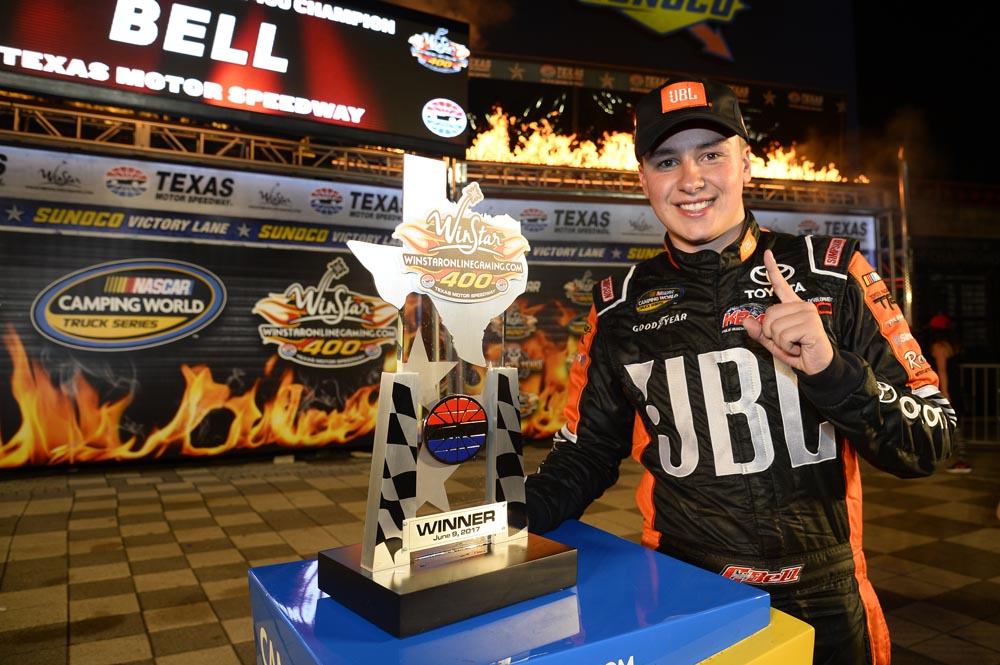 Bell will be back behind the wheel of the No. 4 JBL Tundra when the Truck Series resumes action on Saturday, June 17 at Gateway Motorsports Park in Madison, Ill. Live coverage of the Drivin’ for Linemen 200 begins with the NCWTS Setup Show at 8 p.m. ET on Fox Sports 1.