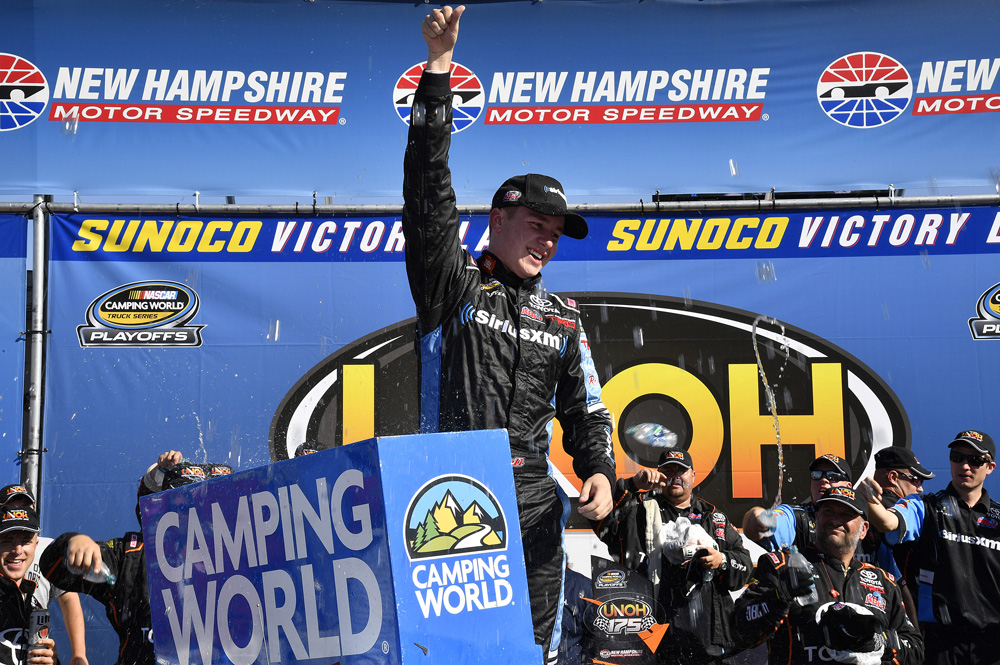 After winning the NASCAR Camping World Truck Series regular season title and earning the No. 1 seed for the playoffs, Christopher Bell and the No. 4 team picked up right where they left off to start the playoffs winning all three stages of Saturday’s UNOH 175 at New Hampshire Motor Speedway in Loudon in the first race of the Round of 8. With the win, which was Bell’s fifth of the 2017 season, the 22-year-old driver earns an automatic berth into the Round of 6 and by earning seven valuable playoff points with his sweep of the stages today will enter that round with at least 47 bonus tallies and two races remaining to earn more bonus points. 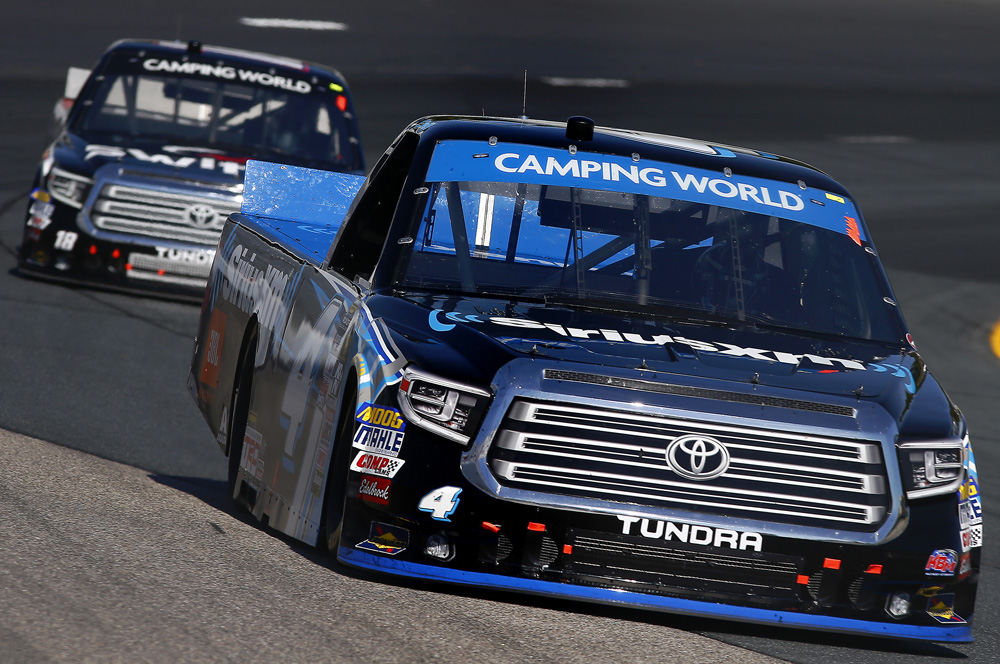 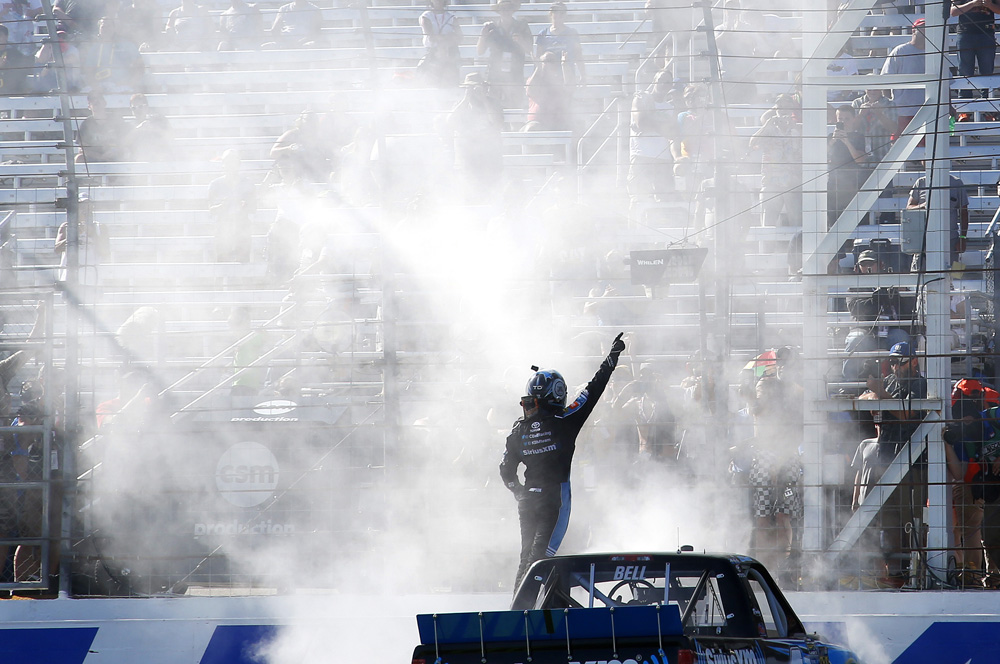 Talk about winning the first race in the Playoffs and sweeping the stage wins.

What enabled you in the end to make that pass on Ryan Truex?

“Well he was doing a really good job of watching his mirror. I knew it was tough to pass all day, but our truck had been so good we hadn’t been able to do it until we got to him. I kept trying to work down and he kept blocking my air down and down and down. Finally, I got one run where I drove up in one and two and then got a big run into three.”

How was your run today?

“This run today is just a credit to everyone at Kyle Busch Motorsports. They prepared such fast Tundras, it’s a dream come true to be able to drive this thing. I just can’t say enough man about these guys. I’m the one that gets to sit up here and take pictures with the trophy, but my team are the ones that do this. They’ve been so successful with so many different guys, it’s just a credit to them to really show how fast this truck is.”

Was it tough to pass out there today, especially when you were running second to Ryan Truex?

“Yeah, it’s just extremely tough to pass. It’s so flat that you don’t have any banking to lean against. The air is really, really – makes it difficult to get up there and pass them. I could get to his bumper and then I’d screw up and lose the nose and have to fall back five or six car lengths. He did a great job there hanging on and if he didn’t – I kept trying to peel him off the top to get me where I could have an open lane on the top and then finally I did. I could get a run in three.”

Does it take pressure off next week going to Las Vegas knowing that you’re moving on to round two?

“It’s huge to know that we can go and be aggressive at Vegas and Talladega and try and race for more wins. It’s huge for us. You know I’m just happy for all of our partners, you know. To be able to win five races in a year is incredible and really glad that we have SiriusXM on these trucks and JBL and of course Toyota and TRD and Kyle Busch Motorsports – everybody that works on these things and helps us out, this one’s for them.”

How big of a victory was this for you today?

“It was really big. To be able to win the first race and now we can be more aggressive at Vegas and especially Talladega and try and win the race compared to how I did it last year and just kind of had to take my fifth through eighth place finishes and move on. It’s just a credit to Rudy (Fugle, crew chief) and Kyle (Busch, owner) and everyone on this group – this team that I’ve got man. They’ve been the team to beat for several years now with multiple different drivers. It’s a different driver every year and the results are the same every year. It’s just a credit to Rudy and how well he can get his trucks driving. I’m the lucky guy to be in the seat.”

Kyle Busch, owner of the No. 4 SiriusXM Tundra:

How satisfying was it to see Christopher Bell take the lead and close the door?

“A good hard-fought battle with Ryan (Truex) up there. We know how good those guys have been here as of late. You know with Christopher being patient and being able to work his way past Ryan was really good obviously for our team and being able to score the victory. Getting these guys to victory lane – getting our Toyota into victory lane for everybody at KBM. It’s nice to see that Christopher and Rudy and the ability that they both have together obviously as they mentioned, it’s a really strong group and I like think that all three teams are strong teams. Just always the veteran driver is taking the lead and being able to push ourselves even harder and make our equipment even better and getting ourselves into victory lane each week. Like Christopher said it’s going to be cool to see these guys go to Vegas and not hold back and give it everything they got and then on to Talladega.”

With today’s win Bell, the No. 1 seed in the Truck Series playoffs, earned an automatic berth into the Round of 6. The driver of the No. 4 Tundra will enter the Round of 6 with at least 47 playoff points.

Bell will be behind the wheel of the No. 4 DC Solar Tundra when the Truck Series resumes action on Sept. 30 at Las Vegas (Nev.) Motor Speedway. Live coverage of the NCWTS 350 begins with the Setup Show at 7:30 p.m. ET on FS1.