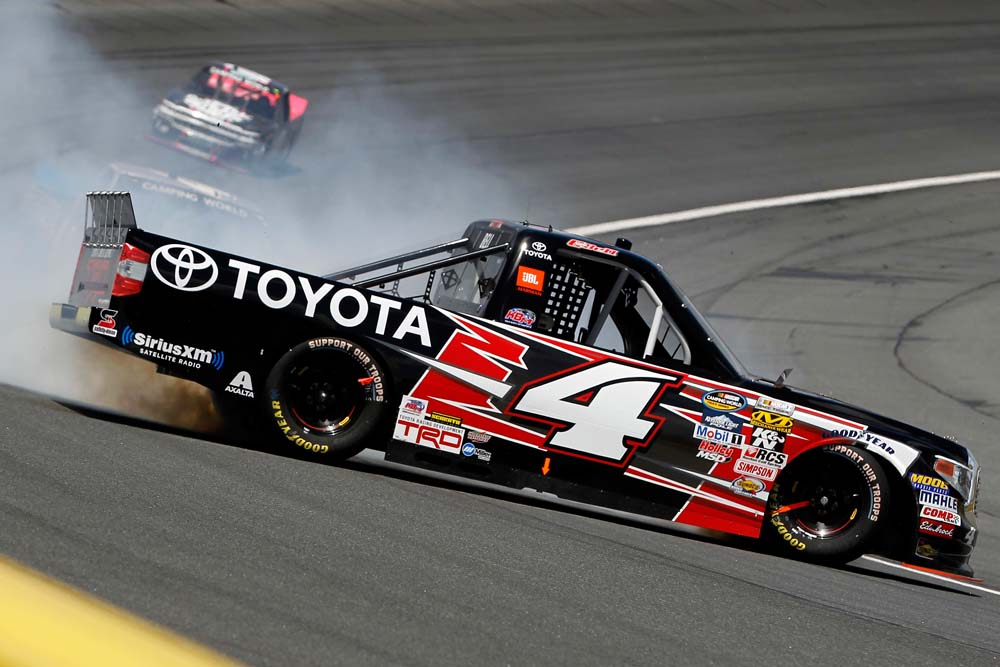 Christopher Bell overcame an eventful middle of the N.C. Education Lottery 200 NASCAR Camping World Truck Series event at Charlotte (N.C.) Motor Speedway to register his third consecutive top-10 finish of 2016 in his debut at the 1.5-mile Quad-oval. After being sent to the back of the field due to a pit-road penalty on lap 68, the talented youngster got aggressive on the ensuing restart and ended up spinning off Turn 4. Bell was able to keep his Tundra off the wall and his competitors avoided making contact with him as he slid slowly across the track, leaving him with just four flat-spotted tires.

After visiting pit road for four fresh tires, the Oklahoma native restarted from the 27th position on lap 77. He was one of the fastest trucks on the track during a long green-flag run and was able to work his way back inside the top 10 on lap 100, but was forced to surrender the eighth position with seven laps remaining to come down pit road to get enough fuel to make it to the end of the race. Bell would’ve been in a position for his third-consecutive top-five finish, but three middle-of-the field trucks were able to stretch their fuel to the end of the race and he had to settle for an eighth-place finish.

“That was a really fun race and I can’t thank Jerry (Baxter, crew chief) and all the guys on this No. 4 Toyota Racing team for giving me a fast Tundra,” Bell said. “It’s a shame to come home with an eighth-place finish with a truck that fast, but we made a few mistakes and had to work our way from the back of the pack. We passed a lot of trucks and definitely have something to build off of as we head to Texas.” 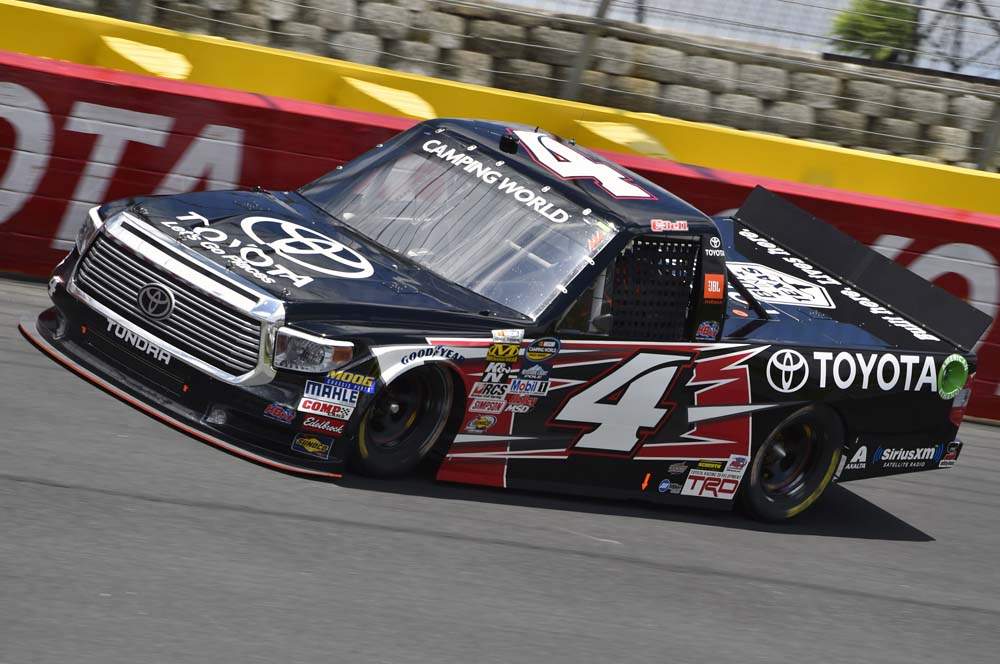 When Friday afternoon’s qualifying session was washed out, the field was set based on Thursday’s practice speeds per the NASCAR rule book. Bell took the green flag from the 15th spot, but by the time the first caution of the race occurred on lap 22 he had advanced into the top 10. Crew chief Jerry Baxter summoned his driver to pit road for a four-tire and fuel stop when pit road opened.

Bell took the lap-29 restart from the ninth position and by the time the second caution of the race occurred on lap 67 had advanced up to the seventh position. He communicated to Baxter that his Tundra was “really good,” before making his way down pit road under caution. Before he reached his pit stall, a crew member was over the wall too soon and the No. 4 team was sent to the back of the field for the ensuing restart.

After spinning on the restart and coming to pit road for fresh tires under caution, Bell had just over 50 laps to work his way back to the front of the field. The talented wheelman made the majority of his race-high 90 green-flag passes during the final run. On lap 85 he had advance up to 15th and on lap 100 he was back inside the top 10. With 20 laps remaining and the caution clock turned off, Baxter alerted his young driver that they were four laps short on fuel and to “save me what you can.”

He was unable to make it to the end of the event without having to visit pit road for a splash of fuel, but after all was said and done he was able to collect his third consecutive top-10 finish. The Sunoco Rookie of the Year contender maintained his ninth-place position in the championship standings as heads to Texas Motor Speedway for the first event this season that he has prior experience at the track.

Matt Crafton picked up his second consecutive win in 2016 and the 13th of his Truck Series career. KBM owner-driver Kyle Busch finished 5.748 seconds behind Crafton in the runner-up spot. Johnny Sauter, Tyler Reddick and Matt Tifft rounded out the top-five finishers.

William Byron led the first 15 laps of the race in the No. 9 Liberty University Tundra and came home 10th. Daniel Suarez and his No. 51 ARRIS Tundra team rolled the dice on fuel mileage late in the event, but had to surrender the lead with three laps remaining when he ran out of gas and ended up finishing 23rd.

The sixth race of the 2016 season featured three cautions for a total of 14 laps. There were 14 lead changes among nine drivers. Bell remains ninth in the Truck Series championship standings, 37 tallies behind points leader Matt Crafton.

Bell will be behind the wheel of the No. 4 JBL Tundra when the Truck Series resumes action Friday, June 10 at Texas Motor Speedway in Fort Worth. Live coverage of the Rattlesnake 400 begins with the NCWTS Setup show at 8:30 p.m. ET on Fox Sports 1.