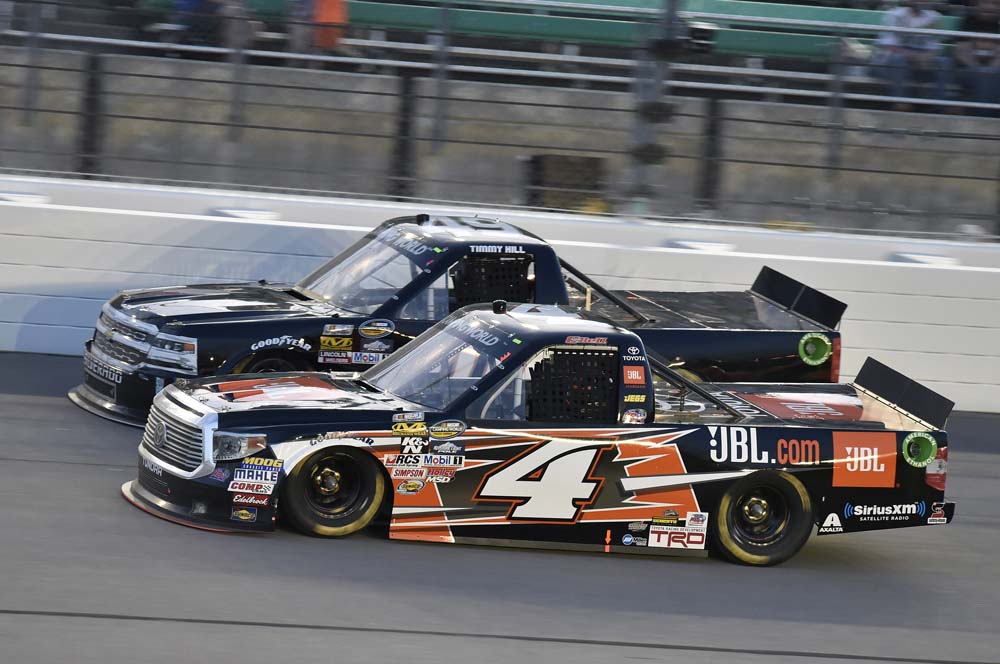 For the third time in four races this season, Christopher Bell had the No. 4 JBL Tundra in a position to compete for the win as the event reached the closing laps. Bell was running second, behind his Kyle Busch Motorsports’ (KBM) teammate William Byron, when a single-truck accident brought out the caution with three laps remaining and set up NASCAR overtime.

Byron chose the outside lane, leaving Bell on the inside lane for the final restart. Just as the front row passed the start-finish line, the drivers in the second row made things four-wide, leaving Bell stuck in the middle. The youngster fell back to the sixth position as the field took the white flag, but after the top-two trucks wrecked exiting Turn 4 on the final lap and the race ended via caution, the Oklahoma native advanced regained positions and produced a season-best fourth-place finish.

“I’m still learning these things — the aero is so important and so easy to make positions up on restarts or just killed on them,” Bell said. “I had a couple good ones and a couple bad ones tonight and it is disappointing to end up fourth after running second most of the race and taking the lead at one point, but this is the run we needed. Daytona — we were really fast and Atlanta we had the truck to beat. Martinsville we kind of struggled and ended up crashing again, so just really thankful to get out of here with a top-five and actually finish the race.

Thankful to everyone at Kyle Busch Motorsports – the whole No. 4 gang – and everyone at JBL and Toyota, man, they do such a good job giving me nice, fast race trucks and they’re fun to drive. They really are. Big congratulations to my teammate William (Byron). It’s cool to seen him running so well and I’m excited for the rest of the year.”

Bell started the race from the fifth position, where he remained when the caution clock expired and slowed the field for the second time on lap 43. After reporting that his JBL Tundra was “a little free,” the rookie visited pit road for the first time of the night. The over-the-wall crew administered a four-tire and fuel stop that included a small chassis adjustment.

The Oklahoma native took the lap-50 restart from the seventh position and then advanced back into the top five after narrowly avoiding a two-truck accident in front of him six laps later. When another caution flew on lap 59, crew chief Jerry Baxter summoned his young driver to pit road for a fuel-only stop after which the No. 4 Tundra returned to the track scored in the 14th position for the ensuing restart.

Bell was scored in the ninth spot for a restart on lap 70, and two laps later was in the fourth spot after a bold three-wide pass to the top of the track. A two-truck accident on lap 73 slowed the field for the sixth time. The top-three trucks elected to visit pit road, giving Bell the lead for the first time.

On the ensuing restart, Bell got stuck in the middle lane and subsided to the sixth position. The longest green-flag run of the night ensued from lap 82 to 122 and Bell had moved back forward into the third spot when the caution clock expired. He communicated to Baxter that his Tundra was “really good,” before visiting road for the final time of the night for four fresh tires and full tank of fuel.

The Toyota driver took the ensuing restart from the sixth position and was running fifth when a one-truck accident slowed the field for the ninth time on lap 130. Two laps into the next run, the top-three trucks made contact and Bell emerged second behind his teammate Byron. The JBL Tundra was tucked in the second position on the bumper of the Liberty University Tundra, looking for a way to make its way to the front, when it snapped loose with laps 24 laps remaining.

With 10 laps remaining, Bell found himself over three seconds behind his teammate. He fell back to third momentarily, but was able to work his way back around Daniel Hemric into the runner-up position before the one-truck accident with three laps remaining set up overtime and the dramatic finish.

The fourth race of the 2016 season featured 11 cautions for a total of 47 laps. There were 19 lead changes among nine drivers, including Bell who led twice for five laps. Bell’s season-best finish helped him jump eight positions in the Truck Series championship standings, from 22nd to 14th.

Bell will return to the No. 4 Toyota Tundra when the Truck Series resumes action May 13 at Dover (Del.) International Speedway. Live coverage of the NCWTS 200 begins with the NCWTS Setup Show at 5 p.m. ET.