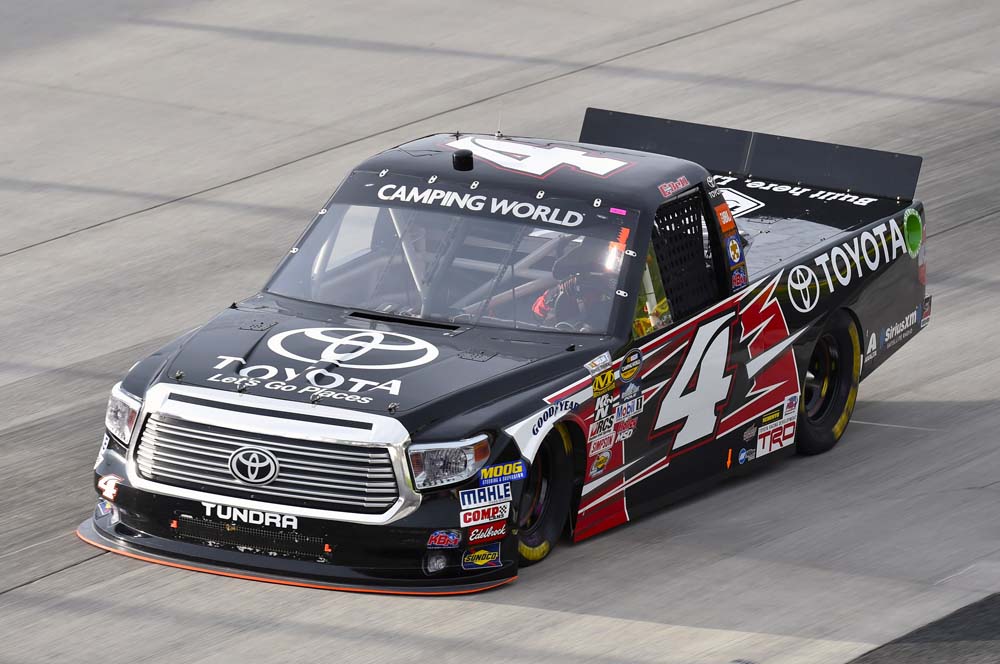 Christopher Bell came from his ninth starting position to score a season-best third-place finish in his debut at Dover (Del.) International Speedway during Friday’s NASCAR Camping World Truck Series event. Batting a loose-handling Toyota in the early stages of the JACOB Companies 200, the Sunoco Rookie of the Year contender spent the first 50 laps of the race just outside the top 10 before a plethora of adjustments by crew chief Jerry Baxter on the first pit stop of the race brought Bell’s Tundra to life. The Oklahoma native cracked the top five for the first time on lap 96 of the 200-lap event and after restarting from the fourth spot on lap 173, advanced one more position to secure a season-best finish for the second week in a row.

“Today was a really good race for our No. 4 Toyota Racing team,” Bell said. “We started off not so great, but my crew chief did a heck of a job today — he was able to get us dialed in and we were able to salvage a third-place finish out of where we were running 12th to 15th at the beginning. I’m just really fortunate to be here at Kyle Busch Motorsports (KBM) and to be a part of the Toyota, TRD (Toyota Racing Development), JBL family.”

After Friday afternoon’s qualify session was washed out, the field was set based on the combined speeds from Thursday’s two practice sessions, per the NASCAR rule book. Bell took the green flag from the ninth spot, but by the time the first caution of the race flew on lap 42 had fallen back to the 12th position, battling what he described as a Tundra that was “a six loose.”

Crew chief Jerry Baxter threw everything but the kitchen sink at the No. 4 Toyota when Bell visited pit road, making a significant trackbar adjustment and inserting two spring rubbers into the left rear of the truck during a four-tire and fuel stop. During the next run, Bell communicated that the changes were extremely positive as he began to work his way forward on a track that was extremely tough to pass on. The Sunoco Rookie of the Year contender restarted from the 14th position on lap-48, but had advanced up to sixth when the fourth caution of the day set up the second round of pit stops.

With the handling much improved, Baxter elected for a four-tire and fuel stop with no adjustments. A slow stop cost the No. 4 team several positions, leaving Bell scored in the ninth spot for the ensuing restart on lap 84. Just over 10 laps later, the talented wheelman cracked the top five for the first time of the race and would remain there for the rest of the day.

A one-truck accident slowed the field for the fourth time on lap 133. Still posting some of the fastest lap times on the track, once gain Baxter called for a four-tire and fuel stop with no adjustments. Bell restarted fifth on lap 134 and 20 laps later moved up to fourth. A debris caution on lap 168 bunched the field for the final time. The Toyota Racing driver quickly jumped up to third on the ensuing restart and slowly reeled in the top-two in the closing laps but ran out of time when the checkered flag waved.

Matt Crafton picked up his first win of 2016 and the 12th of his Truck Series career. KBM driver Daniel Suarez came home 0.571 seconds behind Crafton in the runner-up spot with Bell just behind him in third. Johnny Sauter and Cole Custer rounded out the top-five finishers. William Byron led a race-high 80 laps in KBM’s Liberty University Tundra, but finished the event in the 11th position.

The fifth race of the 2016 season featured six cautions for a total of 29 laps. There were just three lead changes among four drivers. Bell’s season-best third-place finished helped him jump five positions in the Truck Series championship standings, from 14th to ninth, and earned him the Sunoco Rookie of the Race award.

Bell will return to the No. 4 Toyota Tundra when the Truck Series resumes action May 20 at Charlotte (N.C.) Motor Speedway. Live coverage of the N.C. Education Lottery 200 begins with the NCWTS Setup Show at 8 p.m. ET.