Bell and No. 4 Team Execute A ‘Sirius’ Comeback 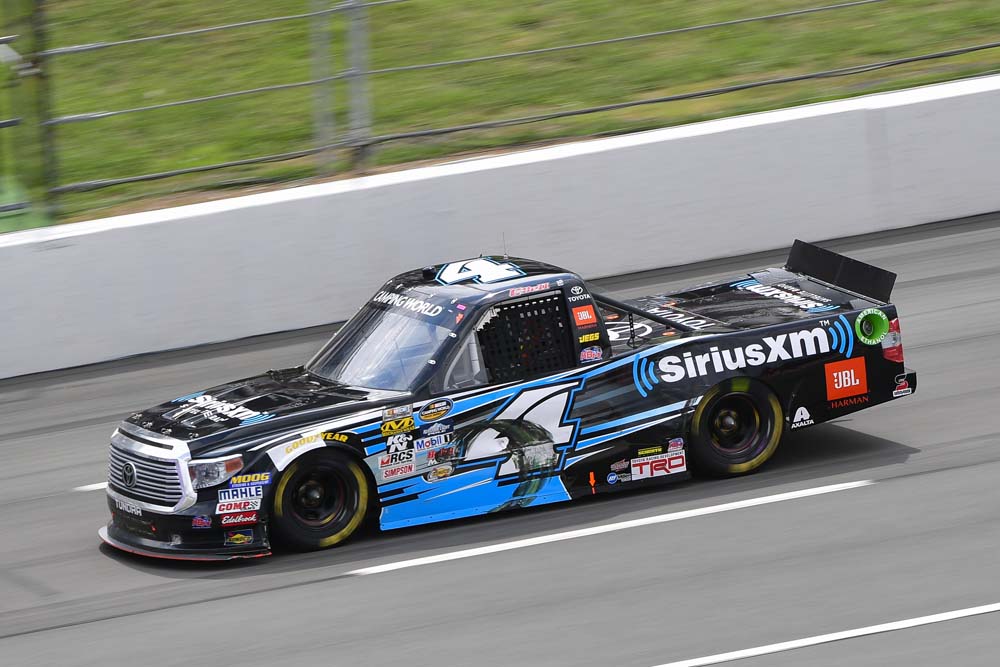 The misfortunes for Christopher Bell and the No. 4 SiriusXM started before the field even took the green flag, but when it was all said and done they were able to come from five laps down to record a 10th-place finish in the Pocono Mountains 150 at Pocono Raceway in Long Pond, Pa.

Shortly after the command to start engines, Bell noticed that the voltage level on his Tundra was below the normal reading. After resetting his switches, the levels remained low, so crew chief Jerry Baxter summoned him to pit road. The over-the-wall crew was able to diagnose the problem, but by pitting before the green flag was forced to start the 60-lap event from the back of the field. 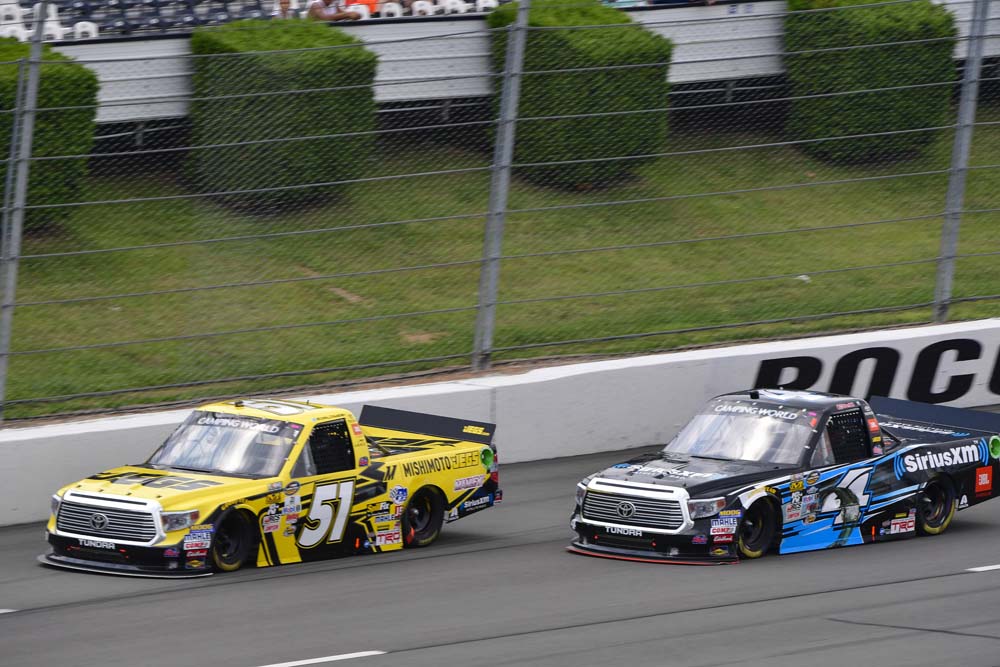 The two-time Truck Series winner was able to catch the back of the field as they took the green flag and by the time the first caution of the race occurred on lap 5 maneuvered his way up to the 16th position. Knowing that he needed to use strategy to try and regain the rest of the track position, Baxter elected to top off the truck with fuel under caution and get off sequence with the top 10 trucks.

Bell restarted from the 19th position when the field went back green on lap 10. When a single-truck spin slowed the field for the second time on lap 13, several teams elected to pit and that allowed Bell to move up from 14th to sixth for the ensuing restart.

As the field fanned out three-wide into Turn 1, the SirusXM Tundra got shuffled back several positions and lost its momentum. As John Wes Townley went to get a run underneath Bell through Turn 2, he maneuvered his truck below the apron, got loose and slid up the track into Bell. Bell ran out of room trying to avoid Townley and the two trucks caromed into the outside wall.

Under caution Bell brought his battered Tundra to the attention of his crew, who tried to quickly fix the truck and return their driver to the field without losing a lap. The first fix wasn’t able to keep the fender from rubbing the tires and the left rear tire went down. Baxter summoned his driver to pit road once again, where the team made a more-lengthy repair during green-flag conditions. Once the repairs were complete, the No. 4 Tundra returned to the track scored five laps down in the 25th position.

Thanks in part to a record nine cautions and having the longest green-flag run consist of six laps, the majority of the field remained on the lead lap and Bell was the lone driver a lap down. With each ensuing caution, the No. 4 Tundra would get the “wave around” and when it was all said and done he was the recipient of a series-record five free passes. The final one coming with six laps remaining and putting him back on the lead lap.

Baxter called his driver to pit road, where the over-the-wall crew put on a set of scuffed tires. Bell was scored in the 23rd position when the field went back green with four laps remaining and was able to pass 13 competitors by the time the checkered flag flew to remarkably record his fifth consecutive top-10 finish.

“It’s a shame, it really is because Jerry Baxter (crew chief) and all the No. 4 guys did a great job on the truck,” said Bell of his early accident. “Our SiriusXM Tundra was super good all weekend long and I definitely feel like we had a truck that could’ve competed for the win if not get the win. But, I put myself in a bad position there once we finally made our ground back up from the beginning of the race. I put myself in a bad spot on a restart and got put three-wide going into the tunnel turn and it didn’t work out.

Thankfully my guys never gave up and were able to get my SiriusXM Tundra back to being drivable. I was just out there trying to log laps and the next thing you know, there was a yellow. Then there was another yellow, and they said, ‘You’re the lucky dog, come on around.’ The last yellow put us on the lead lap, and we were able to capitalize on it.” 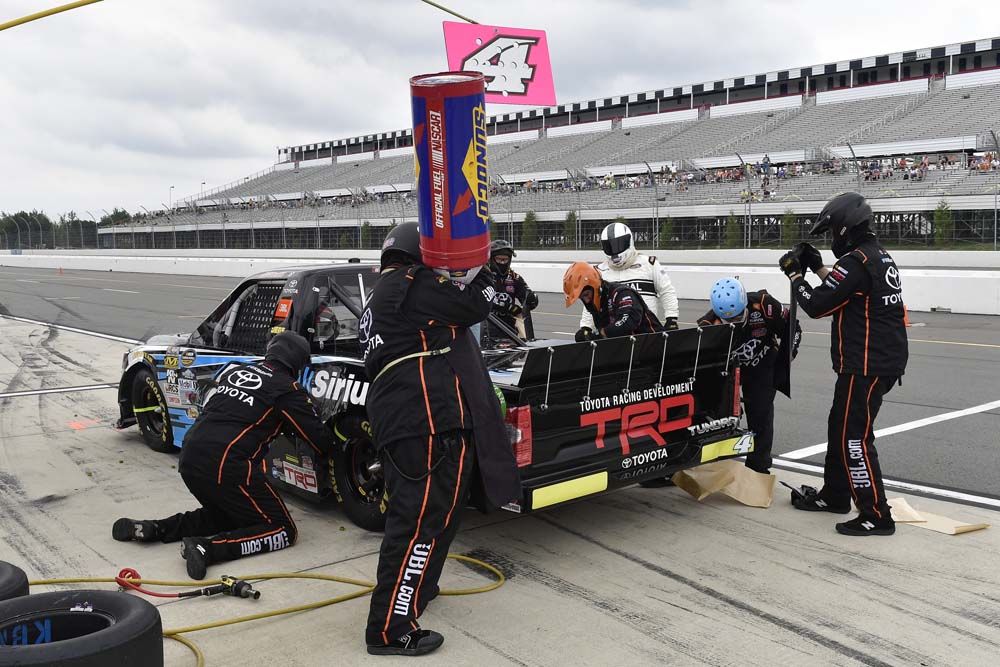 Bell’s KBM teammate William Byron picked up his fifth win of 2016 – a Truck Series record for a rookie. Cameron Hayley finished 1.406 seconds behind Byron in the runner-up position. Brett Moffitt, Timothy Peters and Cole Custer rounded out the top-five finishers.

Bell’s other teammate, Cody Coughlin, finished 13th in his No. 51 JEGS/Mishimoto Tundra.

The 12th race of the 2016 season featured nine cautions for a total of 27 laps. There were five lead changes among three drivers. Bell maintained the sixth position in the Truck Series championship standings and with one win would currently be seeded fourth in the inaugural elimination-based playoff format in the Truck Series.

Bell will be back behind the wheel of the No. 4 Tundra when the Truck Series resumes action Wednesday, Aug. 17 at Bristol (Tenn.) Motor Speedway. Live coverage of the UNOH 200 begins with the NCWTS Setup show at 8 p.m. ET on Fox Sports 1.