Bell Narrowly Misses Doubling Down in the Round of 8 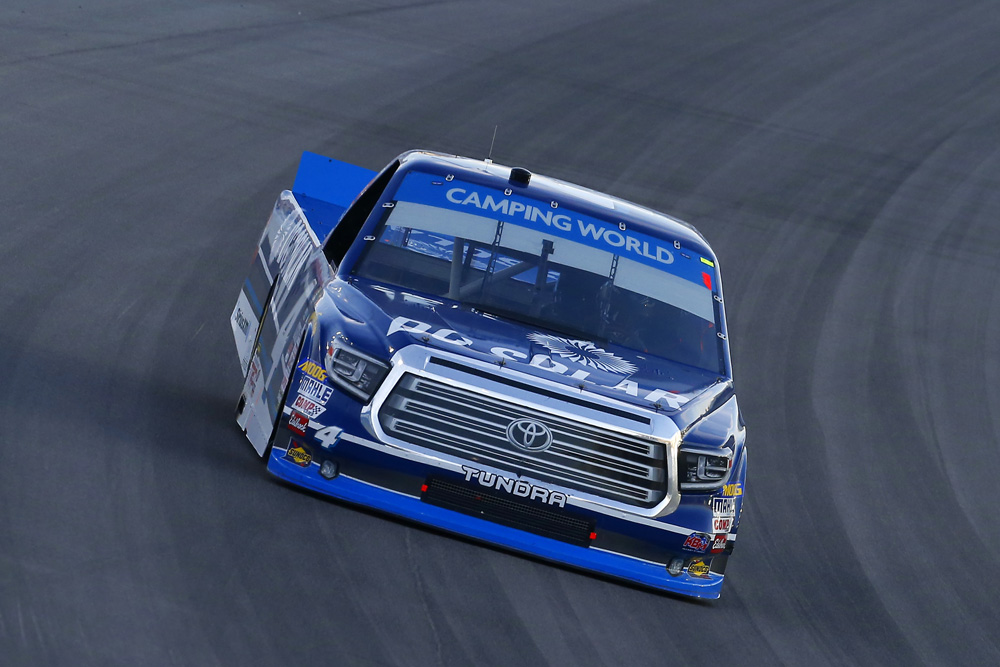 Christopher Bell opened up the 2017 NASCAR Camping World Truck Series Playoffs with a victory at New Hampshire Motor Speedway in Loudon last week and appeared to be on his way to adding another victory Saturday night at Las Vegas (Nev.) Motor Speedway until a late-race caution set up a seven-lap shootout to the finish.

Bell chose the outside lane for the restart and was put three-wide as the field went through Turns 1 and 2. He ended up getting shuffled back to fourth spot with five laps remaining, but as the racing intensified and two of the trucks in front of him traded paint and slowed their momentum, Bell moved up the runner-up position. The DC Solar Tundra tucked in the tracks of Ben Rhodes Tundra with four laps remaining waiting for an opportunity to make a pass for the lead. Rhodes ran right along the white line on the inside of the track with Bell a truck length higher but tucked on his bumper for the final three laps.

On the final lap, Rhodes slipped up the track coming off Turn 4 and Bell was able to maneuver to the inside of him as they raced down the frontstretch to take the checkered flag. Rhodes moved down to block Bell’s momentum, nearly putting him into the infield grass, and was able to cross the stripe .066 seconds ahead of him when they crossed the start-finish line. 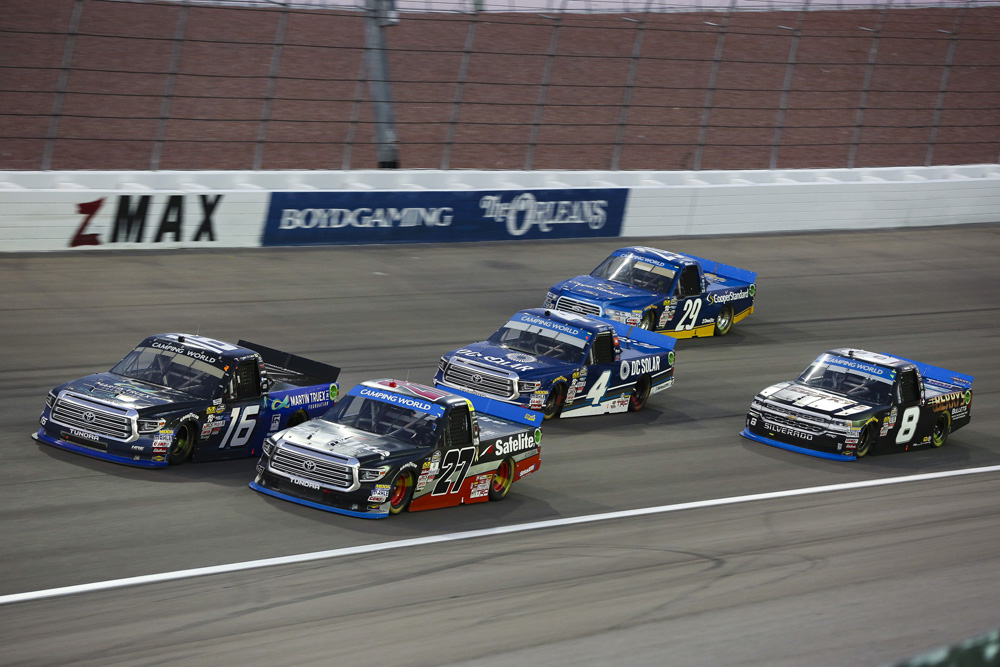 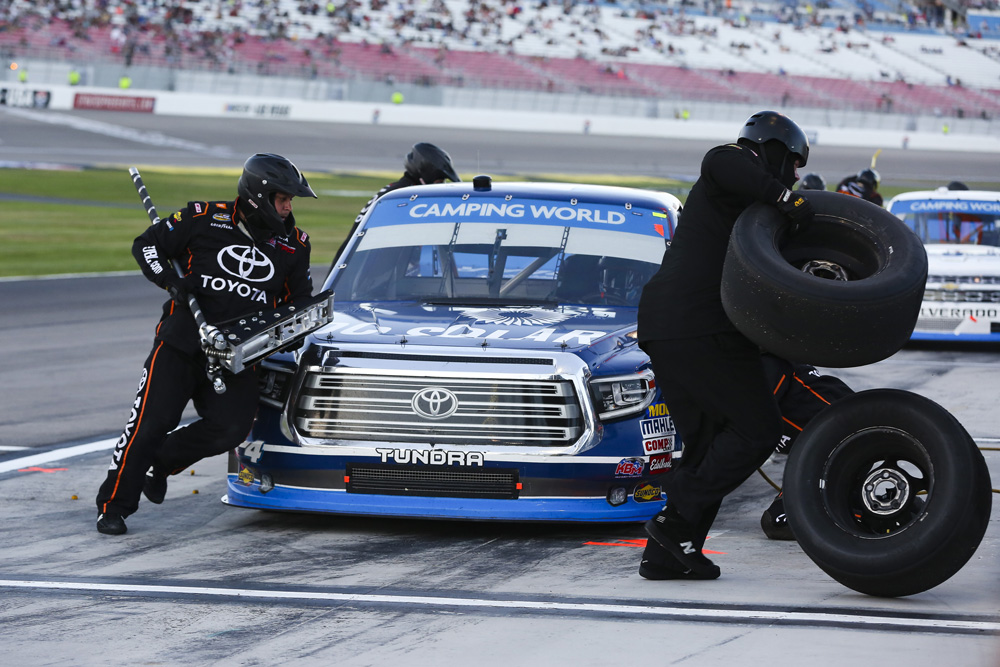 CHRISTOPHER BELL, driver of the No. 4 DC Solar Tundra for Kyle Busch Motorsports:

How strong was your Tundra in the race?

“Our DC Solar Tundra was excellent. These trucks are so aero sensitive, it’s a lot of who does the best job of restarting and who has the best push. I just didn’t get it done on the final restart and it was frustrating. I’m happy for Ben (Rhodes), that was a cool win for him. He’s been long overdue for a win, and that was cool to race him that hard. I’m just upset for myself and bummed for my team, they did an excellent job. They did their part, brought a really fast Tundra that was capable of winning.” 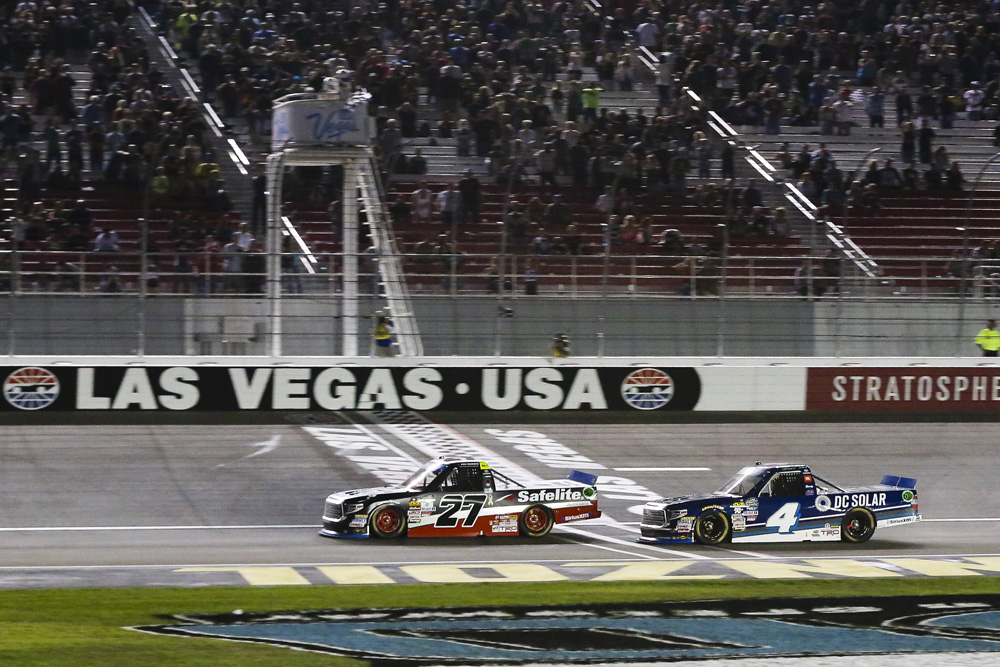 With his win last week at New Hampshire, Bell earned an automatic berth into the Round of 6 that begins Oct. 28 at Martinsville (Va.) Speedway. The driver of the No. 4 Tundra will enter the Round of 6 with at least 47 playoff points.

Bell will be behind the wheel of the No. 4 Toyota Tundra when the Truck Series resumes action on Oct. 14 at Talladega (Ala.) Superspeedway. Live coverage of the Fred’s 250 begins with the Setup Show at 12:30 p.m. ET on FOX.