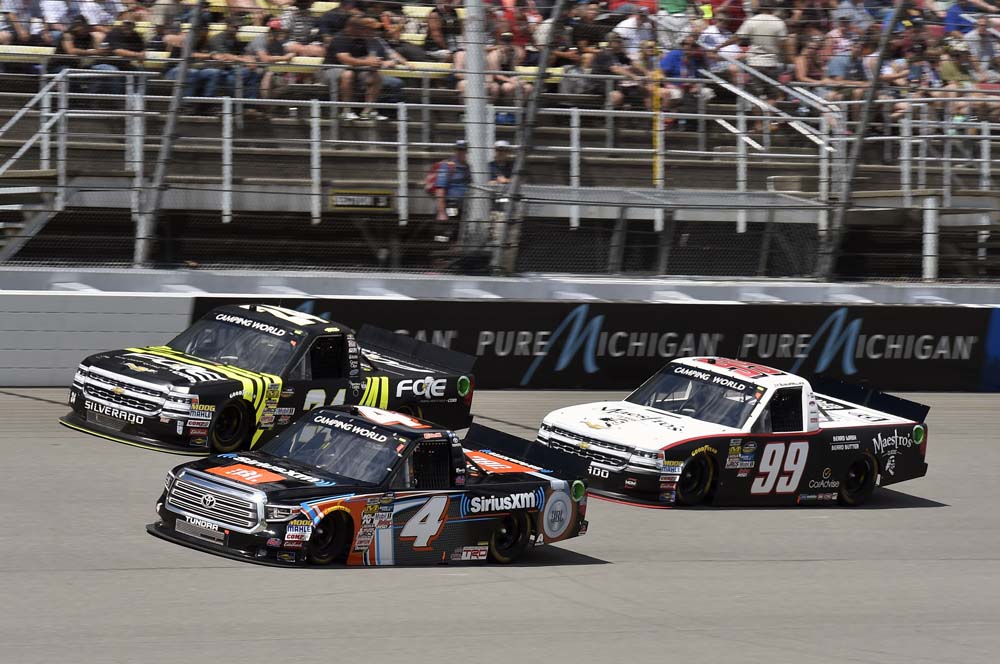 Christopher Bell worked his way from his 13th starting position in Saturday’s LTi Printing 200 at Michigan International Speedway in Brooklyn to run inside the top five in the final two stages and contend for a win in the closing laps.

After riding in the second position behind Austin Cindric for several laps, the Oklahoma native decided it was time to make his move with 11 laps to go. He dove to the inside and momentarily took the lead, but as Bell and Cindric were trading paint down the backstretch, Darrell Wallace Jr. dove to the inside of both of them into Turn 3 and ended up clearing them both for the lead.

Wallace Jr., a former Kyle Busch Motorsports (KBM) driver, would hold on for the final 10 laps to pick up his first Truck Series win since picking a victory for KBM in the 2014 Truck Series finale at Homestead (Fla.) Miami Speedway.

With his runner-up finish and Johnny Sauter finishing 18th, Bell was able to extend his lead in the regular season standings to 37 points over the reigning champion with three races remaining before the start of the Truck Series playoffs. 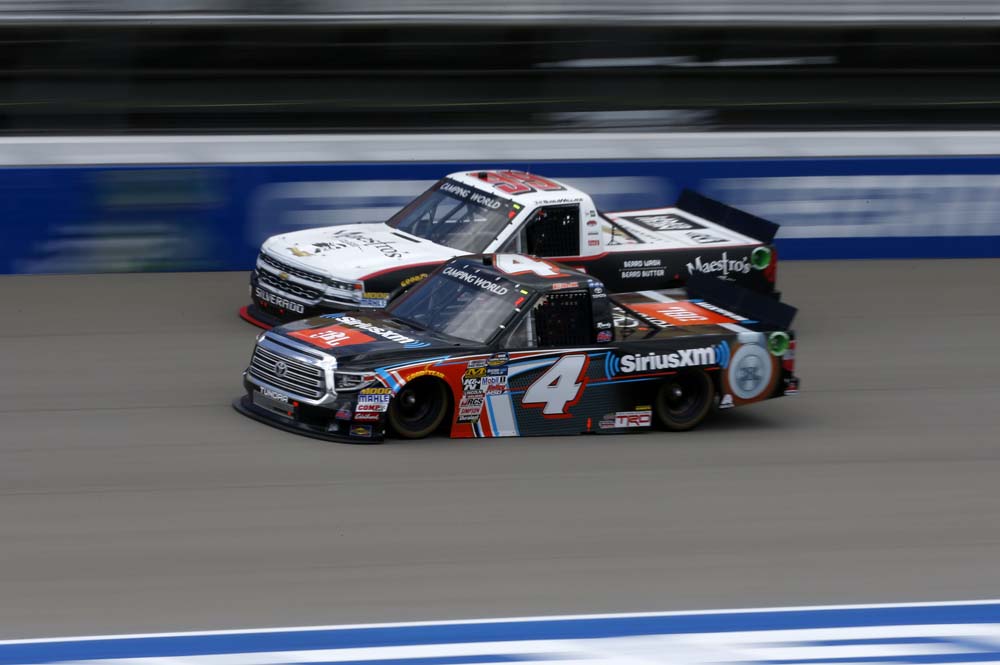 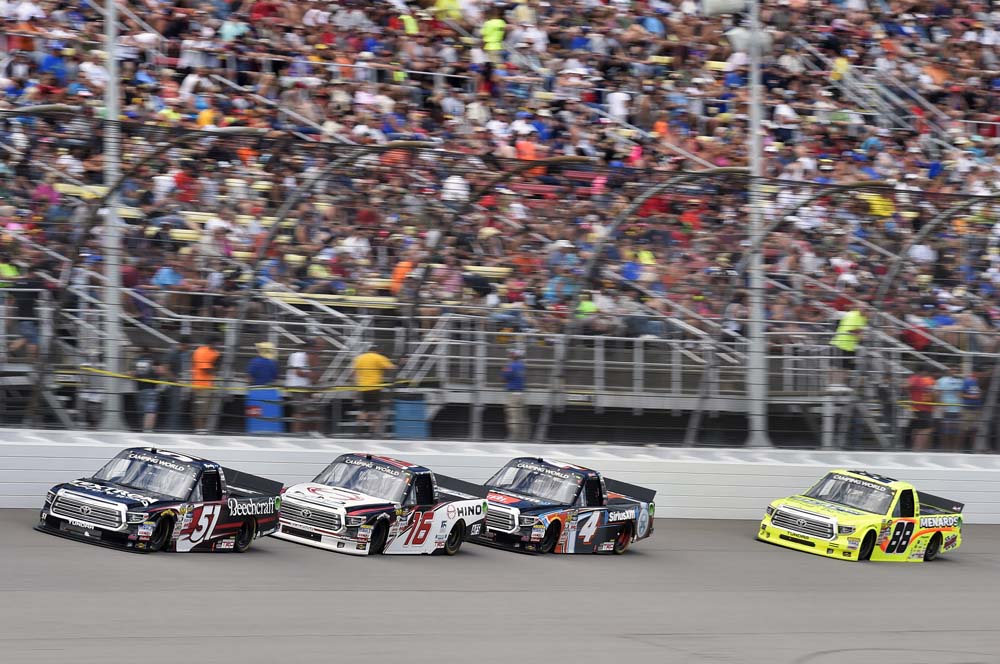 CHRISTOPHER BELL, driver of the No. 4 JBL/SiriusXM Tundra for Kyle Busch Motorsports:

How was the finish to the race?

“I don’t know, I hope the fans enjoyed that one because it was a ton of fun. Our SiriusXM/JBL Tundra was handling really good, we just didn’t seem to have the raw speed to get up there and get by them. That was a lot of fun. I wish I would have been able to work that inside pass like I did the time before. I didn’t quite get there. That’s awesome for Bubba (Darrell Wallace Jr.), to see him come back and win like that – that was a really fun race.”

How difficult was it to pass in the race?

“It was really tough because the draft was huge. It didn’t seem like me or Kyle (Busch) could really do anything without someone pushing behind us. I don’t know, when I took the lead there off of two I felt like I was in pretty good shape. Instead of Bubba (Darrell Wallace Jr.) helping me he took the lead himself. It’s really cool to see him come away and win like that, it was a really fun race just bummed and frustrated that we didn’t get it done.”

What makes it so hard to pass on the low side of the track?

“There’s more banking up the grooves so if you go to the bottom and no one goes with you then you just get trapped down there because the line is so fast when you have all the trucks lined up like that.” 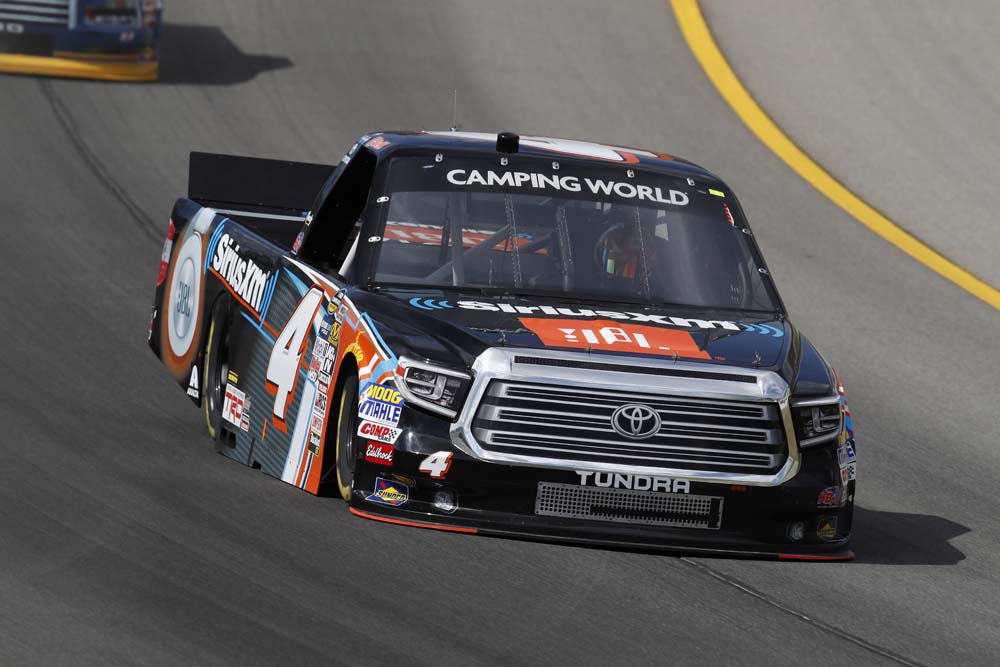 Bell leaves the 13th race of the season leading the Truck Series championship standings by 37 points over reigning champion Jonny Sauter. The Oklahoma native has earned 24 playoff points this season.

Bell will be behind the wheel of the No. 4 Toyota Tundra when the Truck Series resumes action on Wednesday, Aug. 16 at Bristol (Tenn.) Motor Speedway. Live coverage of the UNOH 200 begins with the NCWTS Setup Show at 8 p.m. ET on FS1.