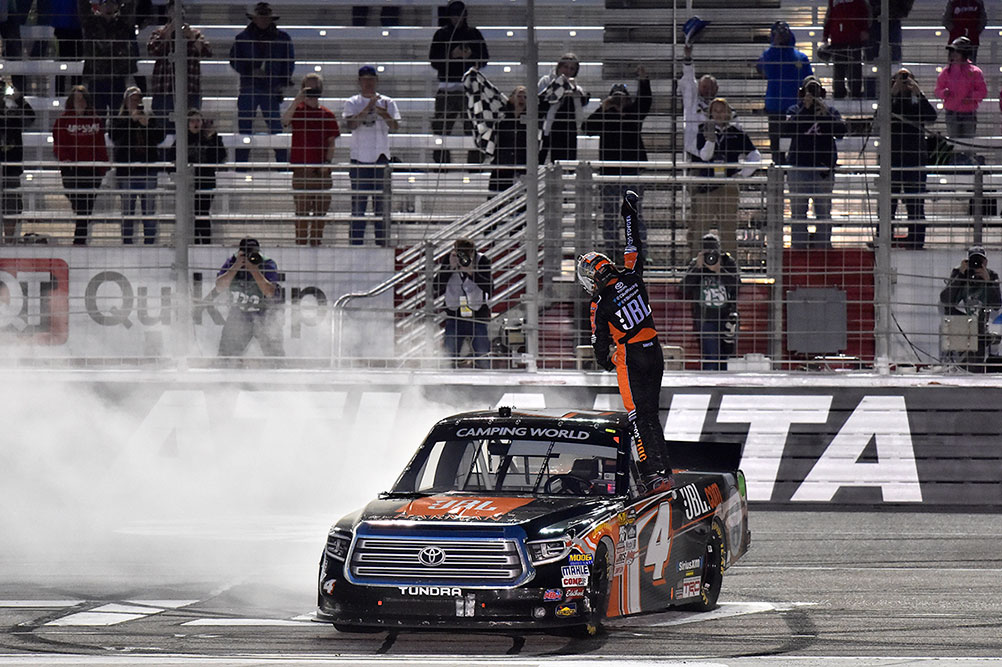 Christopher Bell started off Saturday by capturing his first-career NASCAR Camping World Truck Series pole award and ended it by dominating the Active Pest Control 200 at Atlanta Motor Speedway in Hampton, Ga. Bell led the first 83 laps en route to winning each of the first two segments and 16 of the final 17 laps en route to his first victory of 2017 and the third of his career. With the dominant victory, Bell took over the lead in the Truck Series championship standings with two races complete.

Bell’s victory was the first for Kyle Busch Motorsports (KBM) at Atlanta. The organization, which originated in 2010, has now registered at least one victory at all 21 of the tracks on the current Camping World Truck Series schedule. 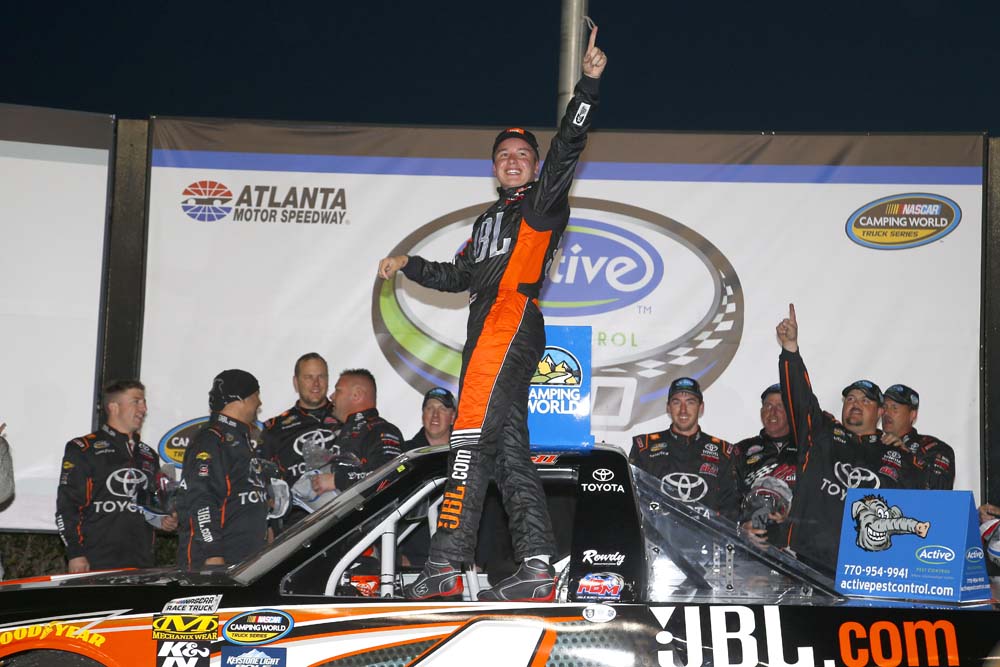 What were you thinking during the final restart?

“I was just trying to do everything I could to make sure I got a good restart and I didn’t get my momentum broke. These Truck races are really tough to get restarts going because it’s so, so aero dependent and you can get all sorts of momentum or you can get all sorts of momentum taken away from you and I think that happened to me there in the middle section of the race, but Rudy (Fugle, crew chief) and the guys just – they did an awesome job preparing this thing. It was really fast all weekend. Man, it was just a dream machine. It was really, really good.”

Congratulations and how does it feel to win at Atlanta?

“Yeah, thank you. Man, it’s been a dream come true to be able to be at Kyle Busch Motorsports and in this No. 4 JBL Toyota Tundra. All the guys at TRD, Rowdy Manufacturing and everyone at Kyle Busch Motorsports and all the guys at the shop work really hard on this thing, so I’m just really thankful to be able to be the one that drives this thing because it’s a dream machine.”

How did you recover when you fell back?

“Well, I knew we were really, really good and air is so important here, so whenever we took off by ourselves, I kept keying up and just saying, ‘Man, I’m really good. I don’t need anything,’ and then as soon as I fell back there, it kind of brought out some flaws on my truck, but I knew I was really good and if I could get back out front, I’d be just fine.”

“It was heartbreaking whenever the yellow came out with five to go or whatever it was, but, man, this thing had been so good, I knew all I had to do was get a good restart and then not screw it up, but I’m just really happy I could finally get JBL to victory lane. It’s been a year now since we’ve had them on the truck and we haven’t been able to win for them, so I’m glad we got them here in victory lane.”

How does this win feel given last year’s Atlanta finish?

“Well, this was definitely a race I had circled ever since we left here last February, but to be able to be see good here last year and then to come back and be as dominant as what we were was really cool for me and it was just kind of a dream weekend ever since we unloaded. We were really, really fast right off the truck and everything we did to it just made it better and better and better throughout practice. As soon as they dropped the green in the race, it was just really, really good and then kind of got shuffled there on the restart and got stalled out back there in fifth or sixth, but whenever we were able to restart back on the bottom, we were able to get right back up there.”

Noah Gragson, driver of the No. 18 Toyota, finished 14th

Kyle Busch, driver of the No. 51 Toyota, finished 26th

Bell leaves the second race of the season leading the Truck Series Championship Standings, 7 tallies ahead of Johnny Sauter. He earned 10 points each for wins in the first two stages and 40 points for winning the race. The Oklahoma native also tallied seven playoff points in the race.

Bell will be back behind the wheel of the No. 4 JBL Tundra when the Truck Series resumes action April 1 at Martinsville (Va.) Speedway. Live coverage of the Alpha Energy Solutions 200 on Fox begins with the NCWTS Setup Show at 2:30 p.m. ET.