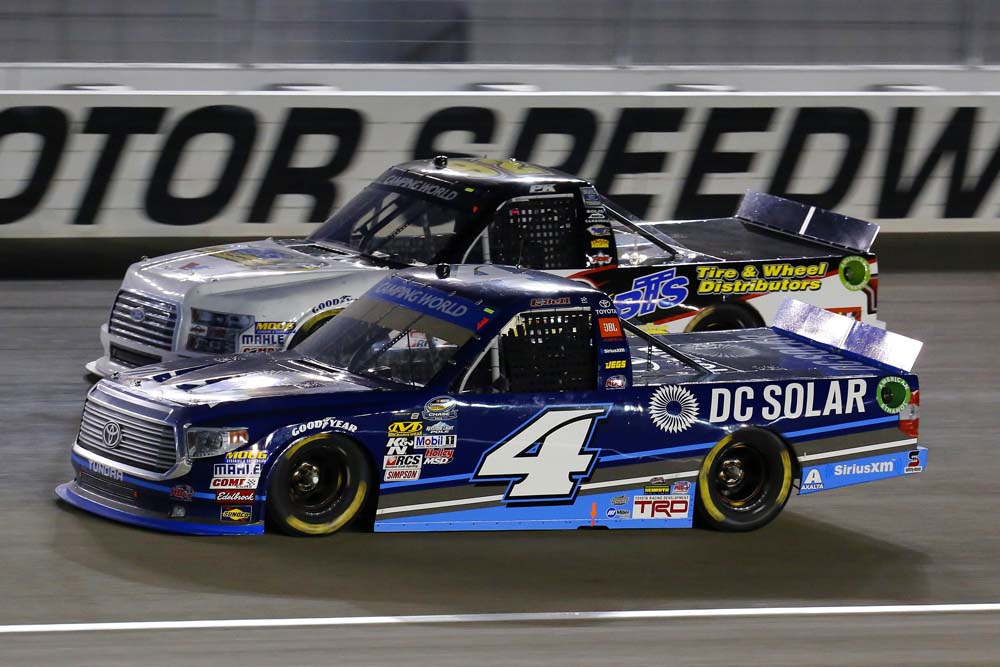 No. 4 Team Moves Up to Second in the Championship Standings

Christopher Bell and the DC Solar Racing team overcame losing third gear in the early stages of the DC Solar 300 at Las Vegas (Nev.) Motor Speedway to earn a sixth-place finish and emerge from the second race of the Round of 8 of the NASCAR Camping World Truck Series Chase second in the championship standings with one race remaining before two drivers are eliminated.

“I felt like we had a really good DC Solar Tundra — just had issues and lost third gear on the second restart,” Bell said. “Thankfully the race went green most of the time and we didn’t have too many restarts to deal with. That’s what cost us to having a shot to win tonight. The big picture is it’s probably a pretty good day for us and we’ll take it and go onto Talladega.”

Bell started from the 18th position, but had maneuvered his way into the 10th spot when the first caution of the race occurred on lap 38. After quick work by the over-the-wall crew, the No. 4 Tundra emerged off pit road sixth. On the ensuing restart the Oklahoma native catapulted backwards, falling back to the 19th position before communicating to his crew that he had lost third gear. 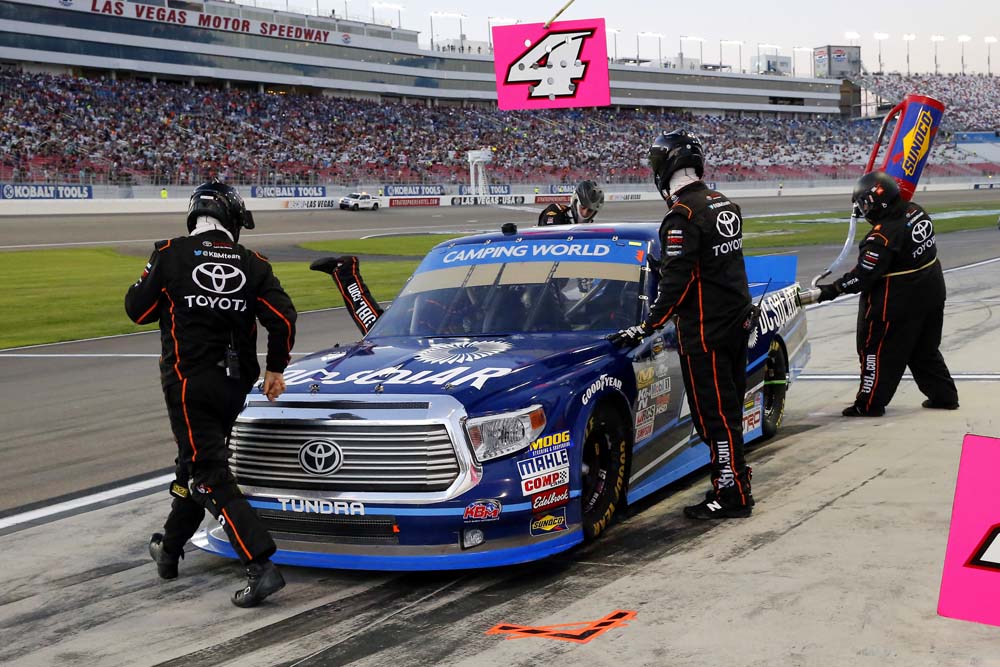 Once he got up to speed, the Rookie of the Year Contender began posting fast lap times and regaining some of the positions he lost on the restart. He was able to work his way back up to the 13th spot when the caution clock expired on lap 94 and set up the final round of pit stops. Once again the DC Solar over-the-wall crew delivered a fast four-tire and fuel stop which allowed their driver to return to the rack in the sixth position for what turned out to be the final restart of the race.

The No. 4 Tundra once again wasn’t able to get up to speed as fast as the other trucks because of not having third gear, but this time around he only had fallen to 14th when the field came back around to the stripe. As the 146-lap event proceeded caution free the rest of the way, Bell was able to work his way back into the top 10 on lap 101 and crossed the finish line in the sixth position. The top 10-finish was the No. 4 team’s 10th over the last 11 races.

Cody Coughlin finished 17th in his No. 51 JEGS Tundra.

The second race of the Truck Series Chase featured three cautions for a total of 14 laps. There were 12 lead changes among five drivers.

Bell improved one position in the championship standings and currently ranks second heading into the final race of the Round of 8 of the inaugural Truck Series Chase. As it stands, the top five in points will advance to the round of 6 following the final event of the Round of 8 at Talladega (Ala.) Superspeedway, with Byron earning an automatic bid via his win at New Hampshire Motor Speedway in Loudon.

Bell will be back behind the wheel of the No. 4 SiriusXM Tundra when the Truck Series resumes action Saturday, Oct. 22 at Talladega Superspeedway. Live coverage of the Fred’s 250 begins with the NCWTS Setup show at 12:30 p.m. ET on Fox Sports 1.