Bell Comes Up Just Short in Bid for Eldora Repeat 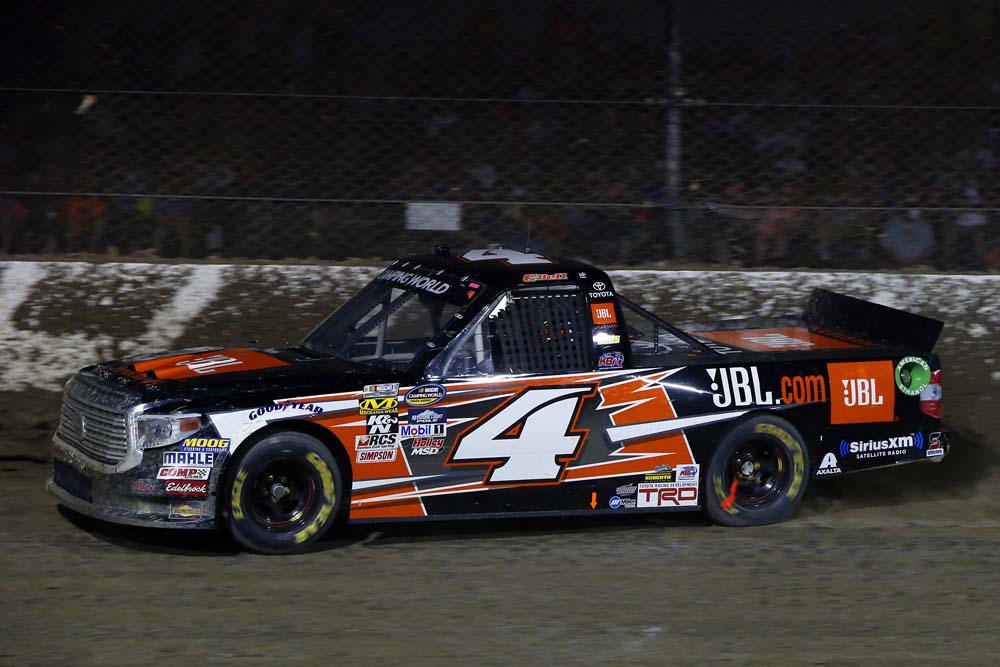 Defending winner Christopher Bell gave it all he had in the Aspen Dental Eldora Dirty Derby on Wednesday night at famed Eldora Speedway in Rossburg, Ohio, but in the end came up one position short of collecting back-to-back wins. Bell thrilled the crowd as he beat, banged and slid his way from his 10th starting position up to the second position just before the halfway mark of the 150-lap event at the half-mile dirt oval, but the damage sustained to the right rear of his No. 4 JBL Tundra as he maneuvered forward might have been too much and he was unable to chase down race winner Kyle Larson in the closing laps.

“I’m disappointed that we weren’t able to repeat, but overall it was a good points day as we work on trying to secure our spot in the chase,” Bell said. “Getting another win on dirt would’ve been fun, but our real job is to continue to get wins on pavement and compete for a championship. Thankful to everyone at JBL, Toyota and TRD for the opportunity to come out here and have some fun at my favorite track in the world. Tony (Stewart) did an awesome job with the track tonight and it was definitely the best it’s been in the history of this race. Also have to thank everyone at KBM, especially my guys on this No. 4 team — they had to work their butts off the last couple days and deserved a good finish.” 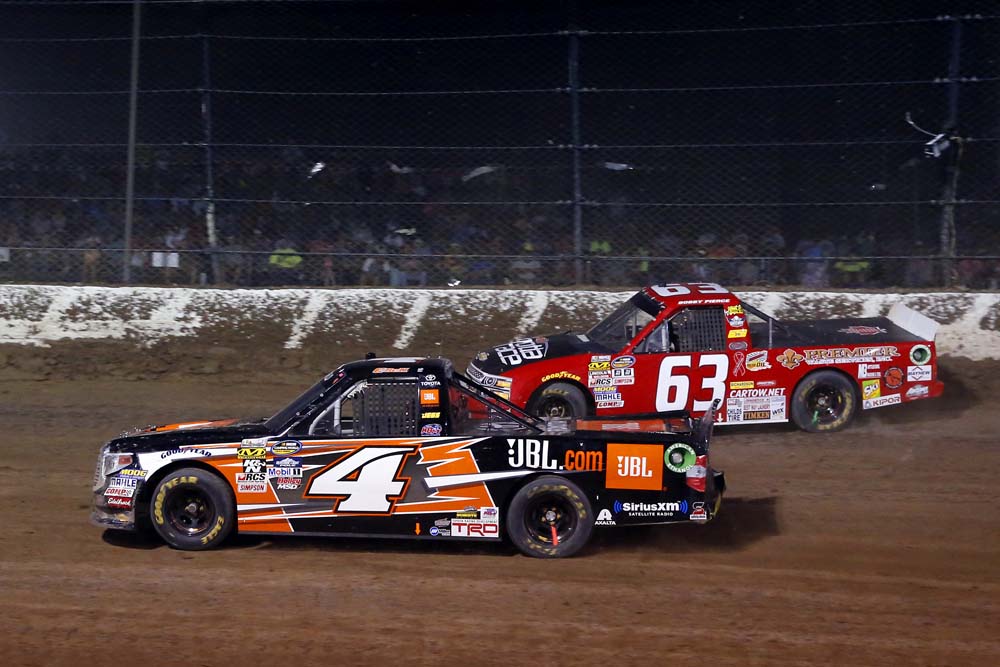 After pacing final practice on Tuesday evening, Bell turned the 10th fastest time in Wednesday evening’s two-lap, single-round qualifying session. His lap earned him the second position in the fifth and final qualifying race, which set the field for the race. After falling back to third at the start of the 10-lap dash, the Oklahoma native made a late pass to get back to the runner-up spot and earn the 10th starting position for the main event.

In the early stages of the race, Bell communicated to crew chief Jerry Baxter that he was “stuck in traffic, but not bad,” and was running eighth when debris on the track slowed the field for the first time on lap 21. The former USAC National Midget champion executed several slide jobs and worked his way up to the sixth position when debris once again slowed the field and end the first 40-lap segment.

Baxter summoned his rookie driver to pit road where the crew put on four fresh tires, filled the JBL Tundra with fuel and cleaned off the grill in an effort to try and decrease high temperatures that Bell was reporting. With one truck electing not to pit during the first break, the No. 4 Tundra started the second segment from the seventh spot.

Bell was running third when Larson had a tire go down while leading on lap 50 and spun to bring out the fourth caution of the event. He continued to run second as debris troubles continued and the caution flew again on lap 61. On the ensuing restart, the 21-year-old driver found tough going on the bottom lane and fell back fifth position, but thanks in part to two more slide jobs he was back in the runner-up position when his KBM teammates spun and collided on lap 73 and brought out the caution.

The JBL Tundra remained in the second position when the second segment ended on lap 91. With tire wear not a concern and enough fuel in the tank to make it to the end of the race, Baxter elected to keep his young driver on the track to maintain track position for the final 60-lap segment.

Bell tried to make a slide job on leader Bobby Pierce shortly after the lap-94 restart, but the JBL Tundra didn’t stick and the right rear walloped the outside wall. As he settled back into the groove the damage caused his Toyota to become increasingly tight and he hit the wall again off Turn 4 and allowed Larson to make his way underneath him.

Oil on the track slowed the field for the eighth time on lap 110 with Bell scored in the third position. He was able to hold the third position on the ensuing restart and shortly after Pierce had a tire problem and spun to bring out the ninth and final caution. The JBL Tundra lined up next to Larson, who had worked his way back to the lead, for the final restart with 16 laps remaining on lap 134.

As they worked the way off Turn 4 and down the frontstretch, Bell got into the rear end of Larson’s truck at the start-finish line and then tried to slide under him into Turn 1. He was unable to execute the pass and Larson slowly opened up to over a one-second lead with five laps remaining. Bell refused to give up and banged off the walls in both sets of corners and was able to close within three tuck lengths of Larson as he took the checkered flag.

Larson’s win was his first Truck Series win of 2016 and the second of his career. Bell finished 0.767 seconds behind Larson in the runner-up spot. Rico Abreu, Jake Griffin and Tyler Reddick rounded out the top-five finishers.

The 11th race of the 2016 season featured nine cautions for a total of 52 laps. There were three lead changes among two drivers. Bell moved up two positions to sixth in the Truck Series championship standings and with one win would currently be seeded fourth in the inaugural elimination-based playoff format in the Truck Series. The Sunoco Rookie of the Year candidate has improved seven positions in the standings over the last four events.

Bell will be back behind the wheel of the No. 4 SiriusXM Tundra when the Truck Series resumes action Saturday, July 30 at Pocono (Pa.) Raceway. Live coverage of the Pocono Mountains 150 begins with the NCWTS Setup show at 12:30 p.m. ET on Fox Sports 1.