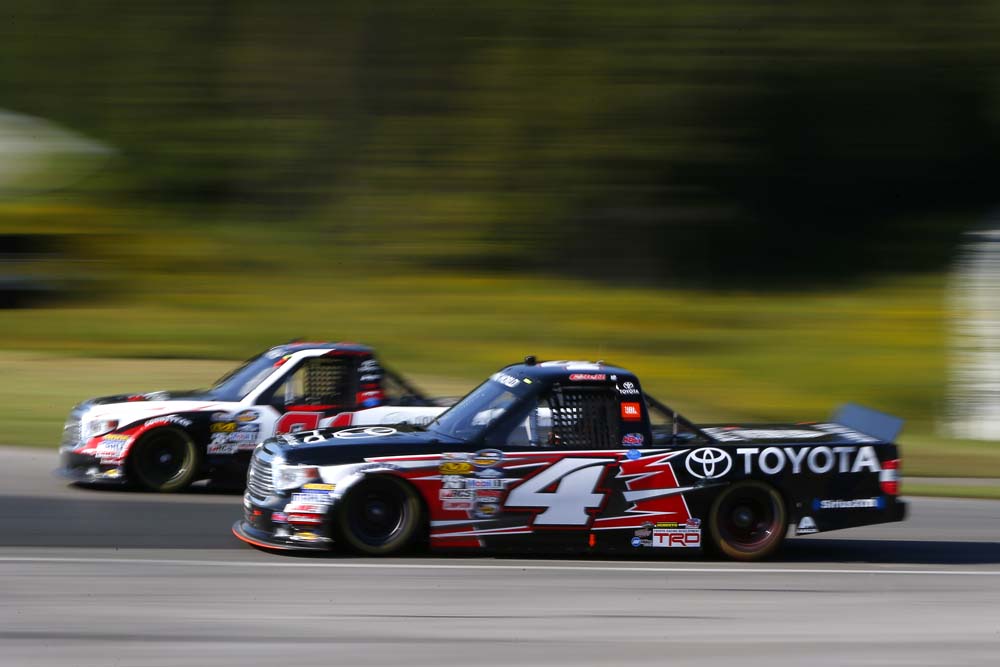 The box score will show that Christopher Bell started 16th and finished fifth in his NASCAR Camping World Truck Series road course debut, but sometimes the statistics don’t tell the whole story. After spinning and making contact with the wall in Saturday afternoon’s qualifying session, the No. 4 Toyota Racing team was forced to make significant repairs to the rear end of its Tundra leaving Bell to start at the rear of the field for Sunday’s event at Canadian Tire Motorsport Park in Bowmanville, Ontario due to unapproved adjustments per the NASCAR rule book.

After the green flag waved, the formula of sound strategy atop the pit box from crew chief Jerry Baxter, flawless pit stops from the over-the-wall crew and mistake-free driving behind the wheel allowed the No. 4 team to come from shotgun on the field to run inside the top 10 for the majority of the 66-lap event. Bell was scored in the seventh position for the start of NASCAR overtime and was able to work his way up into the top five during an exciting final two-lap shootout.

“Jerry (Baxter, crew chief) did a great job calling the race on the pit box and we were able to stay out of trouble and manage a top five out of it,” Bell said. “To come in here, after we were really struggling in practice, I think we were 14th and 17th in practice, then we started at the tail because I crashed in qualifying. This was a good day, just wish we had a little bit more speed in our Toyota Tundra, but overall a really good day.” 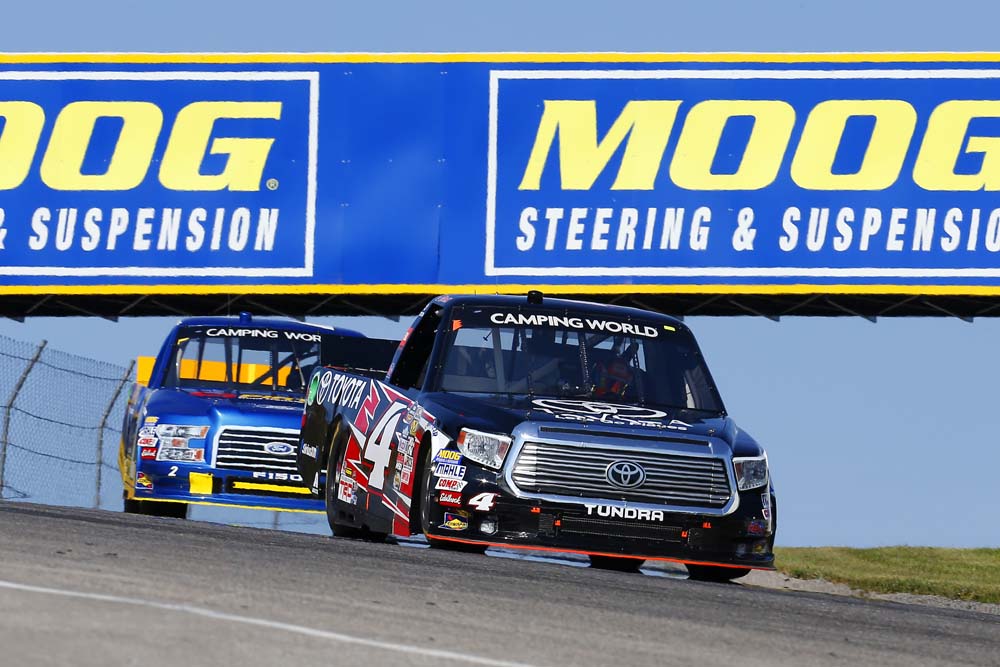 Per the strategy formulated before the start of the race, Baxter summoned Bell to pit road for the first time on lap seven for a fuel-only stop. While on pit road, the first caution of the race occurred leaving the No. 4 Tundra scored in the 26th position for the ensuing restart. By lap 10, the talented youngster had worked his way into the top 12 and as teams started executing their pit strategies was able to shuffle his way up to the sixth position when the caution clock expired on lap 25.

Bell was running in the runner-up spot at the halfway mark of the event, before visiting pit road for the final time on lap 35. Once on pit road, the over-the-wall crew put on four fresh tires and filled his Toyota with enough fuel to make it to the end of the event.

When the caution clock expired on lap 43, the No. 4 Tundra was scored in the 14th position. With five teams hitting pit road, Bell moved up to the ninth positon for the lap-48 restart. By the time the next caution occurred on lap 53, the 21-year-old had maneuvered his way up to the ninth position. He remained there through one more caution and then picked up two more spots by the time the final caution of the race occurred on lap 61 setting up overtime.

Bell appeared to be in line for a solid sixth-place finish coming into the final corner, but the top two trucks made contact and played bumper cars down the outside wall of the frontstretch. The third-place truck was trying to avoid the top two and went spinning off Turn 10, leaving the No. 4 Toyota Racing team with their sixth top-five finish of the 2016 season.

Bell remained seventh in the Truck Series championship standings and with one win is locked into the inaugural eight-driver Chase which begins at New Hampshire Motor Speedway on Sept. 24.

The 15th race of the 2016 season featured six cautions for a total of 18 laps. There were six lead changes among five drivers.

Bell will be back behind the wheel of the No. 4 JBL Tundra when the Truck Series resumes action Friday, Sept. 16 at Chicagoland Speedway in Joliet, Ill. Live coverage of the American Ethanol 225 begins with the NCWTS Setup show at 8 p.m. ET on Fox Sports 1.