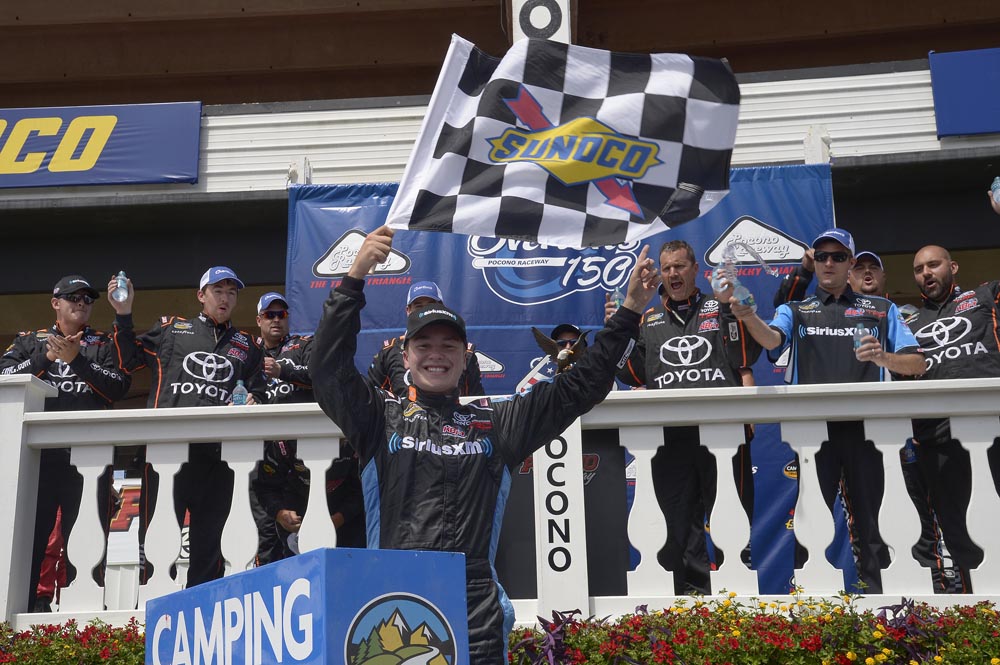 Christopher Bell worked his way around John Hunter Nemechek with seven laps remaining and pulled away to a 1.964 second victory in the NASCAR Camping World Truck Series Overton’s 150 at Pocono Raceway in Long Pond, Pa. on Saturday. The victory was Bell’s series-leading fourth of 2017 and moved him past reigning Truck Series champion Johnny Sauter in the lead in the Truck Series regular season point standings.

The win was the third consecutive at the “Tricky Triangle” for Kyle Busch Motorsports. Owner-driver Kyle Busch won in 2015 and William Byron was victorious last season 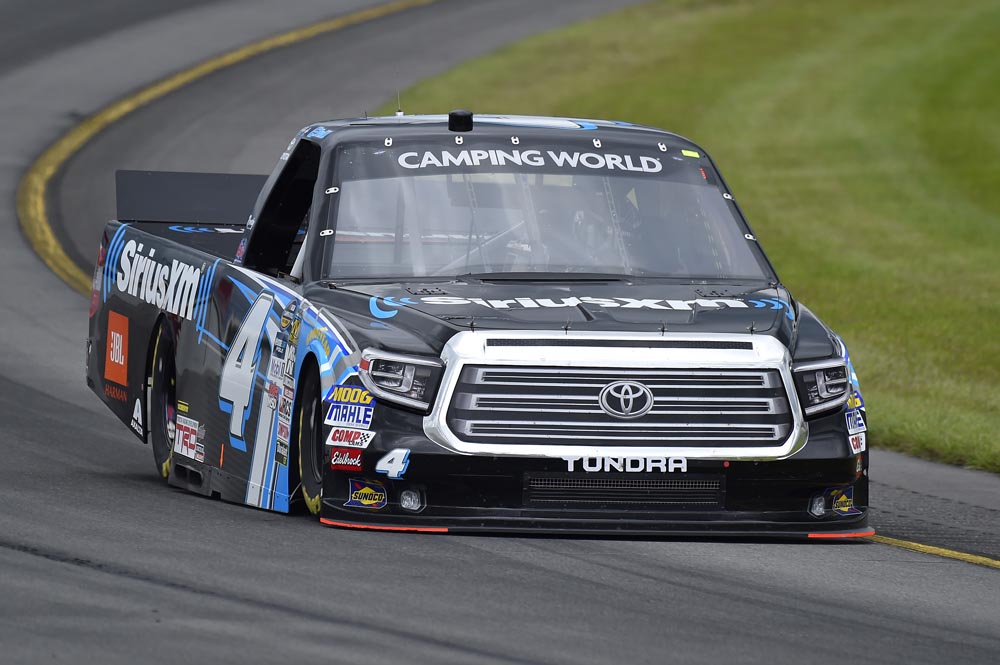 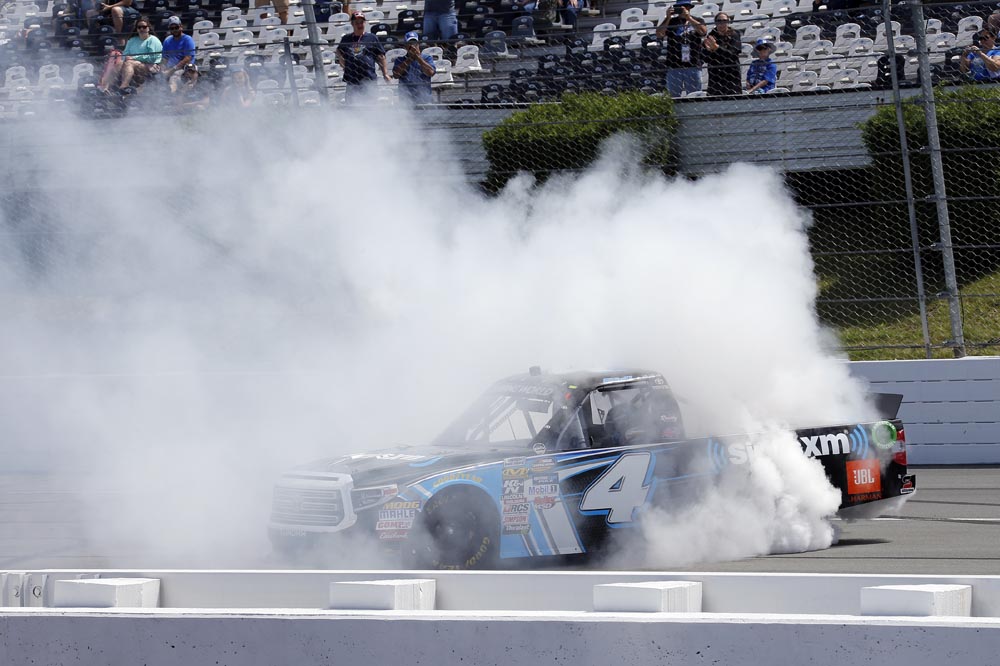 How difficult was it to make the pass and get the victory?

“It was really tough, but my guys do the best and they take really good care of me. Rudy (Fugle, crew chief) does a great job on the pit box and Tony (Hirschman, spotter) does a great job on top. I can’t say enough to be able to drive for Kyle Busch Motorsports – this SiriusXM Tundra was excellent. I’m glad we were able to get SiriusXM to victory lane, we’ve had them on the truck a lot, but we haven’t been able to win. I have to thank our partners at Toyota, JBL, TRD and everyone back at KBM – all the guys back in the fab shop that build these super-fast Tundras and Joe Gibbs Racing Engines – it’s just really a pleasure to drive for them.”

Can you talk us through the pass you made on John Hunter Nemechek?

“The only real passes that I made down the front straightaway were when they gave it to me so it was pretty tough because I wasn’t good enough with the side draft to be able to stall the guy beside me and clear him by the time I got to turn one. Then I looked in my mirror when we were side-by-side, we were just bringing all the other guys behind us with us so I just kept trying to figure out where I was going to beat him at and thankfully I showed enough nose to where he didn’t get to the bottom of the tunnel turn and then it screwed up his exit off of two.”

How strong was your Tundra today?

“My Tundra has been really good all weekend since we got here and I knew that we had the better truck, but it was just a matter of planning out the pass. Whenever I kept trying to dive inside of him down the front straightaway, I could never stall him enough to get clear by the time I got to turn one and I kept looking in my mirror and every time we would get side-by-side on the straightaway, we would just bring all those guys and get them closer to us. I knew my best bet was to try and find somewhere else to get them and luckily I was able to get inside of him enough to where he couldn’t get down to the bottom of the tunnel turn and then I was able to get a run. Just really proud of everybody on this SiriusXM Tundra, they do a great job for me.”

How were you able to work through the strategy?

“I knew pitting at lap 30 was the right thing to do because we were able to get the stage points and then still pit and get tires. There were guys that pitted before the stage end and it made it pretty tough because they restarted pretty far back. It’s just awesome to look in the grandstands and see all the people – the people are why we’re racing so thank you to all of the people that came out today and hope you enjoyed the show.”

What does it mean to have taken over the points lead with this victory? 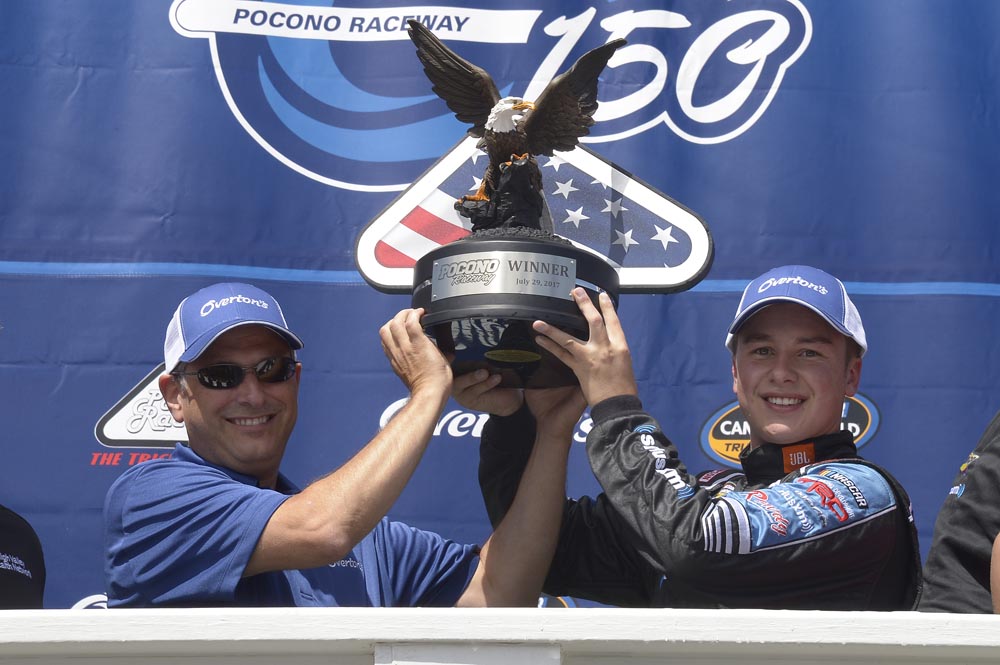 Bell leaves the 12th race of the season leading the Truck Series championship standings for the first time in his career. After collecting 57 points Saturday, he moved 18 points ahead of reigning champion Jonny Sauter. The Oklahoma native has earned 24 playoff points this season.

Bell will be behind the wheel of the No. 4 JBL/SiriusXM Tundra when the Truck Series resumes action on Saturday, Aug. 12 at Michigan International Raceway in Brooklyn. Live coverage of the LTI Printing 200 begins with the NCWTS Setup Show at 12:30 p.m. ET on FS1.