Bell and JBL Team Start Round of 6 with Strong Finish 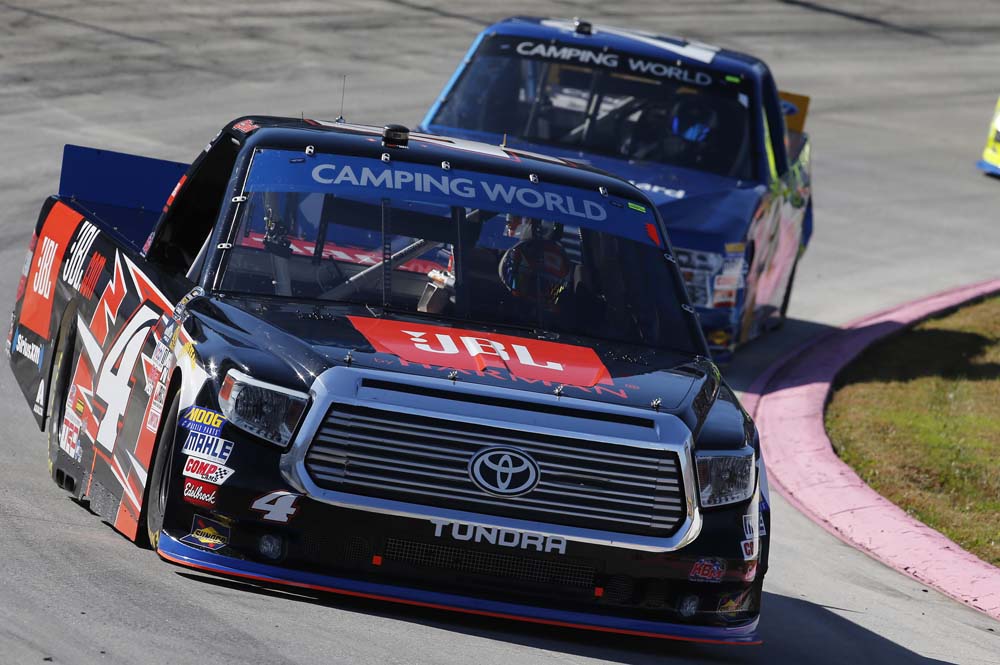 Christopher Bell and the No. 4 JBL Racing team started off the Round of 6 of the inaugural NASCAR Camping World Truck Series Chase with a solid fourth-place finish in Saturday’s Texas Roadhouse 200 at Martinsville (Va.) Speedway. Bell, who finished 19th in the spring event at ‘The Paperclip,’ started from the sixth position and recorded and average running position of 5.7 en route to his sixth consecutive top-six finish this season and ninth top-five overall in 2016.

Chase contender Johnny Sauter won the 200-lap event and with the victory automatically advances to the Championship 4 at Homestead (Fla.) Miami Speedway. Bell’s fourth-place finish was the second best of the six drivers still eligible to earn the Truck Series championship and with two races remaining in the Round of 6 finds himself 13 points ahead of Matt Crafton for the fourth and final spot in the championship event.

“Today’s effort was a lot better than Martinsville in April, that’s for sure,” Bell said of his 12th top-10 finish across the last 13 races. “Really proud of my team today — they brought an awesome Tundra and I’m just glad I was able to do my job and come away from here with a top-five. That’s a really big points day for us. It was a shame that I didn’t get John Hunter (Nemechek) at the end, but we came home fourth at Martinsville, which we knew was going to be our weak link in the Chase. Really proud of all our guys. Just have to give a big thank you to Jerry (Baxter, crew chief); he brought a really strong JBL Tundra today. Glad to escape here with a top-five.” 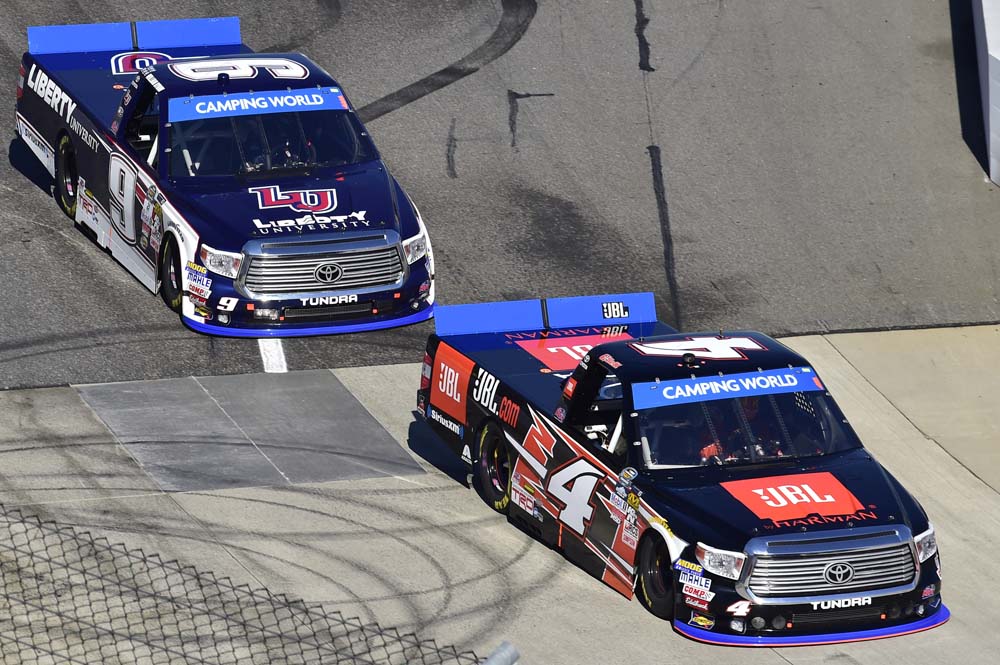 Bell came into Saturday’s race knowing that he would have to improve upon the performance he delivered in his Martinsville debut in April and come out of the first race in the Round of 6 in solid standings if he is going to earn one of the four positions in the Championship 4. After studying race tapes, and make several laps around Martinsville on iRacing he improved his qualifying position eight positons from 14th in April to sixth on Saturday.

The 21-year-old rookie contender showed veteran poise throughout the 200-lap event and combined with solid stops by the JBL over-the-wall crew allowed him to race inside the top 10 throughout the entire event. He was running sixth when he visited pit road for the first time on lap 50 for four tires and fuel with a trackbar adjustment and returned to the track in sixth as well.

During the next green-flag run Bell reported that his JBL Tundra needed to be more secure on entry, but remained running in the sixth spot. A one-truck accident on lap 109 allowed crew chief Jerry Baxter to make another swing at trying to improve the handling of the No. 4 Toyota. After a speedy four-tire and fuel stop with another trackbar adjustment, the Oklahoma native returned to the track scored in fourth for the ensuing restart on lap 115.

The third accident of the day on lap 150 left crew chiefs employing varying strategies. A few teams only took two tires, while Bell and all of the drivers that made up the top five elected for four-tire stops. The JBL Tundra was scored in the eight spot for the lap-155 restart. He was able to gain one important spot before the next caution occurred on lap 163, which allowed him to restart on the preferred inside lane when the field went back green on lap 169.

Bell took advantage of the inside lane on the ensuing restart on lap-169 and two laps later had maneuvered his way into the fifth position. The final restart of the event took place on lap 182, and the talented youngster once again took advantage of his position on the inside lane to advance into the fourth spot, where he remained when the field crossed the finish line.

Sauter’s win was the 12th of his Truck Series career, his second of 2016, and his third at Martinsville. NASCAR Sprint Cup Series rookie Chase Elliott finished in the runner-up position 0.316 seconds behind Sauter. Nemechek finished third, Bell fourth and Timothy Peters rounded out the top-five finishers.

Bell’s KBM teammate William Byron finished eighth in his Liberty University Tundra and currently holds the fourth and final position in the Championship Four. Harrison Burton was running in the top 15 in his Truck Series debut before getting turned from behind late in the race and losing a lap. He ended the day with a 22nd-place finish in his DEX Imaging Tundra.

The first race in the Round of 6 in the Truck Series Chase featured five cautions for a total of 33 laps. There were six lead changes among five drivers.

Bell will be back behind the wheel of the No. 4 JBL Tundra when the Truck Series resumes action Friday, Nov. 4 at Texas Motor Speedway in Fort Worth. Live coverage of the Long Horn 350 begins with the NCWTS Setup show at 8 p.m. ET on Fox Sports 1.