Bell Advances to Round of 6 with Sixth-Place Finish 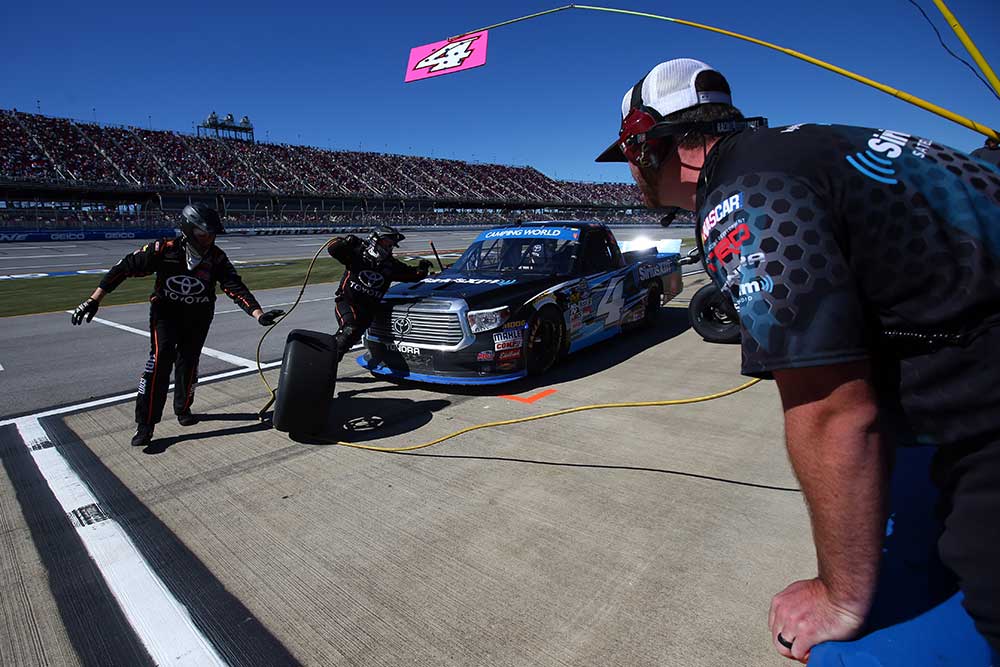 Christopher Bell and the No. 4 SiriusXM team recovered from a broken shifter in the middle stages of Saturday’s NASCAR Camping World Truck Series fred’s 250 at Talladega (Ala.) Superspeedway to earn a hard-fought sixth-place finish. Bell earned finishes of sixth or better in each of the three races in the Round of 8 of the inaugural Truck Series Chase and will now be seeded second for the Round of 6 that begins next Saturday at Martinsville (Va.) Speedway.

“It was a struggle — today was a struggle,” said Bell, who earned his first career top-10 finish at a superspeedway. “We fought all day long and I’ll tell you what — my team, they deserve this championship more than anyone. They’re carrying us through here and if anything can go wrong, it has gone wrong, but we’ve been able to fight through every single week and that’s why I’m really proud to be on this team. All the guys on this team, this Kyle Busch Motorsports No. 4 team, they work really hard. Without all our partners — SiriusXM, JBL, Toyota, TRD (Toyota Racing Development), everyone at KBM and at the shop, and all the guys at the KBM chassis shop as well and Joe Gibbs Racing engines – without them, we wouldn’t be here, so really thankful to be driving this No. 4 Tundra.”

Bell started the 94-lap event from the 14th position and remained there when he received the first scare of the day. John Hunter Nemechek was running in the 12th spot, just in front of the SiriusXM Tundra, when he had an engine expire. When pit road opened, crew chief Jerry Baxter summoned his driver to pit road for a wedge adjustment and a full tank of fuel.

The Oklahoma native took the lap-19 restart from the 14th position, but quickly made his way down to the inside lane and slowly began picking up spots. By the time the second caution of the race occurred on lap 37, the No. 4 Toyota had advanced up to the seventh position. This time Bell visited pit road for four tires and fuel, but reported that his shifter had broken shortly after exiting pit road. 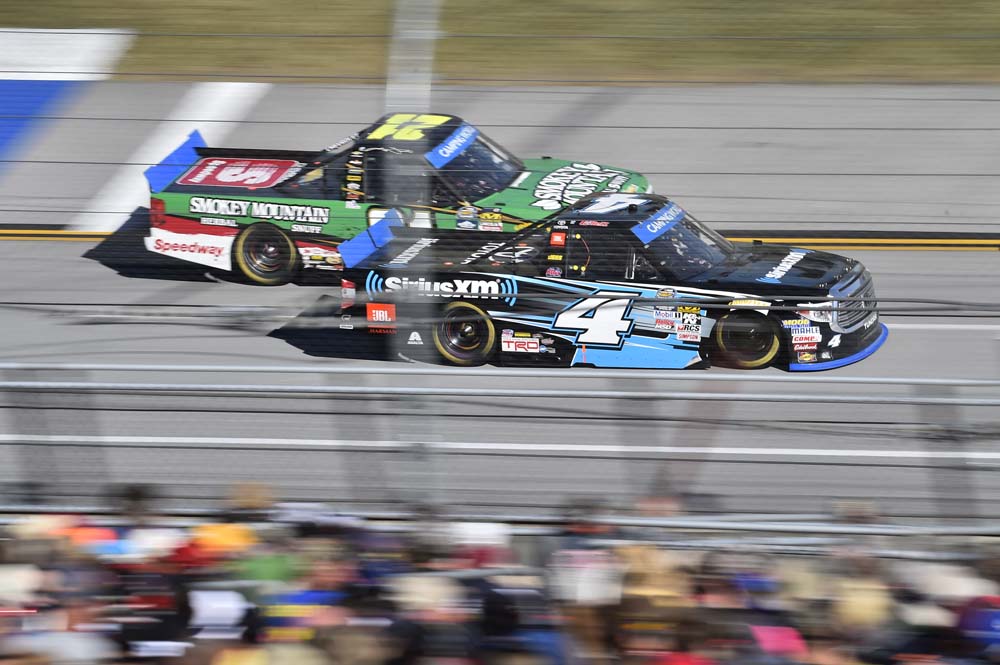 The Rookie of the Year contender was able to use what was left of his shifter lever to get his Tundra in gear on the ensuing restart, while his SiriusXM crew began coordinating a plan to fix the problem during the next caution. Bell was scored in the 25th position for the restart on lap 38 and settled into the back of the pack with fellow Toyota competitor and Chase contender Matt Crafton.

A six-truck accident on lap 44 presented the No. 4 team the first opportunity to fix the shifter issue on their Tundra. When pit road opened, Bell came to rest in his pit stall and turned off his engine. One crew member took down the window net and crawled in the driver side window, while the another took out the side window and crawled in the right side of the vehicle. They went to work unfastening the shifter lever and mounting a new one while the field was under caution. After two visits, they were able to get one bolt into the shifter lever without losing a lap to the leaders.

Bell took the lap-48 restart scored in the 25th position and had advanced just one spot in the running order when a three-truck crash happened just in front of him and slowed the field for the fourth time. The 21-year-old brought his SiriusXm Tundra back to the attention of his crew, who climbed back into this Tundra and affixed the second bolt.

The young driver communicated that everything felt back to normal and the team turned their attention to paying attention to Bell’s position in the championship points among the Chase drivers. “The Big One” would strike shortly after the field went back green and collected 15 trucks. Among those was Bell’s Tundra, which received minor cosmetic damage on the right side and flat-spotted tires.

After the red flag was lifted, Baxter summoned his driver to pit road where the over-the-wall administered a four-tire stop and used a baseball bat to pullout the right-side fender wells. He visited pit road one more time before the field went green to top off with enough fuel to make it to the end of the race.

Before the race restarted, Baxter alerted Bell that several drivers in the last accident were unable to continue and that no matter where he finished, he would be able to advance to the Round of 6 unless Daniel Hemric, who already had significant damage to his truck, was able to win the race.

After restarting from the 16th position on lap 68, Bell was able to advance up to the eighth position working in tandem with teammate William Byron. The field was slowed for the sixth time when Hemric spun all by himself. The damage to Hemric wasn’t enough to force him to the garage, but wounded his truck enough that he would not be able to compete for the win. Baxter updated Bell that he was now free to do whatever he needed to do to go for the win and didn’t have to air on the side of caution because of points.

The field was slowed for the final time when Matt Crafton’s engine expired on lap 88. Bell took the final restart from the seventh position, fell back to ninth when the field took the white flag and then ended up gaining three spots on the final lap to earn his fifth consecutive top-10 finish and his 11th across his last 12 starts.

Byron finished 10th in his Liberty University Tundra. Cody Coughlin was running inside the top five before experiencing a mechanical issue in the drive shaft just before the halfway mark of the race and ended up finishing 31st in his JEGS Tundra.

The final race of the Round of 8 in the Truck Series Chase featured seven cautions for a total of 33 laps. There were 15 lead changes among nine drivers.

Bell scored the second most points across the three races that made up the Round of 8 and has advanced to the Round of 6 of the inaugural Truck Series Chase. He will be back behind the wheel of the No. 4 JBL Tundra when the Truck Series resumes action Saturday, Oct. 29 at Martinsville (Va.) Speedway. Live coverage of the Texas Roadhouse 200 begins with the NCWTS Setup show at 1 p.m. ET on Fox Sports 1.