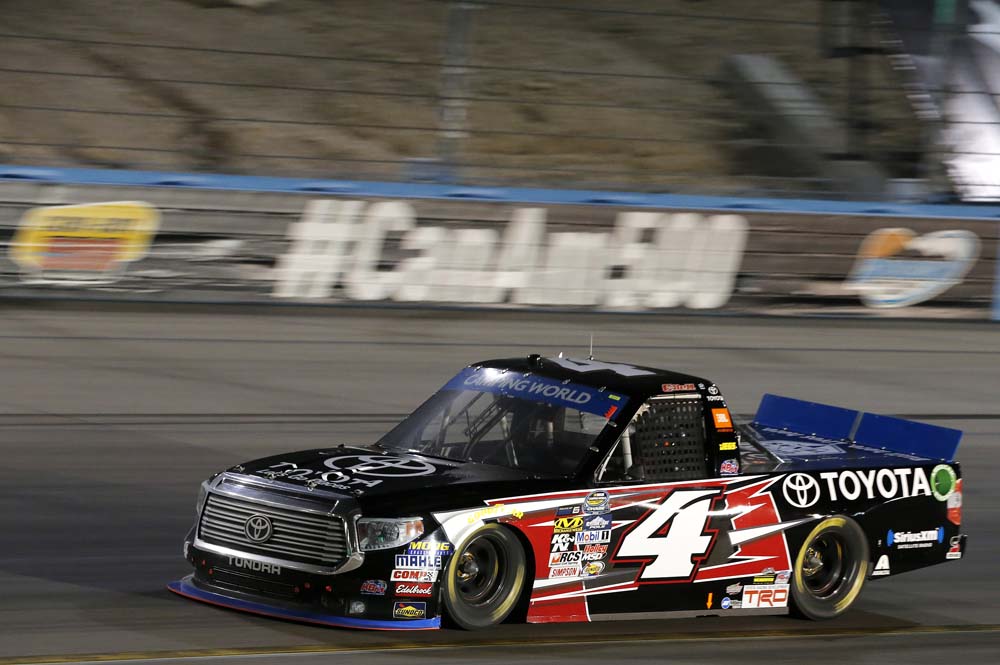 Christopher Bell and the No. 4 Toyota Racing team did exactly what they needed to do in Friday night’s Lucas Oil 150 at Phoenix (Ariz.) International Raceway, bringing home a seventh-place finish and advancing to next Friday’s NASCAR Camping World Truck Series Championship 4 race at Homestead (Fla.) Miami Speedway.

Bell started from the fifth position and was running third with 50 laps to go, but got shuffled back six spots on a restart and was teetering back and forth on the cusp of elimination from the inaugural Truck Series Chase. The 21-year-old rookie was in a three-way tie for the final transfer spot until his Kyle Busch Motorsports (KBM) teammate William Byron brought out a caution after an engine failure with eight laps to go. Byron’s misfortune allowed the No. 4 team to breathe easy as the seventh-place finish earned them the third seed, 17 points ahead of Byron, who ended the Round of 6 in the fifth spot. 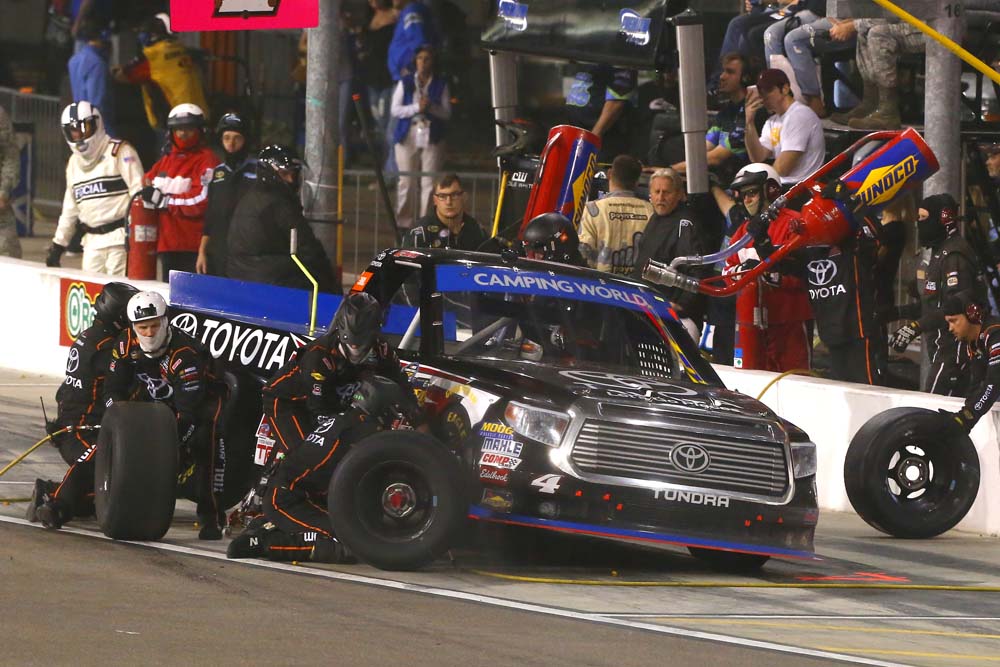 “Some days it’s not your day, but today was definitely our day, that’s for sure,” Bell said of advancing to the Championship 4. “I don’t know what happened, we had such a good Tundra there at the beginning of the race and the light switch flipped off there with the restart with about 40 to go and then all of the sudden we just got ate up on the restart, a truck slid in front of us and kind of felt like that was the end of the year right there. The good Lord was on our side and we get to race for a championship at Homestead. I hate it for William (Byron) because obviously he was one of the trucks that was expected to go to Homestead and be the guy to beat really. It’s not pretty how we got in, but we got in and now we’re going to be a lot better than we were today.”

Have the thank all of our partners — JBL, Toyota, SiriusXM, DC Solar and all the guys at the Kyle Busch Motorsports shop and everyone at the fab shop – there’s just so many guys involved with this team and everyone at Joe Gibbs Racing engines. All the fans and especially the Veterans – thank you for allowing us to come out here and do what we love to do. We’re going to Homestead and we’re going to race for a championship and will be a lot better than we were today.”

With passing at a premium Bell had a quick Tundra but was only able to advance one position from his fifth starting position up to fourth on lap 9 and remained there until he visited pit road for the first time on lap 68. Crew chief Jerry Baxter ordered up a four-tire and fuel stop with a trackbar adjustment in an effort to correct a Tundra that his driver described as “tight center, loose off.” Quick work by the over-the-wall crew allowed their young driver to take the ensuing restart from the third spot.

During the middle stages of the 150-lap race, Bell communicated that the No. 4 Tundra was “free on exit” as he remained in the third spot behind his KBM teammates Byron and eventual race winner Daniel Suarez. After a debris caution slowed the field for the seventh time on lap 99. On the ensuing restart, Tyler Reddick try to use the shortcut through the dogleg exiting Turn 2 and went sliding wildly up the track in front of the No. 4 Tundra. In order to avoid contact, Bell had to hit the brakes which allowed two more trucks to get by him on the inside lane.

A one-truck accident on lap 108 set up another restart, which shortly after taking the green saw Bell end up three-wide and having to play it safe ended up losing two more spots. With Timothy Peters running third and Matt Crafton fifth, Bell found himself one point behind the cutoff line in the ninth spot. He quickly gained back one position to move into a tie with Crafton, but with the two-time champion holding the tiebreaker via a runner-up finish at Texas Motor Speedway in Fort Worth, the rookie was told that he needed to gain at least one more position to be able to advance with 35 laps remaining. 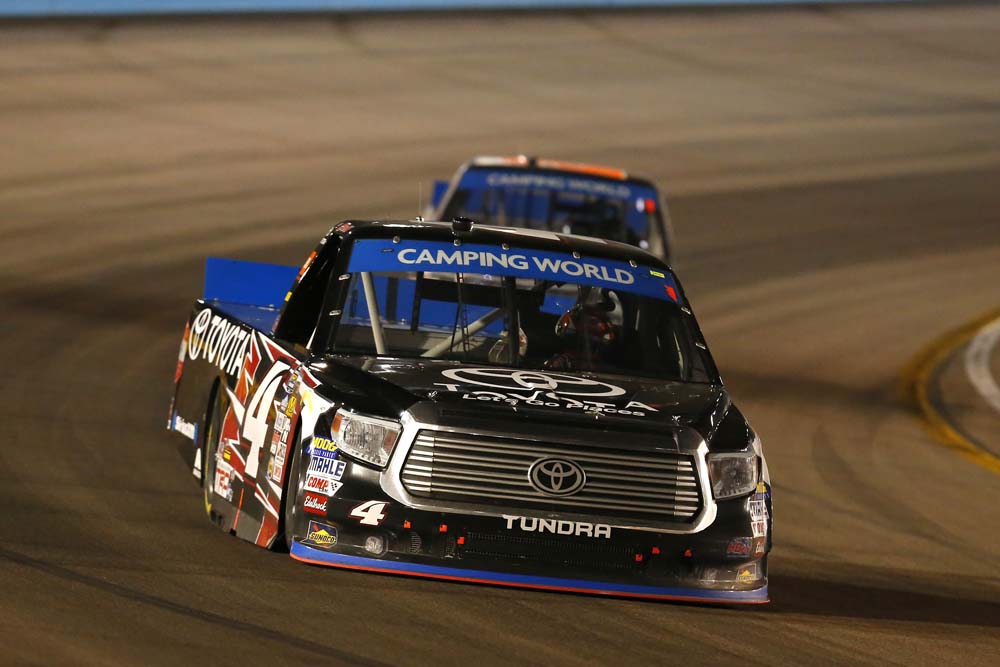 Byron had over a five second lead when he communicated to his team that his engine was blowing up with 10 laps to go and fell off the pace. His engine finally expired two laps later and brought out the ninth and final caution. Bell found himself in a three-way tie with Peters and Crafton, but Peters lost a spot in the closing laps and the No. 4 team moved up to the third position in the standings.

Suarez earned his first NASCAR Camping World Truck Series victory in his 25th start for KBM. It was the 10th KBM victory in 2016. Johnny Sauter finished 0.510 seconds behind Suarez in the runner-up position. Crafton finished third followed by Cameron Hayley and Peters. Noah Gragson finished 16th in his Truck Series debut and Byron ended up 27th.

The second race in the Round of 6 in the Truck Series Chase featured nine cautions for a total of 49 laps. There were five lead changes among three drivers. Suarez and Byron combined to lead all but four of the 150 laps.

Bell will look to earn the No. 4 KBM team back-to-back championships next Friday, Nov. 18 at Homestead (Fla.) Miami Speedway. Live coverage of the Truck Series championship event begins with the NCWTS Setup show at 7:30 p.m. ET on Fox Sports 1.