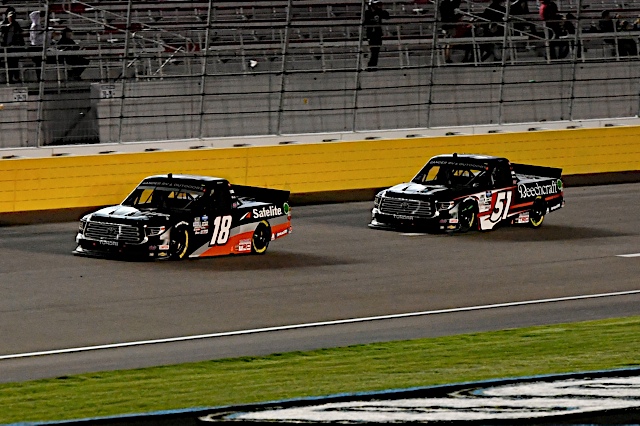 Christian Eckes was running up front battling with his owner Kyle Busch for the opening two stages of Friday night’s Strat 200 at Las Vegas Motor Speedway, before he got shuffled back a few spots on a restart early in the Final Stage and then put into the wall by another competitor as he was making his way back towards the front of the field.

After making contact with the wall, the damage to the right-front fender caused the tire to blow and sent the Safelite Tundra caroming into the outside wall and bringing out the caution on lap 75. After several trips down pit road to make repairs to Eckes’ Tundra he would return to the track, but limp home multiple laps down in the 23rd position.

What happened early in the final stage when you made contact with the wall?

“We had a really fast Safelite AutoGlass Tundra tonight – ran up front most of the race until the final stage when I got put in the wall by the 38 truck. After contact with the wall, we blew a right-front tire from the damage and in the end went a few laps down and ended up with a 23rd-place finish.”

What was it like running up front battling with your owner, Kyle Busch?

“It was fun — we both had fast Toyota Tundra and were by far the class of the field. We were a little bit off of him, but I felt like we were one adjustment away from being able to keep up with him.”

Eckes will be back behind the wheel of the No. 18 Safelite Tundra when the NASCAR Gander RV & Outdoors Truck Series resumes action March 14 at Atlanta (Ga.) Motor Speedway. Live coverage of the Georgia 200 begins Saturday at 1:30 p.m. ET on FS1.