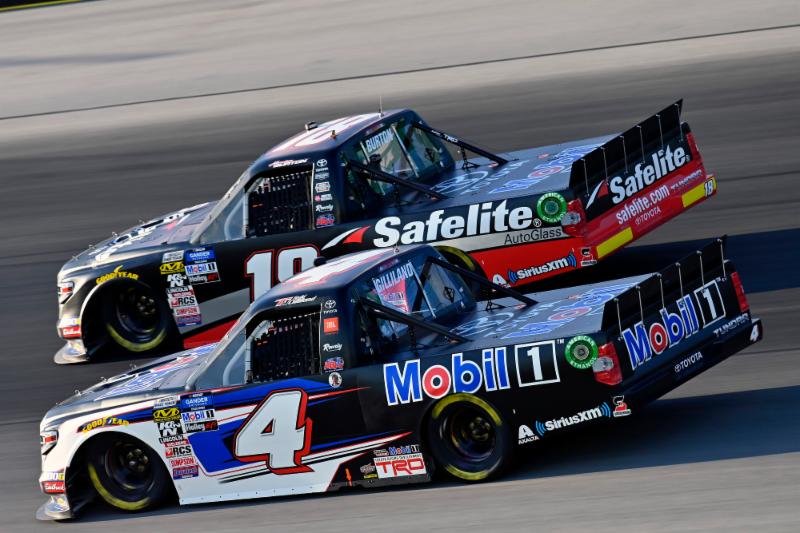 Todd Gilliland and the No. 4 Mobil 1 team were running in the top-5 when their bad luck continued, and engine issues crippled their chances at a win on Thursday evening in the Buckle Up In Your Truck 225 at Kentucky Speedway. In two NASCAR Gander Outdoors Truck Series practice sessions Thursday morning, Gilliland was 12th and sixth-fastest respectively. During single-vehicle qualifying on Thursday afternoon, Gilliland posted the third-fastest lap.

Gilliland was running firmly in the top-five when engine woes struck in the second stage. The No. 4 Mobil 1 team was unable to diagnose the problem on pit road, but they managed to nurse the ailing Toyota Tundra through most of the third stage before losing power and retiring to the garage with three laps to go in the event. Gilliland recorded a 17th-place finish.

“We were running up front there – I think from the very start we had motor problems. Down the straightaways I was really bad. Trying to pass people was really hard, they were able to get such big runs on me at the beginning. We were able to finish the first stage in third, even down on power a lot. It was probably one of the best Tundras I’ve ever had. That’s when it’s the worst. You never have motor problems when you’re in the back anyway. It’s just how it goes. We started off today really, really bad, and to be contending – I think we could have won that race today – it was just a good team effort. We made a lot of good changes today. We just have to keep taking the positives out of it. I don’t know what happened to the motor, but I’m sure they’ll figure it out. We’ll go on to the next few races and we’ve got to win.”

Brandon Jones, driver of the No. 51 Toyota Tundra, finished 23rd

Gilliland and the No. 4 team rank eighth in the Gander Trucks Driver Championship Standings following the 13th race of the season, 150 points behind the leader.

Todd Gilliland and the No. 4 JBL/SiriusXM team will return in two weeks at Pocono Raceway, on Saturday, July 27. Live coverage of the Gander RV 150 begins at 1:00 p.m. EST on FS1.