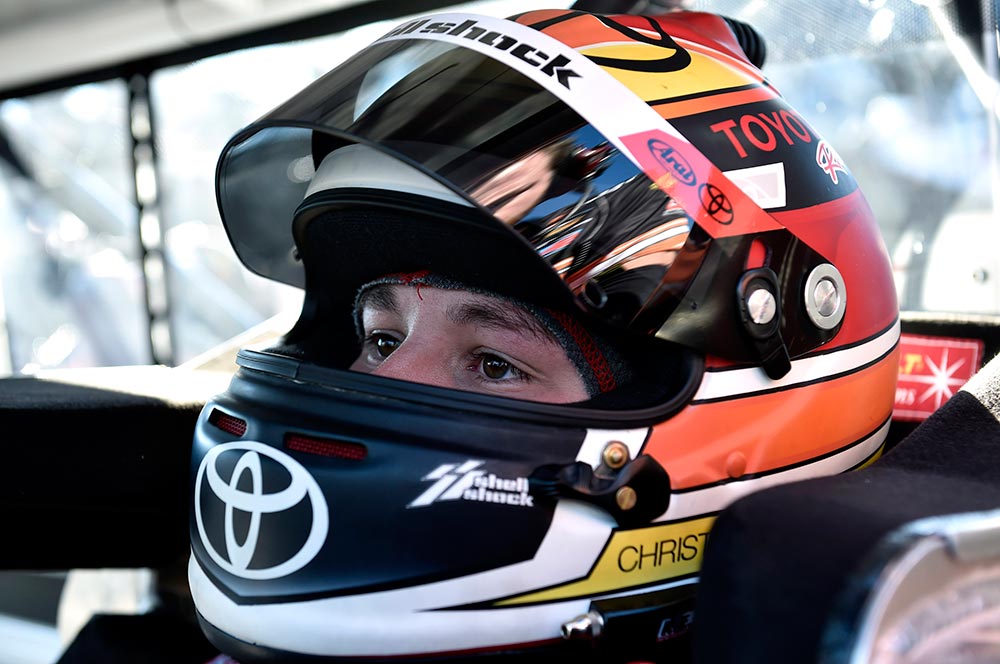 MOORESVILLE, N.C. (May 3, 2016) – The NASCAR Camping World Truck Series may have been idle for four consecutive weekends, but 21-year-old Christopher Bell didn’t let the break slow him down. Since the last Truck Series event at Martinsville (Va.) Speedway on April 2, Bell has managed to find himself in the seat of a race car each weekend in an effort to keep his skills sharp for when he gets back behind the wheel of his No. 4 JBL Tundra for Friday night’s Toyota Tundra 250 at Kansas Speedway in Kansas City.

Bell, who won a combined 44 feature events across a variety of disciplines of motorsports in 2014 and 2015, picked up his first two victories of 2016 during the month of April. The Oklahoma native had a dominant win in Kyle Busch Motorsports’ (KBM) Super Late Model in the CARS Racing Tour Super Late Model Tour Orange Blossom 300 at Orange County Speedway in Rougemont, N.C., on April 16. After qualifying second, he took the lead on lap 10 and remained out front for the remainder of the 150-lap event. The win marked his third in as many starts at the .375-mile paved oval since making his transition to pavement racing late in 2014.

After a two-day Truck Series Rookie test at Bristol (Tenn.) Motor Speedway on April 18 and 19, Bell headed to Salem (Ind.) Speedway on April 24, where he made his ARCA Racing Series debut with Venturini Motorsports. The talented youngster started the 200-lap event at the high-banked .555-mile oval from the second position and went on to lead of race-high 91 laps en route to victory.

The open-wheel dirt standout nearly collected a third victory last weekend while making his first start of the season in the Performance Open Wheel Racing Inc. (POWRi) National Midget Series at Belle-Clair Speedway in Belleville, Ill. After starting on the front row, he held a sizable lead with just over 10 laps remaining in the 30-lap feature, but ended upside down on the exit of Turn 4 after contact from a lapped vehicle. After restarting at the tail end of the field, the former USAC Midget National champion was able to work his way back into the top 10 before the end of the race.

Now, Bell heads to Kansas Speedway for the second mile-and-a-half race on the 2016 Truck Series schedule. At Atlanta Motor Speedway in Hampton, Ga., earlier this year, Bell proved that he will be one of the drivers to beat on the 1.5-mile tracks this season after leading 42 laps, recording the fastest green flag speed (171.845) and being the fastest truck on the track for 27.1 percent of the green-flag laps.  The No. 4 JBL Tundra was out front by nearly a second with eight laps to go when a right-front tire blew and ended the team’s bid for KBM’s first victory at the Atlanta track.

Bell was back to his winning ways in April. Now he hopes that the confidence boost will allow him to carry the momentum into May and collect his second career Truck Series victory, and first on pavement, Friday night in Kansas.

After some disappointing results to start the season, how difficult is it to have a month off between Truck Series starts?

“It’s horrible — it really is. It was a difficult start to the season when you look at the results, but the silver lining is that we’ve had really good speed. Taking the white flag at Daytona, we were sitting there in the second row on the outside in a spot to compete for a win. When you go to these races, all you can ask for is to be in contention and thankfully at both Daytona and Atlanta we had speed and were racing for the win late in the race. At Atlanta I made a mistake and crashed a couple of guys at the end of the race and felt horrible about that. Then we were leading at the end and had a flat tire. We had to wait another month to go to Martinsville, where we had another tough weekend and now we’ve had another month off. It’s hasn’t been fun to wait another month to get back out there, but fortunately for me I was able to keep racing in different vehicles during the month off.”

How big of a boost to your confidence has it been to get a couple of wins in other series while the Truck Series has been idle?

“The mental aspect of racing is such an important part and when your confidence is high it makes everything so much easier. Over the past couple of weeks, I’ve been able to grab a couple of wins and my confidence has definitely risen. I’m looking forward to getting back behind the wheel of the JBL Tundra this weekend at Kansas and carrying that confidence over. I know that KBM has had really fast trucks there the last few years and we were really fast at Atlanta earlier this year, so I’m confident that we’ll be able to run up front again and at the end of the race be there competing for the win again on Friday night.”

With the speed your team showed at Atlanta, are you excited to be getting back to another mile-and-a-half track?

“We had a really fast JBL Tundra earlier this season at Atlanta and pretty much every intermediate track the last couple years at least one of the KBM trucks has been up front competing for the win, so we’re looking forward to getting back to that type of track. Kansas is much smoother than Atlanta, so it will be a little bit of a different feel for Christopher, but we have three practice sessions for him to get settled in. He managed to get a lot of seat time this last month while we were off between our test at Bristol and racing Late Models, ARCA and some dirt stuff. Not only was he able to keep his skills sharp, but he was able to get a few wins, so I know he’s really pumped up heading into this weekend.”

KBM-32: The No. 4 JBL Racing team will unload a brand new chassis, KBM-32, for Friday’s Toyota Tundra 250 at Kansas Speedway in Kansas City.

Baxter’s Truck Series drivers have posted two top-10 finishes and an average finish of 9.8 across four starts in the Sunflower State.