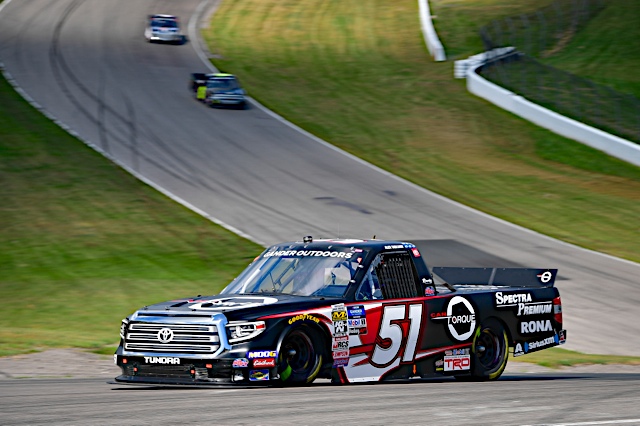 Road course ace Alex Tagliani earned his career-best NASCAR Gander Outdoors Truck Series finish at Canadian Tire Motorsport Park on Sunday with a runner-up finish in the No. 51 CanTorque Tundra. On Saturday morning, Tagliani was third-fastest in first Gander Trucks practice and ninth-fastest in final practice. On Sunday morning, Tagliani made his way to the second of two rounds of group qualifying where he posted the fourth-fastest lap. Following qualifying, Tagliani participated in the NASCAR Pinty’s Series race, and after leading on the final lap, ended up finishing fourth.

As the green flag flew, Tagliani followed teammate Todd Gilliland into the third position, but soon reported that his Tundra was tight and he fell back, but an early pit stop for four tires, fuel and adjustments helped get him back on track and he was soon back near the front of the field. As the race came to a close, the Canadian driver was unable to gain on eventual winner Brett Moffitt, and he ultimately finished second in his fifth NASCAR Gander Outdoors Truck Series start at Canadian Tire Motorsport Park.

Alex Tagliani, driver of the No. 51 CanTorque Tundra for Kyle Busch Motorsports:

Really only one spot mattered to him today, but you came up one spot short. Talk about the runner-up finish.

“First of all, it was amazing to run for KBM (Kyle Busch Motorsports). Thanks to everybody there, especially Kyle (Busch) for accepting for me to be in this truck. Thanks to Spectra Premium, CanTorque, RONA. We were just missing loading the front during the race in the fast corner, so I had to overslow the truck down too much in the corner and that’s what made the difference. But nevertheless, it was a pleasure to race for them and good point day for the 51 team.”

What do you think about the competition in the Truck Series and their road course abilities?

“It’s good. The trucks are good. This year, we came with a different tire and maybe we needed to make some changes. You can see that the competition is high. It’s not a very technical road course, but at the same time it makes for good racing. It’s tough, and if you’re just a little bit off, you can’t make it up.”

Todd Gilliland, driver of the No. 4 Toyota Tundra, finished 18th

Harrison Burton, driver of the No. 18 Toyota Tundra, finished 21st

The No. 51 team leaves the 18th race of the season ranked third in the NASCAR Gander Outdoors Truck Series Owner’s Playoff Standings. The No. 51 has earned six wins, 11 top-five finishes and 13 top-10 finishes in 2019.

Christian Eckes will pilot the No. 51 SiriusXM Tundra at Las Vegas Motor Speedway on Friday, Sept. 13. Live coverage of the event begins at 9:00 p.m. EST on FS1.