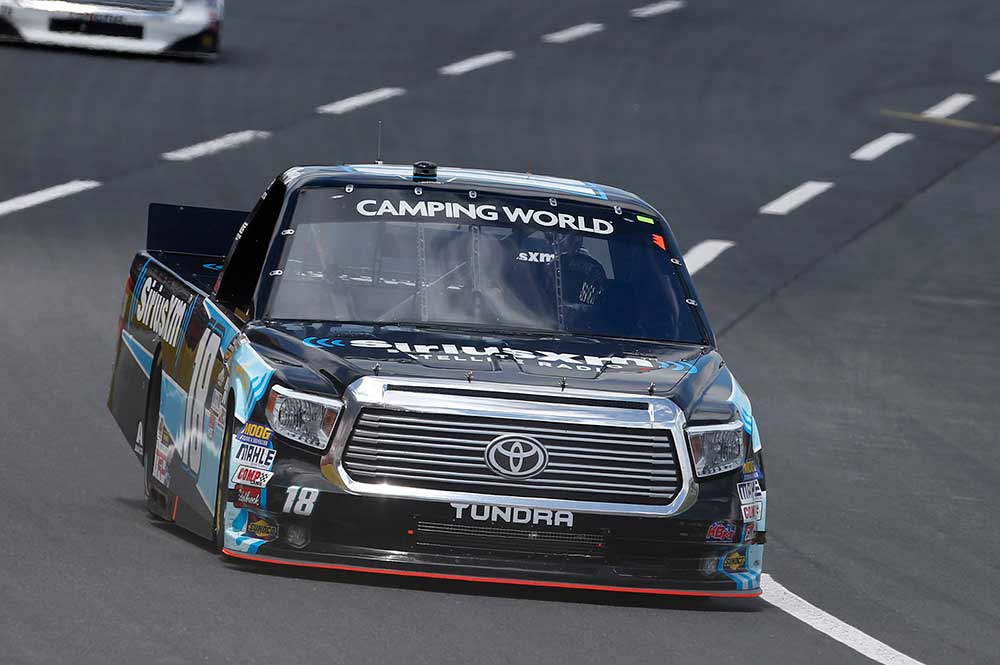 MOORESVILLE, N.C. (Sept. 12, 2016) – Kyle Busch will be making his fourth NASCAR Camping World Truck Series start of 2016 as he returns to theNo. 18 SiriusXM Tundra for Friday night’s American Ethanol E15 225 at Chicagoland Speedway in Joliet, Ill. Busch has been nearly perfect in his five Truck Series starts at the mile-and-a-half venue in the Prairie State, visiting victory lane four times.

Busch led 79 laps en route to victory in his first Truck Series start at Chicagoland Speedway driving for Billy Ballew Motorsports in the 2009 event. He made it back-to-back wins in 2010, this time dominating the event leading 121 laps in Kyle Busch Motorsports’ (KBM) debut season. 2011 was the only year that the Las Vegas native entered the Chicago Truck Series race that he didn’t win. He led 10 laps and finished fifth that season. KBM’s owner-driver returned to victory lane in the 2013 Truck Series race in the Windy City after leading a race-high 52 laps.

2014 proved to be a unique victory, as Busch missed both of Thursday’s Truck Series practice sessions to attend to his Chase for the Sprint Cup Media Day obligations. Erik Jones, who was splitting the 22-race schedule behind the wheel of the No. 51 with Busch that season, dialed the Dollar General Tundra in during practice finishing third and eighth, respectively during the two sessions. When Friday’s qualifying session was rained out and subsequently the race was postponed to Saturday, ‘Rowdy’ was forced to start from the back of the field.

Busch worked his way from the back of the field and took the lead for the first time on lap 52. He had opened up over a four-second lead when he pitted on lap 110, but a lengthy stop and untimely caution shortly after he returned to the track left him one lap down with just under 40 laps remaining. After taking the wave around, the Dollar General Tundra restarted from the eighth position on lap 118. Busch regained the lead with 16 laps remaining and went on to pick up his 41st career victory in NASCAR’s third division. The post-race box score showed that the No. 51 Tundra passed an amazing 59 lead-lap trucks during the event.

With Busch once again tending to Chase for the Sprint Cup Media Day obligations during Thursday’s practice sessions, he will once again call upon Jones to get his SiriusXM Tundra dialed in. Jones, who captured KBM’s first-ever driver’s championship last season, finished sixth in last year’s Truck Series race at Chicago and won the 2015 June NASCAR XFINITY Series race at the 1.5-mile oval.

Not only did Jones and Busch team up for the victory at Chicagoland in 2014, the duo helped KBM nab its third of four Truck Series Owners’ championships that season combining for 10 wins across 22 races. The No. 18 team is hoping that Jones and Busch will once again be a winning combination this weekend and the part-time team can earn its second victory of 2016 and the organization’s eighth overall this season.

Kyle Busch, driver of the No. 18 SiriusXM Tundra:

How challenging will it be to try and win on Friday night without having practiced your SiriusXM Tundra?
“I’m sure it will be a little bit of a challenge in the early stages of the race getting a feel for the handling of the SiriusXM Tundra, but the fact that Erik (Jones) practiced for me in this same situation a couple of years ago and we’ve also done it in the past for some Late Model races will be a big help with making the transition a smooth one — not only for us, but for the team as well with the minimal adjustments that will be needed with moving the pedals and such.”

Wes Ward, crew chief of the No. 18 SiriusXM Tundra:

What is your team’s outlook this weekend with Erik Jones practicing and Kyle qualifying and racing?
“We’re looking forward to getting to Chicago this weekend and trying to bring home another win for KBM. It’ll be unique this weekend in that we have Erik (Jones) practicing and Kyle (Busch) qualifying and racing, but I think for the organization it’s a good opportunity to get feedback on our mile-and-a-half program from two really good drivers. With the communication that has gone on between the two of them the last few years, I’m sure Erik will be able to get the SiriusXM Tundra dialed in to Kyle’s liking and we’ll start the race with some adjustability built into it so if we need to tune on it the first stop we can.”

The ‘Ward’en:
Veteran crew chief Wes Ward is currently in his second season at Kyle Busch Motorsports, where in addition to overseeing the efforts of the No. 18 team’s part-time schedule this season, he serves as the shop foreman. Ward picked up his first career Truck Series victory with Kyle Busch behind the wheel at Martinsville (Va.) Speedway earlier this season. The North Carolina native became a fixture in the NASCAR XFINITY Series garage beginning in the late 1990’s and over the course of 16 years called the shots for over 300 races working with notable drivers such as Dale Jarrett, Kasey Kahne, Kenny Wallace, Jason Keller and Brad Keselowski. Ward’s lone XFINITY Series win came with Kahne behind the wheel in the 2003 series finale at Homestead-Miami (Fla.) Speedway.

Ward’s best finish across 11 XFINITY Series races atop the pit box at Chicago was a 14th-place finish with Brad Keselowski in 2007.