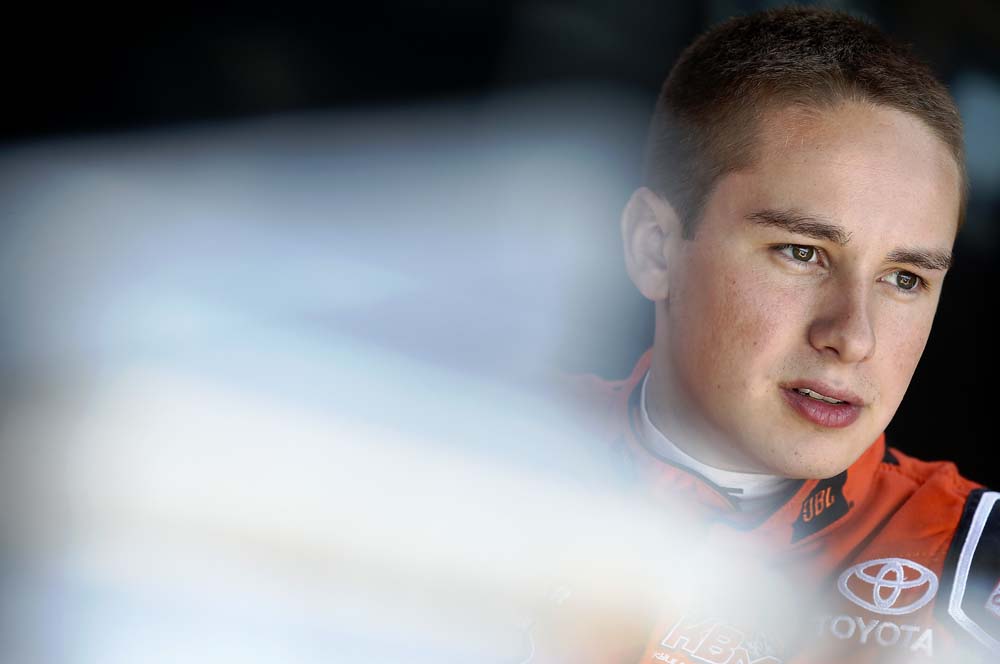 MOORESVILLE, N.C. (June 21, 2016) – Although Saturday’s Drivin’ for Linemen 200 will mark Christopher Bell’s first start at Gateway Motorsports Park in Madison, Ill., the talented youngster has raced on several dirt tracks within a short drive of the Gateway Arch and considers the Greater St. Louis area one of the special places he has traveled to along his racing journey.

One of the 21-year-old’s fondest moments in his budding career happened just 40 miles from Gateway at Federated Auto Parts Raceway at I-55 in Pevely, Mo., Bell battled side-by-side for several laps with sprint car legend Sammy Swindell in the middle stages of a World of Outlaws Sprint Car Series race and then pulled away late to capture his second career win in the series. His first career win in the World of Outlaws Sprint Car Series also came just 90 miles from Gateway at Jacksonville (Ill.) Speedway in May of 2014.

Bell has never turned a lap at Gateway, but he did attend last year’s race in advance of his Truck Series debut at Iowa Speedway to observe crew chief Jerry Baxter and the rest of the No. 51 team that would be working with him the following week. Baxter who now calls the shots for Bell on the No. 4 team, has a history of success at the Illinois track. The veteran signal caller was atop the pit box for Darrell Wallace Jr., in the 2014 Truck Series event at Gateway in which Wallace Jr. led a race-high 85 laps and ended the day in victory lane. The California native also earned a pair of third-place finishes in NASCAR XFINITY Series action at the 1.25-mile oval; in 2006 with David Reutimann and again in 2010 with Trevor Bayne.

With top-10 finishes in four of the last five races on the Truck Series schedule, Bell’s results have been trending in an upward arch. As they say in racing, if you continue to run up front, sooner or later you’re going to end up in that special place they call victory lane.

You went to watch and learn during last year’s race at Gateway, what do you remember about that day?
“It was really hot and muggy. Looking at the weather forecast it is going to be the exact same thing on Saturday. I’m going to have to make sure that going into this weekend I have a plan to keep my body hydrated. Jerry (Baxter, crew chief) had a really good truck with Matt Tifft driving last year — they were running in the top five before getting caught up in a crash. I know that Jerry also won there with Bubba (Darrell Wallace Jr.) in 2014, so I know that I’m going to have a good Tundra this weekend.”

Has your team told you how racing at Gateway will compare to racing at Martinsville?
“I’ve been told that Gateway races kind of like a big Martinsville with long straightaways and tight corners. Both sets of corners are different — one and two is a lot sharper than three and four — so that is something that I’m going to have to adjust to as a driver.”

The area around Gateway is a hot bed for dirt track racing, have you raced at any tracks near there?
“I’ve raced at a lot of dirt tracks that are 30 miles or less from Gateway, so it’s cool to be going back to that area and be running in the Truck Series. One of the favorite wins of my life was last year when I won a World of Outlaws Sprint Car Series race in Pevely, Missouri, so the area has a special place in my heart. Belle-Clair Speedway in Belleville, Ill., is another place that I really love and I’m actually going to go out there Friday night and watch some dirt racing.”

How does Gateway compare to some of the other flat tracks on the schedule?
“It is very similar to the other flat tracks on the Truck Series schedule. The corners are a little different on each end, but you have a lot of hard braking getting into both of them. It’ll be a new track for Christopher, but he’ll be able to carry over some of the things he learned at Martinsville earlier this season. After getting in a rhythm at Martinsville he was turning some pretty fast lap times and we were in position for a top-10 finish before he got caught up in a wreck late in the race. We’ve got a pretty good baseline setup for these flat tracks and a good notebook to work off of, so I’m confident that we’ll have another fast Tundra this weekend.”

KBM-25: The No. 4 Toyota Racing team will unload chassis KBM-25 for Saturday’s Drivin’ for Linemen 200 at Gateway Motorsports Park. The Tundra will be seeing action for the first time this season, but produced two top-five and three top-10 finishes across four starts in 2015.

The Book on Baxter:
Veteran crew chief Jerry Baxter is in his fourth season atop the pit box for KBM. Since joining KBM, Baxter’s drivers have posted seven wins, three poles, 1218 laps led, 26 top-five and 42 top-10 finishes across 73 starts. The California native spent the 2015 season calling the shots for KBM’s No. 51 team, which collected two wins, 10 top-five and 14 top-10 finishes with drivers Daniel Suarez (12 starts), Matt Tifft (six starts), Kyle Busch (three starts), and Christopher Bell (one start) behind the wheel. In addition to his seven wins at KBM, he boasts one other Truck Series win (Cale Gale, 2012) and one NASCAR XFINITY Series win (David Reutimann, 2007).

Baxter guided Darrell Wallace Jr., to victory in the 2014 Truck Series event at Gateway and also produced a pair of third-place finishes in the XFINITY Series (Trevor Bayne, 2010 and David Reutimann, 2006) at the Illinois track.