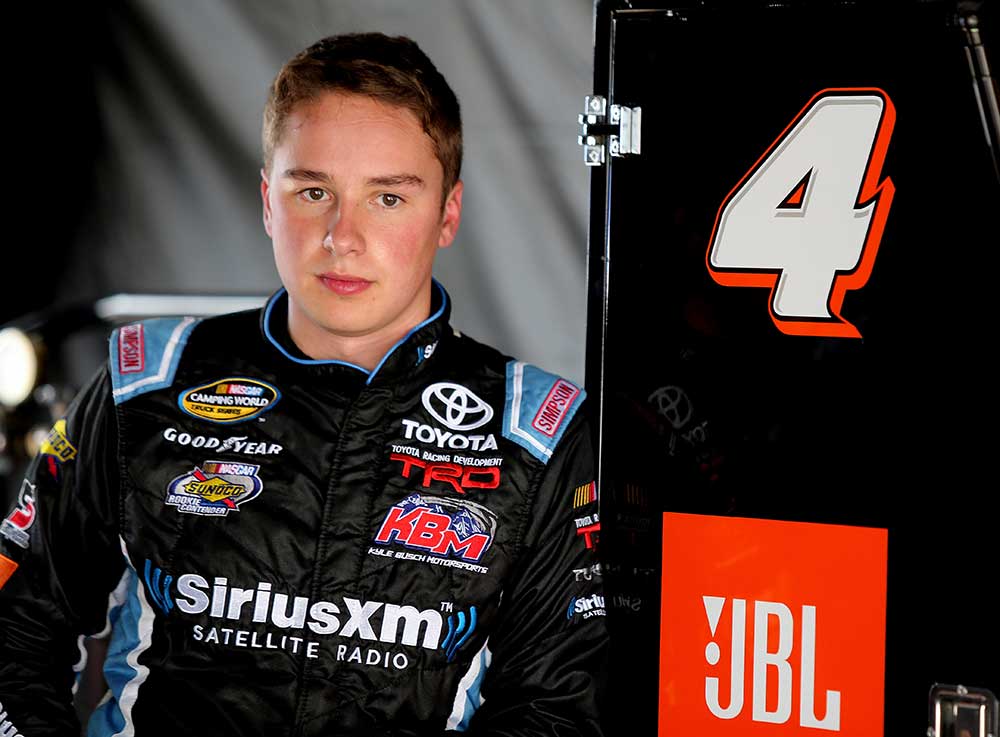 MOORESVILLE, N.C. (May 9, 2017) – Friday’s Toyota Tundra 250 will mark the end of five weeks off for the NASCAR Camping World Truck Series, but Christopher Bell is one driver who hasn’t let the break in the action slow him down. Bell stayed busy racing on dirt as well as preparing for his upcoming NASCAR XFINITY Series debut for Joe Gibbs Racing at Charlotte (N.C.) Motor Speedway on May 27.

Bell spent his first “off weekend” racing ASCS Sprint Cars in Tony Stewart’s Texas Sprint Car Nationals at the dirt track at Texas Motor Speedway on April 7 and 8. Participating in the event, which was held the same weekend as NASCAR’s top two series were racing at the pavement track around the corner, also allowed the 22-year-old to hang around the No. 18 XFINITY Series team and get a feel for the team he will be working with for his series debut. He traveled with and shadowed the team again for the XFINITY Series stop at Richmond (Va.) International Raceway on April 29.

The Oklahoma native returned to the state of Texas the following weekend to race in the World of Outlaws Sprint Car Series events at Gator Motorplex in Willis on April 13 and Devil’s Bowl Speedway in Mesquite, Texas April 14 and 15. Bell qualified inside the top five both nights and earned a respectable fourth-place finish in the final event of the weekend.

Bell’s next stop came on April 21 at the NRA Sprint Invaders event at Limaland Motorsports Park in Lima, Ohio. The talented wheelman maneuvered his way from the 14th starting position up to third in 10 laps, took the lead on lap 18 and then cruised to victory in the 25-lap feature. The following night he finished sixth in the All Star Circuit of Champions Sprint Car race at Wayne County Speedway in Orrville, Ohio.

Last week Bell cleaned the dust of his racing shoes and returned to the pavement participating in the open test at Charlotte Motor Speedway. He kicked off the day turning his first laps in an XFINITY Series Camry from 8 a.m. – 3 p.m. and then headed over to the Truck Series garage for the 3 – 8 p.m. session.

Bell proved that he’s a serious racer the last five weeks traveling the country with his helmet and firesuit in hand looking for a seat to keep his skills sharp during the break. Friday night he gets behind the wheel of the same Tundra, KBM-38, that he dominated the first mile-and-a-half race of the Truck Series season at Atlanta (Ga.) Motor Speedway looking to earn another victory and prove that he’s a serious contender for the championship again this year.

You finished fourth at Kansas last year. Are you looking forward to going back this year?

“Looking back at last year Kansas was one of my favorite races, so I’m excited to go back there and compete for a win. After being so fast earlier this year at Atlanta, I can’t wait to get to Kansas and race another mile-and-a-half track. Kyle Busch Motorsports has been strong at Kansas – William (Byron) won this race last year and I had a really good run as well. Kansas always provides extremely intense restarts because there is a lot of area that you can use going into Turns 1 and 2. The restarts are tough there, so I’m going to have to be on top of my game for every restart to try and minimize mistakes and maximize opportunities. With the race being the Toyota Tundra 250 there is definitely more incentive for us to get our SiriusXM Tundra to victory lane and make sure a Toyota wins.”

Was it beneficial to participate in the open test at Charlotte last week?

“Going to Charlotte last week for the open test was a good way to shake off the rust since we haven’t raced at a mile-and-a-half track since Atlanta. It was good for the guys to get back to the race track and good for me to get back in the seat of my Tundra. We were able to learn some things that we will be apply to the Charlotte race next week, but also things that we can use for Kansas as well.”

What have you been doing to keep busy during the break in action on the Truck Series schedule?

“I’ve been doing a lot of sprint car racing and trying to stay busy. I feel like staying in the seat of something is really important. I’ve still been racing and I’ve also been keeping up with the NASCAR side of things too and making sure I keep the mindset of pavement racing while I’m dirt racing. I went and shadowed Joe Gibbs Racing’s XFINITY Series teams at both Texas and Richmond, so although I haven’t raced on pavement, I have been to the track a couple times. I also got the chance to make my first laps in an XFINITY car at the open test at Charlotte at get some extra laps on a mile-and-a-half track.”

Rudy Fugle, crew chief of the No. 4 NCWTS SiriusXM Tundra:

After a long break in the action are you ready to get back to racing?

“Kansas is our style of race track — it’s fast but you still have to handle really well, have a good aero package and good engines. Those types of tracks are where we really seem to excel. This stretch of races coming up in May and June are all at tracks that we have been really successful at in the past and the break in the action since Martinsville has allowed us to get a fleet of quality trucks built up. We’re looking forward to getting this next stretch of races off to a strong start at Kansas on Friday.”

KBM-38: The No. 4 SiriusXM Racing team will unload KBM-38 for Friday night’s Toyota Tundra 250 at Kansas Speedway in Kansas City. It is the same Tundra that Bell captured the pole and led 99 of 130 laps with en route to victory earlier this season at Atlanta Motor Speedway in Hampton, Ga. William Byron also won from the pole with the truck in the 2016 Truck Series finale at Homestead-Miami (Fla.) Speedway.