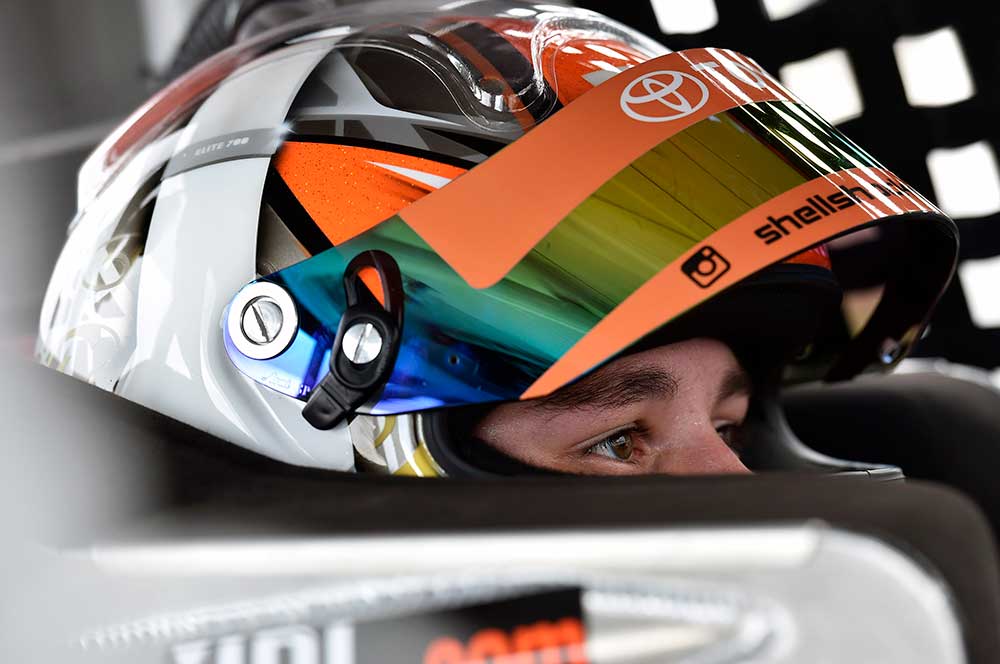 MOORESVILLE, N.C. (July 26, 2016) – Christopher Bell has overcome the disappointing finishes that put him in a hole in the NASCAR Camping World Truck Series point standings after the first three races of the season to emerge as a championship contender. Bell enters the Pocono Mountains 150 at Pocono Raceway in Long Pond, Pa., having finished inside the top five in five of his last eight NASCAR Camping World Truck Series starts and has catapulted from 21st in the point standings after week three to sixth entering Saturday’s race.

Since a hiccup at Texas Motor Speedway in Fort Worth in June, where he missed a shift at the start of the race and finished last, Bell has responded by recording an average finish of 4.0 over his last four starts, including his win at Gateway Motorsports Park in Madison, Ill., on June 25. His 120 championship points scored over the last four races are more than any other driver in the Truck Series, including his Kyle Busch Motorsports’ (KBM) teammate William Byron who has won two of the last four races and has scored the second most points (111) during that span. With his Gateway win, the Oklahoma native currently sits fourth on the eight-driver grid for the inaugural Truck Series Chase with five races remaining until the playoffs begin.

This weekend will be Bell’s first trip to the “Tricky Triangle,” so to help speed up his learning curve the 21-year-old driver will be pulling double duty as he will make his third ARCA Racing Series start of the season for Venturini Motorsports. The talented wheelman led 91 of 200 laps and scored a victory at Salem (Ind.) Speedway in his first career ARCA start in April. He also led seven laps and posted a 10th-place finish on the road course at New Jersey Motorsports Park in Millville in May.

In addition to getting extra seat time at the 2.5-mile tri-oval through running the ARCA race, Bell will be under the guidance of Jerry Baxter, who was the winning crew chief in last year’s Truck Series race at Pocono. With Baxter’s setup and strategy, KBM owner-driver Kyle Busch led 53 of the 69 laps en route to a dominant victory in last year’s event. The win was Busch’s first-ever win in any series at the Pennsylvania track and also the first for KBM.

Saturday’s 60-lap event will be the first of four races for SiriusXM, the world’s largest radio company, as the primary sponsor of Bell’s No. 4 Tundra. The talented wheelman will be looking to continue his streak of strong performances as he continues to prove to be a ‘Sirius’ contender not only for the win each week, but for this year’s Truck Series Championship.

Do you feel that your strong performances in recent weeks make you a championship contender?
“I feel like we are a strong contender, but I also feel that we need to continue to make strides and get even better. We have been a lot more consistent and as we move forward we have a good benchmark of where we need to be with having the points leader in our shop with William (Byron) and the nine team. I feel like we haven’t quite caught up to them, but we are getting much closer. Since Iowa, I’ve been working really hard with Jerry (Baxter, crew chief) to improve our communication. I’ve been trying to give better feedback to Jerry so that he can understand where I need help in order to make our Tundras go faster. As my relationship with Jerry continues to get better, I’m confident that we will keep improving and we’ll be at our best when the Chase comes around.”

Are you excited to have SiriusXM on your No. 4 Tundra this weekend?
“As I’ve said about JBL all year, it’s really cool to have sponsors that you can easily relate to. Outside of racing, one of the things I really enjoy is listening to music — so JBL and SiriusXM are perfect partners for me. When I travel to dirt-track races or the Super Late Model races for KBM, you’re in the car for upwards of eight hours and good music helps make the trip go faster. I’m from Oklahoma and enjoy country music, so on those long drives you can usually find me tuned into the Highway on channel 56. Earlier this season I realized the importance of fitness and I’ve become friends with the treadmill and need something a little more upbeat to listen to while I’m working out, so I usually listen to KIIS on channel 11 or Z100 on channel 12 on the SiriusXM app through my JBL Reflect Mini in-ear headphones.”

Where has your team improved the most since the start of the season?
“Christopher has really matured as a driver since the beginning of the season and hasn’t torn up as much equipment — other than Eldora which pretty much everyone did. He and I have worked really hard to improve our communication and we definitely have a better understanding of each other than we did early in the season. He’s doing a much better job of breaking things down with his feedback during practice and during the race, which allows me to do a better job with making adjustments.”

Will you unload with a similar setup this weekend to what you won with last year with Kyle?
“We are going to unload with the same setup as we had for the race last year with Kyle. Erik Jones and the No. 4 team from last year had went and tested Pocono before last year’s race and that allowed all three of our teams to go to the race with a pretty good setup. Erik sat on the pole, Kyle won the race and they were both really fast. So with Christopher have never been there before, it should be pretty comforting to know that he is going to unload with what should be a fast Tundra.”

KBM-32: The No. 4 SiriusXM Racing team will unload KBM-32 for Saturday’s Pocono Mountains 150 at Pocono Raceway in Long Pond, Pa. Bell picked up a fourth-place finish with the Tundra in its debut at Kansas Speedway in Kansas City in May.

The Book on Baxter:
Veteran crew chief Jerry Baxter is in his fourth season atop the pit box for KBM. Since joining KBM, Baxter’s drivers have posted eight wins, three poles, 1218 laps led, 29 top-five and 46 top-10 finishes across 77 starts. The California native spent the 2015 season calling the shots for KBM’s No. 51 team, which collected two wins, 10 top-five and 14 top-10 finishes with drivers Daniel Suarez (12 starts), Matt Tifft (six starts), Kyle Busch (three starts), and Christopher Bell (one start) behind the wheel. In addition to his eight wins at KBM, he boasts one other Truck Series win (Cale Gale, 2012) and one NASCAR XFINITY Series win (David Reutimann, 2007).

Baxter called the shots for Busch’s dominant victory at The Tricky Triangle last year. His drivers have combined to record one win, one top-five and three top-10 finishes resulting in an average finish of 7.5 across four starts in the Keystone State.