A Place of Firsts 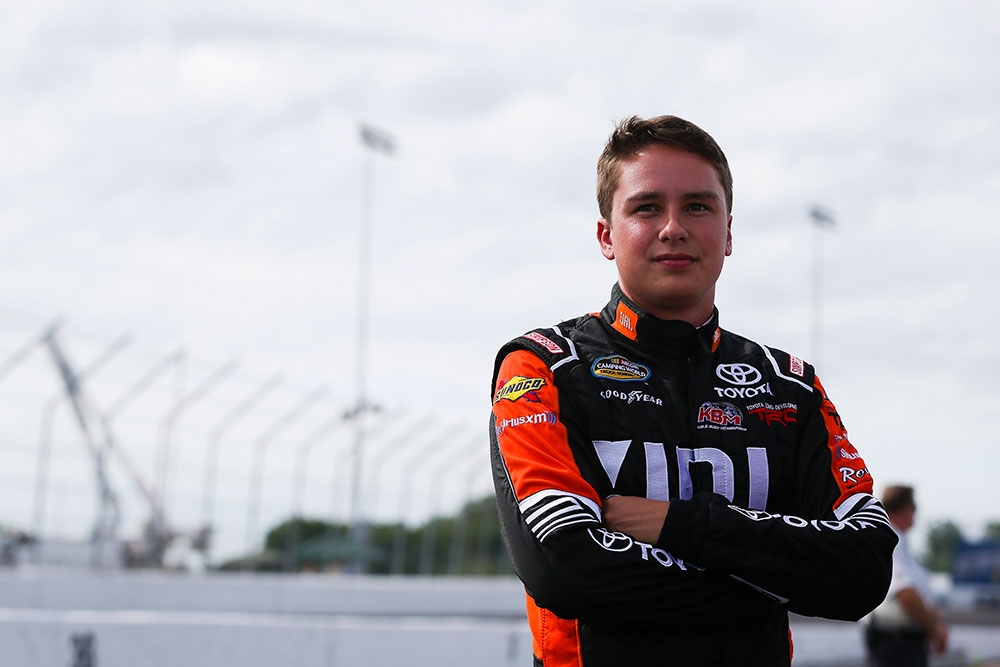 MOORESVILLE, N.C. (June 20, 2017) – Christopher Bell heads to Iowa Speedway in Newton, the track where he finished fifth in his NASCAR Camping World Truck Series (NCWTS) debut in June of 2015. This weekend will be another first for Bell, as he pulls double duty for the first time in his career as he is set to wheel the No. 4 Toyota Tundra for Kyle Busch Motorsports (KBM) in the NCWTS M&M’s 200 on Friday night and then gets behind the wheel of the No. 20 ToyotaCare Camry Saturday night for his second career NASCAR XFINITY Series start for Joe Gibbs Racing.

Bell has gotten off to a hot start in his second full-time season in the Truck Series. The 22-year-old wheelman leads the series in wins (two), poles (three), playoff points earned (13), driver rating (114.8), laps led (339) and fastest laps run (160). The Oklahoma native is also tied with reigning Truck Series champion and current points leader Johnny Sauter with seven top-10 finishes. Outside of an accident that ended his day early at Dover (Del.) International Speedway, Bell has run up front, led laps and been in a position to win in the other seven events completed this season.

Now the No. 4 team heads to Iowa Speedway, a track where KBM currently holds a three-race winning streak, including the last two with Bell’s crew chief, Rudy Fugle, calling the shots. Erik Jones led a race-high 112 laps en route to victory in the 2015 event and William Byron visited victory lane last year after leading a race-high 107 laps. Fugle also had an influence in KBM’s 2014 win at the 0.875-mile oval, when he was the race engineer under crew chief Eric Phillips when Jones led a race-high 131 laps and ended the night in victory lane.

Iowa has certainly been a place of firsts for both Bell and KBM. Bell will now take aim at harvesting a pair of first-place finishes in the Hawkeye State as he tries to earn his first weekend sweep in NASCAR.

Are you looking forward to your first shot at doing double duty this weekend at Iowa?

“I’m looking forward to an exciting weekend at Iowa, it is the track where I made my Truck Series debut and had a good run that day. Last year I felt like we struggled a little bit, so I’m looking forward to going back with Rudy (Fugle, crew chief) and hopefully we’ll be able to keep his winning streak alive. He’s been the winning crew chief the last two years and was the engineer for Erik (Jones) when he won in 2014, so he knows how to prepare a really fast Tundra for Iowa. We’ve been really good everywhere we’ve raced this year and I expect that we will be able to continue that trend this weekend. We weren’t quite as fast as we wanted to be at Gateway last week, but at the end of the day we still had a chance at the victory so that was encouraging. I’ll be getting a lot of extra track time by running both the truck and the XFINIY car, which I think will help me in both series. Friday is going to be a long day with four practice sessions, qualifying and the Truck Series race, so I’ll have to make sure I start working on staying hydrated this week before we get to the track.”

Rudy Fugle, crew chief of the No. 4 NCWTS Toyota Tundra:

Your drivers have won the last two Truck Series events at Iowa. What does it take to be successful there?

“Iowa is a short track, but it races like a mile-and-a-half, so you have to have a fast truck but you also have to have a really good short-track package — it needs to turn well and have a lot of rear grip. One of the biggest things at Iowa is you usually have to run a long way on tires and the tires wear a decent amount, so you have to have a truck that is consistent over a long run. I think that is one of the things that we do really well there, our trucks have good long-run speed and hopefully we will be able to accomplish that again Friday night.”

KBM-28: The No. 4 Toyota Tundra team will unload KBM-24 for Friday night’s M&M’s 200 at Iowa Speedway. It is the same Tundra that Erik Jones lead a race-high 112 laps with en route to victory at the 0.875-mile oval in the 2015 event. Friday’s 200-lap race will be the first time that the Toyota has seen race action this season.

Ryan “Rudy” Fugle begins his fourth season as a crew chief at KBM and sixth overall with the organization.  The New York native has guided his team to an Owner’s championship in all three of his seasons (2013, 2015 & 2016) atop the pit box at KBM, including a combined Owner’s/Driver’s Championship with Erik Jones in 2015. His drivers have combined for 18 wins, 12 poles and 38 top-five finishes across his 76 races calling the shots for the organization. Under his tutelage last season, William Byron collected a Truck Series’ rookie record seven wins while leading the No. 9 Tundra team to KBM’s fourth consecutive and fifth overall Owner’s championship.

Fugle’s NCWTS drivers have posted two wins, one pole, three top-five and four top-10 finishes resulting in an average finish of 3.2 across four starts. Erik Jones led a race-high 112 laps en route to victory at Iowa in 2015 and William Byron made it back-to-back wins leading a race-high 107 laps in last year’s event. Fugle was also the race engineer for Jones’ victory in the 2014 event.