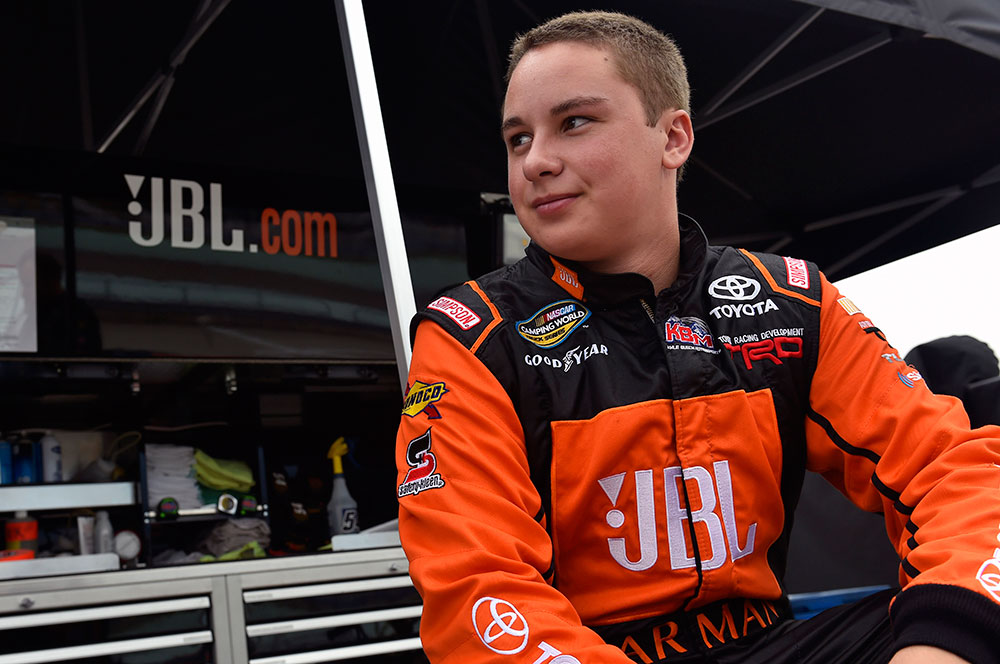 MOORESVILLE, N.C. (Feb. 16, 2016) – Open-wheel dirt standout Christopher Bell continues his transition to pavement in 2016 as he begins his first full-time season in NASCAR, driving the No. 4 JBL Tundra for Kyle Busch Motorsports (KBM) in the Camping World Truck Series. Bell hopes that his learning curve will be accelerated from the lessons he learned in his seven-race Truck Series schedule last season and that when the dust settles on the 2016 season, KBM’s No. 4 Tundra will once again be the cream of the crop.

Bell’s racing teeth were cut on dirt in micro sprints in his home state of Oklahoma when he was six years old. He graduated to 360 and 410 Sprints and proved that he was serious about a career in racing by moving to Ohio in 2011 to run 410 Sprint Cars.  The following season he returned to Oklahoma to run 360 Sprint Cars in Texas and Arkansas and put his name on the map with a runner-up finish in the Short Track Nationals at I-30 Speedway in Little Rock, Ark.

Kyle Larson’s move to NASCAR in 2013 opened the door for Bell to join Midget powerhouse Keith Kunz Motorsports (KKM). In his first season at KKM, Bell scored six Midget wins and an additional seven podium finishes en route to the USASC Midget championship. All together in 2013, he scored 18 wins between Non Winged, Midgets, 360 Sprint Cars and 410 Sprint Cars.

In 2014, Bell continued his winning ways and found victory lane in a variety of disciplines across a 108-race schedule. He posted 18 wins in Midgets, seven in Winged Sprint Cars, including his first career World of Outlaws Sprint Car Series win, and also won a Non-Winged Sprint Car race. In October of that year, he began his transition to pavement running Late Models for KBM. In just his fourth career Late Model start, the talented wheelman outdueled second-generation NASCAR driver John Hunter Nemechek to win the Orange County 150 Pro All Star Series South Super Late Model race at Orange County Speedway in Rougemont, N.C.

Last year, Bell split time between dirt and pavement. On dirt, he collected his second career World of Outlaws Sprint Car victory, won six times in the POWRi Midget Series, twice in USAC National Midgets and once in the USAC Silver Crown Series. On pavement, he picked up his first marquee Super Late Model victory winning the prestigious Rattler 250 at South Alabama Speedway in Kinston and collected five other Super Late Model triumphs. He then moved up the ladder with two starts in the NASCAR K&N Pro Series West, including a fifth-place overall finish in the combination race at Iowa Speedway in Newton.

The Oklahoma native progressed to the Truck Series and finished fifth in his series debut at Iowa Speedway in June. Then, in just his third career start he led 106 laps en route to his first NASCAR National Series victory. All together in seven Truck Series starts last year, he posted one win, 111 laps led, two top-five and three top-10 finishes.

Bell’s journey down a dirt road has led him to Daytona, where he’ll tackle the 2.5-mile tri-oval for the first time in Friday night’s NextEra Energy 250. The 21-year-old has already proven that he can win in any type of vehicle on any type of track, now he aims for a victory at “The World Center of Racing” and the first birth into the inaugural Truck Series Chase.

What does it mean for a kid that grew up racing on small dirt tracks to be making your first start at Daytona?

“Racing at Daytona is something that every kid dreams about and it’s going to be awesome to race somewhere so prestigious. I remember being in Florida for Sprint Car races and driving by Daytona and wondering if I’d ever get the chance to race there. The opportunity came about a lot quicker than I expected and I’m thankful to Toyota, Kyle Busch Motorsports and JBL for believing in me and making my dream become a reality.”

Have you set any goals for this season?

“I believe that we can go out and win races and compete for the Truck Series championship. I feel like the seven races I ran last year were a great opportunity for me to get my feet wet and I was able to gain experience at a variety of race tracks. I know that I still have a lot to learn and there will obviously be a learning curve. I’m really excited to work with Jerry (Baxter, crew chief) and all the guys on this No. 4 JBL Tundra team. We all have the same mentality and that is to go out and try to win every race.”

Kyle Busch, owner of the No. 4 JBL Toyota Tundra:

What is your outlook for Christopher Bell this season?

“Christopher did a really good job for us last season with his limited schedule and we are looking forward to seeing what he can do now that he will be running full-time. He was able to get a win in just his third Truck Series race last year on the dirt at Eldora and did a nice job at the mile-and-a-half tracks as well. He showed good speed and good poise behind the wheel. At Talladega last year, he ran a really strong race for it being his first time on a superspeedway and was in position for a good finish but unfortunately the rules kind of bit him. With a superspeedway race under his belt now, we look for him to be up front again at Daytona and get the season off to a strong start.”

KBM-11: The No. 4 JBL Tundra team will unload KBM-11 for the NextEra 250 at Daytona (Fla.) International Speedway.  Daniel Suarez piloted the same Tundra to a ninth-place finish in last year’s season-opening race for the Truck Series at Daytona after starting from the 30th position.

Baxter’s Truck Series drivers have posted one top-10 finish and an average result of 19.8 across four starts at Daytona.