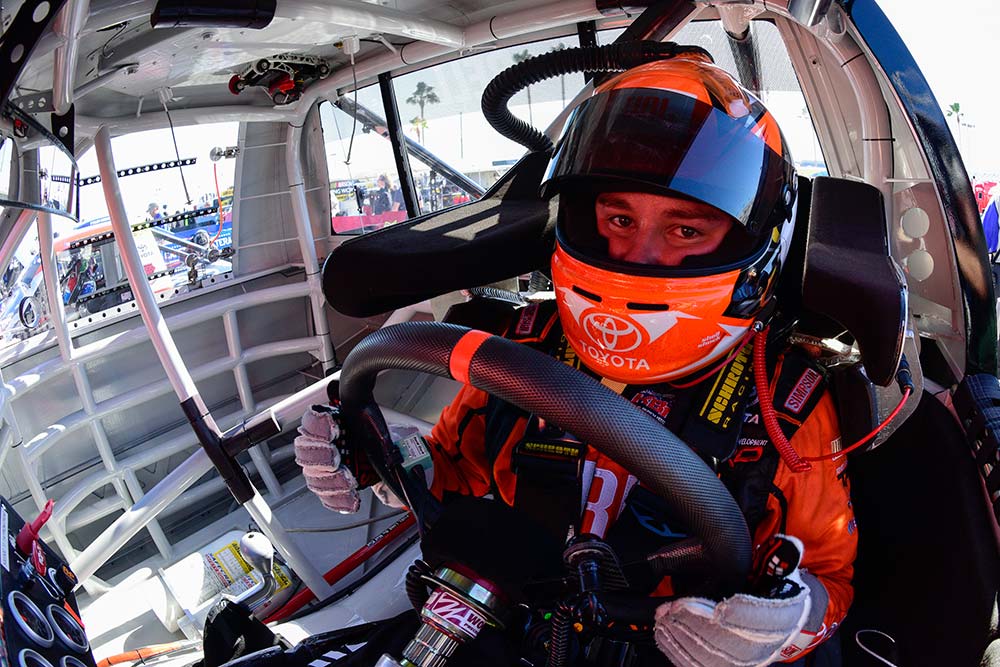 MOORESVILLE, N.C. (Feb. 23, 2016) – Christopher Bell and his No. 4 JBL Tundra team are ready to shake off a rough finish to last week’s season-opening event at Daytona (Fla.) International Speedway and get things turned in the right direction in Saturday’s Great Clips 200 at Atlanta Motor Speedway in Hampton, Ga.

Bell along with his Kyle Busch Motorsports (KBM) teammates, William Byron and Cody Coughlin, traveled to Atlanta for a two-day rookie test the first week of February. Crew chief Jerry Baxter estimated that his team logged over 400 miles on the 1.54-mile Quad-oval, which allowed his young driver to get accustomed to a variety of setups and experiment driving a variety of lines around the challenging track. It was also an opportunity for the 21-year-old driver to get acclimated with Baxter and the rest of the No. 4 JBL crew after working with the No. 54 crew for six of his seven races last season.

The team will be unloading a Tundra that is a proven winner for this weekend’s event in Georgia. KBM-29 has visited victory lane twice in four career starts and has never finished outside the top 10. Owner-driver Kyle Busch led 53 of 69 laps en route to victory with the Toyota in his 2015 Truck Series debut at Pocono (Pa.) Raceway and followed it up in the series’ next stop by leading 44 of 100 laps and ending in victory lane at Michigan International Speedway in Brooklyn.

Across its first six seasons in the NASCAR Camping World Truck Series, KBM tallied 45 wins and four Owner’s championships. One thing they were not able to accomplish is finding victory lane at Atlanta. The 1.54-mile Quad Oval is the lone circuit on the current schedule, which consists of 21 different tracks, that the premiere team in NASCAR’s third division has yet to conquer. Busch came close for his team twice, posting runner-up finishes in the 2010 and 2012 events, and overall the team has recorded an average finish of 8.5 across eight starts, but victory has eluded them.

With lessons learned from a recent two-day test in the Peach State in his memory bank and a Tundra with a winning history underneath him, Bell is ready to ring up KBM’s first Atlanta win on Saturday.

What were you able to take away from the Atlanta test that you can apply to the race this weekend?

“The track time will be really valuable because compared to the mile-and-a-half tracks that I raced at last year Atlanta seems like a very unique place. Texas relates to it a little bit, but nothing beats that seat time I was able to get at our two-day test. I feel that over the course of the test we were able to learn a lot of things that will help make us stronger for the race Saturday.”

What is unique about Atlanta?

“What makes it unique is that it is very line sensitive. From studying the film of last year’s races, Kevin Harvick in the Xfinity Series race and Matt Crafton in the Truck Series race proved that if you can be precise with your line and make sure that you can hug the yellow line at the bottom you will be really good. Being precise with your line is something that you have to do to be successful in the dirt world, so I feel like it should translate well for me at Atlanta this weekend.”

Compared to the other mile-and-a-half tracks that you’ve raced on, do you feel that tire wear will be more of an issue this weekend at Atlanta?

“Yes, Atlanta is definitely known for beating up the tires. Taking care of your tires throughout a run is really important. I’ve gotten a lot of experience behind the wheel of KBM’s Late Models the last few years and in the longer races you really have to manage your tires. So, I feel like I’ll be able to apply what I’ve learned there and we can have something for them at the end of the truck race Saturday. Obviously the race didn’t end how we had hoped last weekend, so I’d like nothing more than to bounce back this weekend and put our JBL Tundra in victory lane.”

Jerry Baxter, crew chief of the No. 4 JBL Toyota Tundra:

How will having participated in a rookie test at Atlanta earlier this month benefit Christopher?

“It’s still early in Christopher’s transition to pavement racing and the mile-and-a-half tracks are the toughest part of that transition with how the aerodynamics come into play — especially in the Truck Series. Every lap that we can get for him is huge as he continues in his development. I think we did a little over 400 miles at the test and he was able to see what it feels like to run all the different lines — he made some laps on top, the middle and the bottom. He was able to get a lot of experience and we should have a pretty good baseline setup for when we get on track Friday.”

KBM-29: The No. 4 JBL team will unload KBM-29 for Saturday afternoon’s Great Clips 200 at Atlanta Motor Speedway. The Tundra picked up two wins, both with owner-driver Kyle Busch, in four starts last season and has never finished outside of the top 10.