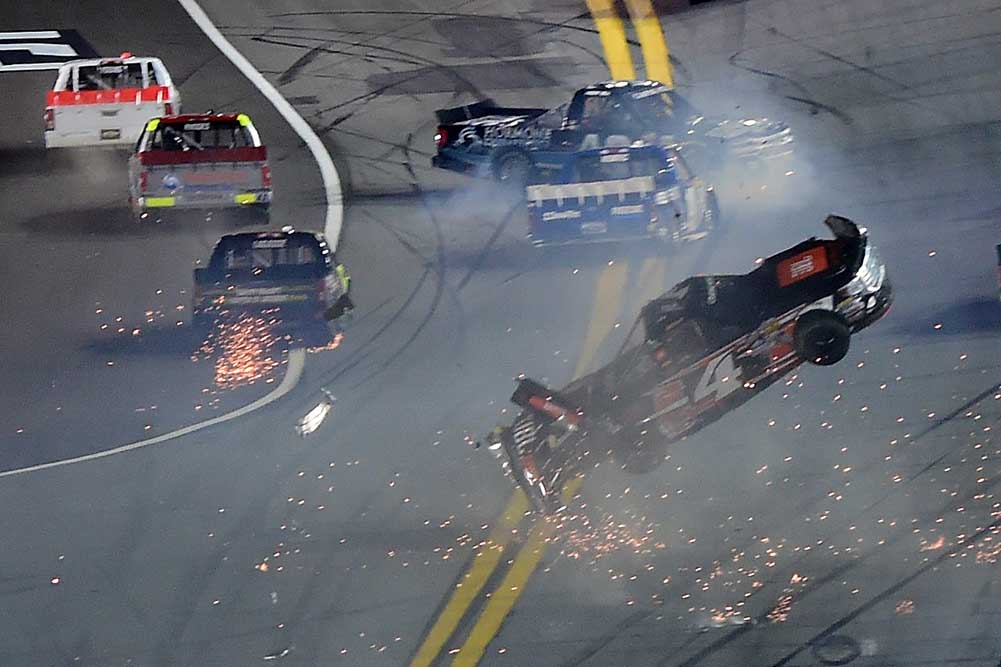 As a young open-wheel dirt racer, Christopher Bell passed by Daytona (Fla.) International Speedway several times while in Florida for Sprint Car races and always dreamed of one day getting the chance to compete at the “World Center of Racing.” Bell made his debut at the 2.5-mile tri-oval in Friday’s NASCAR Camping World Truck Series NextEra Energy Resources 250 and it is one that the talented wheelman will probably never forget. Bell’s night included running as high as second, suffering damage to his JBL Tundra in a freak accident entering pit road, making a miraculous save on the apron after getting turned from behind, being in the mix for the win on the final lap and ultimately finishing the race by flipping and tumbling end over end down the frontstretch and coming to rest on all four wheels.

Bell walked away from the vicious crash with a 16th-place finish after the race ended under NASCAR’s new overtime rules. After the race he was transported from the infield care center at Daytona to a nearby hospital for precautionary reasons and was evaluated and released early Saturday morning. 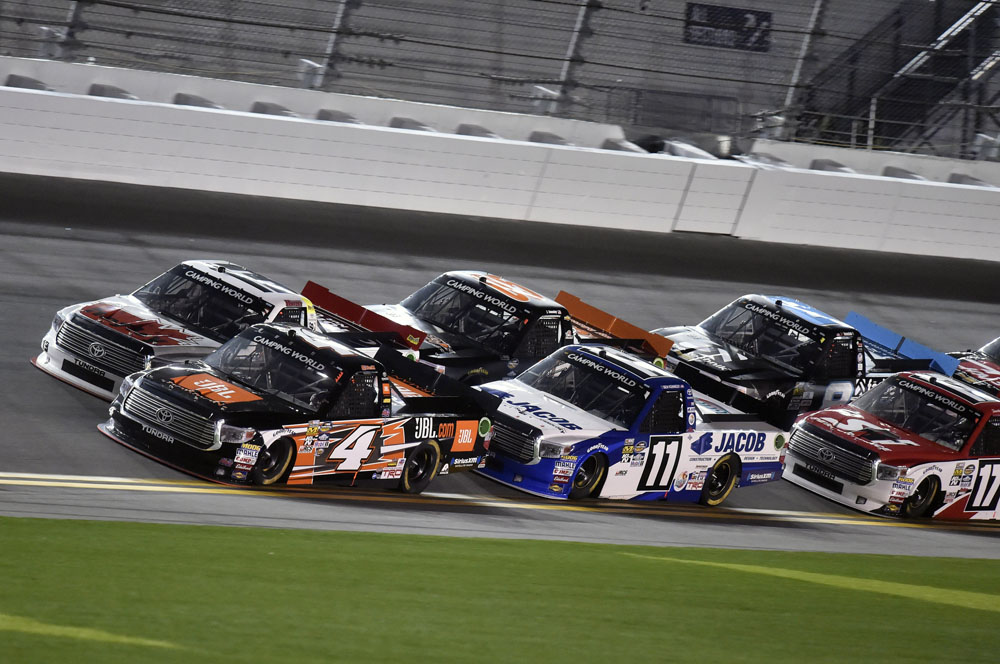 The Oklahoma native started the race from the eighth position, but by the completion of lap one was already in the top five. A one-truck accident slowed the field for the second time on lap 13 and crew Jerry Baxter summoned his rookie driver to pit road for a fuel-only stop. The No. 4 JBL Tundra returned to the track scored in the eighth position for the lap-16 restart.

Bell tucked in behind fellow Toyota competitor and two-time series champion Matt Crafton and the two maneuvered their way up the outside lane to front of the pack. The Kyle Busch Motorsports (KBM) driver was running in the third position as time was winding down on NASCAR’s newly-implemented caution clock. With 15 seconds remaining on the clock as the field came off Turn 4 on lap 41, Baxter elected to bring his rookie driver to pit road. Several other trucks were on the same strategy, but an accordion effect happened causing contact between Bell’s teammate Cody Coughlin and Spencer Gallagher.

Coughlin got hit from behind and slammed into the rear of Gallagher sending him towards the inside wall before pit road. Although Bell was five cars ahead of the incident, as he slowed down to make pit road speed, Gallagher overcorrected to avoid the wall and slammed into the left rear quarter panel of Bell’s Toyota. After doing a 360 spin, Bell was able to continue down pit road and back onto the race track as the caution flew.

Wanting to have ample time to repair the damage, Baxter summoned his driver to pit road before it was officially open. After multiple visits, Bell returned to the track with four fresh tires, a full tank of fuel and a repaired JBL Tundra and was scored in the 23rd position for the ensuing restart on lap 48.

Three laps later he had vaulted up to 11th, but his progress was impeded when he got turned from behind and his truck made an abrupt turn to the apron. The Oklahoma native summoned his inner dirt racer and made a miraculous save. He avoided contact with his competitors and darted back on to the track scored in the 17th position.

A debris caution slowed the field for the fourth time on lap 67. The Rookie of the Year candidate reported that his Toyota was a “little loose on entry” before visiting pit road when it opened. The over-the-wall crew administered a trackbar adjustment and filled the JBL Tundra with fuel and returned their driver to the track scored in the 10th position for the lap-70 restart.

With less than 20 laps remaining, Bell was scored in the 10th position as he contemplated ways to make a move toward the front of the field with his crew chief, spotter and team owner. Crafton and KBM driver Daniel Suarez had a strong run going on the outer groove and Bell was instructed to move up in front of them. The move turned out to be counterproductive and with 15 laps remaining the No. 4 Tundra settled in at the back of the pack in 16th position.

Slowly but surely as other drivers got impatient, Bell poked and gauged his way back into the top 10 holding his position securely in the middle lane. With eight laps remaining, the fourth and fifth-place trucks banged together and the reaction caused the first “big one” of the night. The No. 4 JBL Tundra bumper cared its way through the middle and escaped from the 18-truck accident in the fourth position for the final restart with two laps remaining.

Bell bump drafted Johnny Sauter on the outside lane as the field took the white flag with KBM teammate William Byron tucked in behind him. As he pushed Sauter far enough in front to clear the inside lane, his JBL Tundra turned down into the inside lane making contact with Timothy Peters and Ryan Truex and then turned head first into the outside wall. As he hit the wall Byron’s Tundra hit the rear end of his truck and turned him upside down. After double-digit flips end over end, the No. 4 Toyota came to rest on all four wheels at the entrance of Turn 1 as the race ended under caution per NASCAR new overtime rule. The 21-year-old quickly made his way out of his Tundra and walked away to the aid of the track safety crew.

Sauter collected his second Truck Series win at Daytona and his 11th career victory in NASCAR’s third division. Truex came home in the runner-up position and Parker Kligerman was third. Brandon Brown and Travis Kvapil rounded out the top-five finishers. William Byron posted a 13th-place finish and was the front runner among the four KBM drivers. Daniel Suarez and Cody Coughlin both ended their nights in the garage and finished 28th and 31st, respectively.

The opening race of the 2016 season featured seven cautions for a total of 29 laps. There were 26 lead changes among 10 drivers.

Bell, who leaves Daytona 14th in the point standings, will be back behind the wheel of the No. 4 JBL Tundra when the Truck Series resumes action Feb. 27 at Atlanta Motor Speedway in Hampton, Ga. Live coverage of the 130-lap event begins with the NCWTS Setup Show at 7:30 p.m. ET.