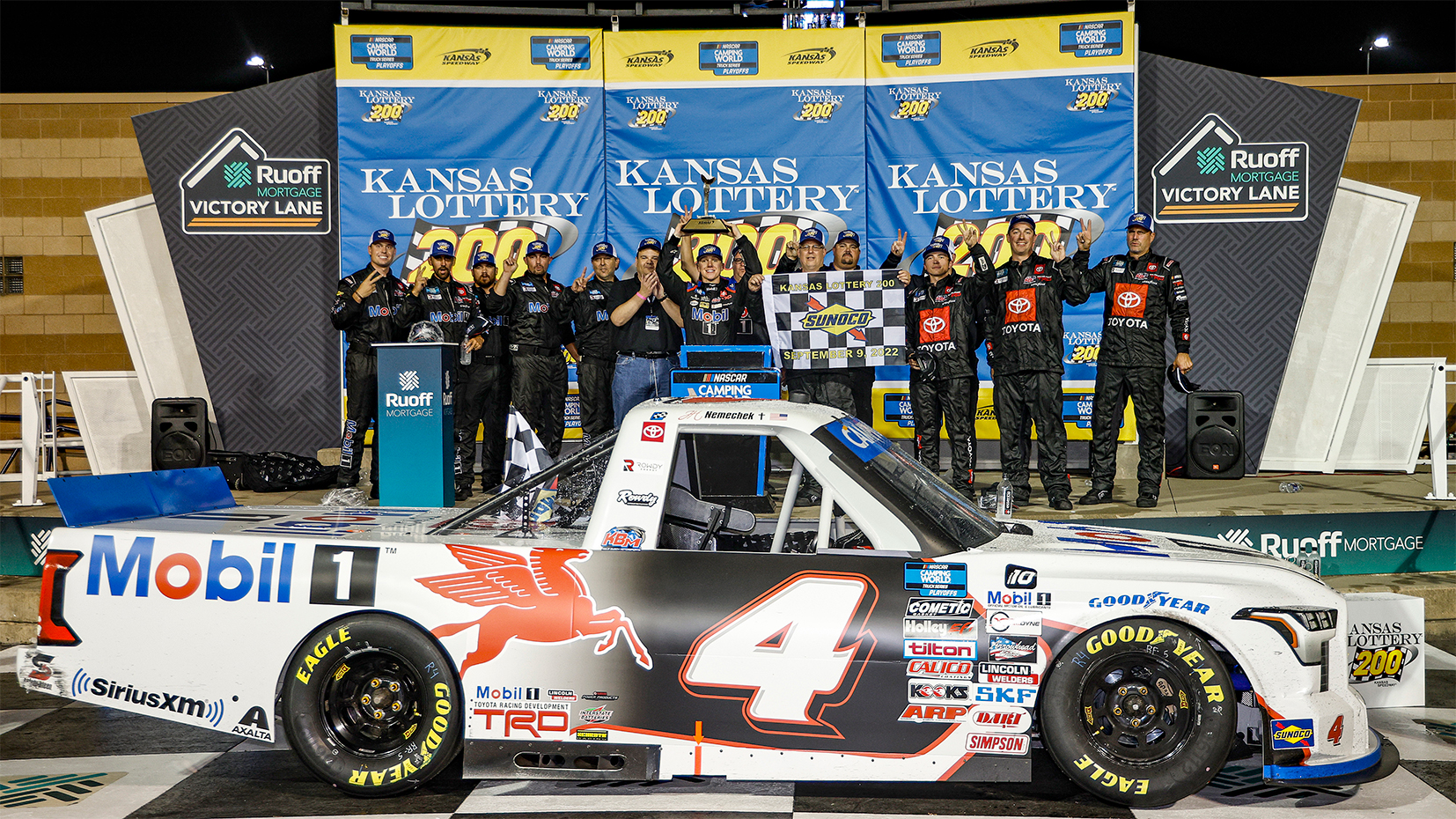 After earning his sixth pole award of the season and dominating the opening two stages of the Kansas Lottery 200, John Hunter Nemechek found himself over 20 seconds back of Carson Hocevar with 31 laps remaining due to differing pit strategies. Over the course of the final 31 laps, Nemechek chased down Hocevar and regained the lead on the last lap of the race to pick up his 13th career Truck Series win in dramatic fashion.

Nemechek earned an additional seven playoff points throughout the race Friday night that will carry over with him to the next round of the playoffs. When the playoff standings reset for the Round of 8, the second-generation driver will be third on the playoff grid, 11 points above the cutoff line to advance to the Championship 4.

What does this win say about your team moving into the next round of the Playoffs?

“It’s huge. I just want to say thank you to our entire team here, just everyone. I can’t thank them enough for the truck that they gave me tonight. This Tundra TRD Pro was absolutely on rails. Qualified on the pole, led a ton of laps, won both stages and won the race. We came in here really good points wise, and it flips over and was able to get some more Playoff points going into the next round. Puts us in a good spot and gives us some momentum moving into Bristol. I think this one is even sweeter. It’s been a really tough week for myself mentally, emotionally and things that you can’t control, but it feels good to come out here and cap it off with a win and show who I am.”

How strategic were you in the closing laps to get the win on the final lap?

“I got nervous there for a couple laps actually with all the lapped traffic in front of me and I kept dirtying myself with the dirty air. I had to play it smarter, and I didn’t play it smart there for a couple laps. I got myself a little bit behind but had huge speed and got a huge run off turn four. I knew that the 42 (Carson Hocevar) was saving fuel too and trying to block there. Just proud of all my guys, proud to get back to victory lane for the second time this year. We’re a little behind from last year. But I said I would rather win five races in the Playoffs and win a championship than win five races in the regular season and we’re going to try to do that.”

What was going through your mind on that final run?

“I knew we were fast. I didn’t know if we were going to be good enough to catch him, but I knew that we were fast. I’m proud of all my guys at KBM, they’ve been working their butts off. I feel like we’re finally peaking at the right time so that’s good for us. I thought I lost us the race there for a couple laps as I got us in dirty air and thought that I screwed myself. Luckily, I didn’t. We were able to get to him with one to go and make the pass. Huge accomplishment for me and this team. It’s good to come out here and cap it off with a win.”

With the points reset for the Round of 8, Nemechek is now seeded in the third position and 11 points above the cutoff line to advance to the Championship 4.

John Hunter Nemechek and the No. 4 Pye-Barker team will have a quick turnaround as they turn their focus to Bristol (Tenn.) Motor Speedway for the opening race in the Round of 8 on Thursday, September 15. Live coverage of the UNOH 200 presented by Ohio Logistics will be on Fs1, Motor Racing Network, and SiriusXM at 9pm ET.