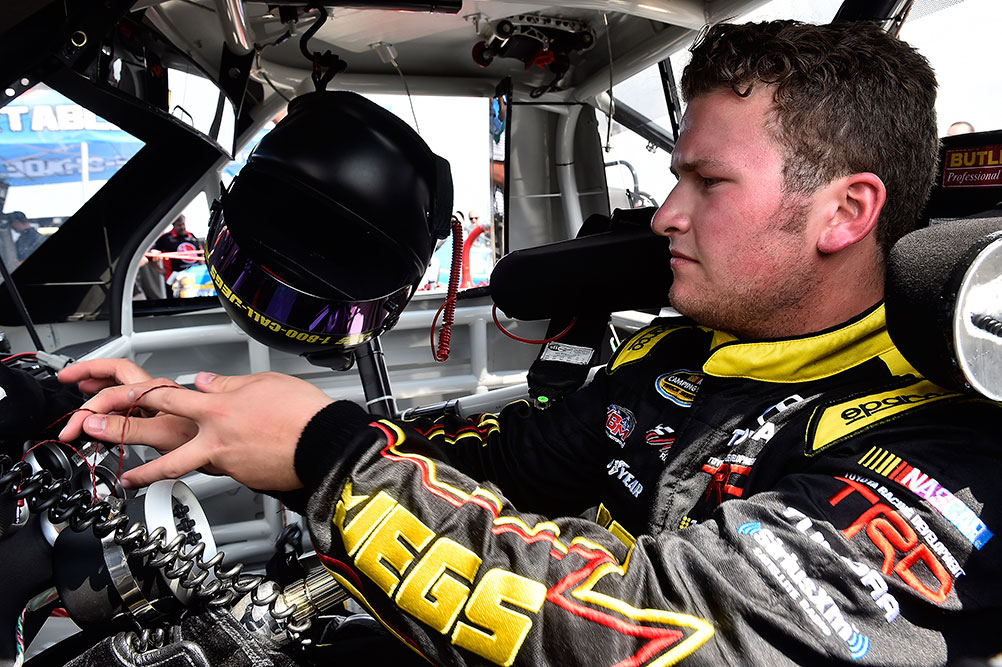 (DELAWARE, OH) – On Friday, February 19, Cody Coughlin will make history for his famed drag racing family. The 20 year-old will continue to climb the ladder of the circle track world and for the for the first time will take the green flag at the World Center of Racing in a NASCAR event.

Coughlin will pilot the No. 18 JEGS/SpillFix Kyle Busch Motorsports Toyota Tundra in the NextEra Energy Resources 250 at legendary Daytona Int’l Speedway, and the Ohio-native is having a tough time containing his enthusiasm.

“I am super excited about this,” said Coughlin. “Making a NASCAR Camping World Truck Series start at Daytona is a total dream come true for me.”

This isn’t the first start for the Delaware, Ohio driver on the high-banks of Daytona. Coughlin qualified second for the ARCA Racing Series Lucas Oil 200 at Daytona one year ago. He stayed up front all race long, led eight laps, and finished an impressive fourth.

ARCA cars are very different from the machines that compete in the NASCAR Camping World Truck Series. However, Coughlin isn’t letting that keep him from being as confident as can be heading into the 250-mile affair.

“I really think that we can run up front and contend for the win on Friday night, and there would be nothing cooler than scoring my first Truck win at Daytona,” Coughlin said. “Look at all of the names that have won at Daytona in any series. I’d love to add my name to that list; it would be an honor. I think that with the team that Kyle Busch Motorsports and JEGS and SpillFix have assembled for me, anything is possible.

“I’m just so glad to have been able to partner with Kyle Busch, his team and SpillFix and I’m extremely thankful for the opportunity to race for them. Hopefully I can get them a win right off the bat,” said Coughlin. “I’m also extremely thankful for all the support that my parents, Di and John, have given me throughout my entire life and I am happy to have my sister, Kennedi with me as well. The Lord has certainly blessed me with this opportunity and I plan to make the most of it.”

The NextEra Energy Resources 250 from the Daytona International Speedway will see the green flag fly at 7:30 p.m. ET on Friday, February 19 and can be seen live on FSI and heard on MRN radio affiliates.

The Start
Cody Coughlin has dreamed of racing in NASCAR at Daytona International Speedway (FL) for years. This week that dream becomes a reality. Coughlin is behind the wheel of a Toyota Tundra for Kyle Busch Motorsports.

Coughlin has competed at Daytona before with success. He qualified second, led eight laps and finished fourth in the 2015 ARCA Racing Series 200-lap event.

The Driver
Cody Coughlin is 20 years-old from Delaware, Ohio and will pilot a KBM Toyota Tundra for 11 events in the NASCAR Camping World Truck Series in 2016. He will also compete in several Super Late Model races across America with Team JEGS.

“I’m just so glad to have been able to partner with Kyle Busch, his team and SpillFix and I’m extremely thankful for the opportunity to race for them. Hopefully I can get them a win right off the bat.”

The Crew Chief
Wes Ward will be the man atop the pit box for Coughlin on Friday night at Daytona. Ward is an veteran crew chief across all three of NASCAR’s national divisions.

“I’m looking forward to going to Daytona with Cody. He had a couple of strong runs on the superspeedways in the ARCA Racing Series last season and that experience drafting should help him in his first Truck Series start at Daytona. I’m real proud of the effort from everyone at KBM and JEGS to chip in and make taking a fourth truck to Daytona possible. I’m really happy with how our Tundra turned out and I think we’ll have some good speed right of the trailer. We just need to stay out of trouble until late in the race and then make our move. Hopefully at the end of the night we can be in victory lane celebrating and make it a really special night for SpillFix in their first race as a sponsor on the truck.”

The Sponsor
SpillFix is an industrial organic absorbent that absorbs spills completely and immediately without damaging floors or equipment and without leaving behind harmful, carcinogens or dust. SpillFix was awarded “New Product of the Year” by the Occupational Health & Safety Magazine for 2015.

The Family
Cody is a third-generation race car driver. His family, including his father, John, has been successful in NHRA drag racing for decades. Cody, unlike his family predecessors, chose the path of circle-track racing rather than follow on the straight-line path set forth by the rest of his family. Cody’s mother, Di, and sister, Kennedi, attend Cody’s races in support of their favorite driver.

The Team
Kyle Busch Motorsports (KBM) has quickly established itself as one of the most successful teams in all of NASCAR. Owned by Sprint Cup Series champion Kyle Busch and fueled by his passion for winning, the organization has collected a Camping World Truck Series’ record four Owner’s Championships in just six seasons of competition and earned its first-ever Driver’s Championship with Erik Jones in 2015. The organization enters 2016 with a remarkable 45 Truck Series victories, including a single-season series’ record 14 wins in 2014. Sunoco Rookie of the Year candidates Christopher Bell and William Byron will each compete full-time in 2016 while Daniel Suarez and Cody Coughlin will share driving duties for the team’s third entry.

KBM prepares a fleet of race-winning Toyotas out of its state-of-the art 77,000-square-foot facility in Mooresville, N.C. Fans can stay up-to-date with all the latest KBM news online at www.KyleBuschMotorsports.com, by liking the team on Facebook (KBMteam) and by following the team on Twitter (@KBMteam), Instagram (KBMteam), and Google+ (+KBMteam).

The Race Truck
Cody Coughlin and the No. 18 JEGS/SpillFix Kyle Busch Motorsports team will pilot chassis No. KBM-22 at Daytona International Speedway in the NextEra Energy Resources 250. It is a new truck that has never been raced.

Cody Coughlin and Kyle Busch Motorsports have teamed up with SpillFix for the season-opening NextEra Energy Resources 250 NASCAR Camping World Truck Series event at the Daytona International Speedway. SpillFix will serve as the co-primary sponsor on the No. 18 Toyota Tundra along with JEGS.com for the Friday night, February 19 race at the big track.

“I’m really looking forward to starting a partnership with a company that is so passionate about what they do,” said Coughlin, who started on the front-row and finished in the top-five in the ARCA race last year at Daytona. “That passion really shows in the quality of their product. It’s an honor to represent them at our biggest race at Daytona.”

“I know it’s not Christmas, but it sure feels that way,” said Joe Davids, President, American Green Ventures (parent company for SpillFix). This inaugural race is just the beginning of a long and productive relationship with Cody Coughlin and Kyle Busch Motorsports. This is a big win for SpillFix. We’re excited about watching Cody Coughlin’s victories grow as the year progresses.”
SpillFix is an industrial organic absorbent that absorbs spills completely and immediately without damaging floors or equipment and without leaving behind harmful, carcinogens or dust. SpillFix was awarded “New Product of the Year” by the Occupational Health & Safety Magazine for 2015.

To learn more about SpillFix, a revolutionary new product in hazmat safety, visit www.spillfix.com, or Like SpillFix on Facebook.