Brandon Jones Equals Career-Best with Second-Place Finish at Chicagoland in No. 51 Chigo/Menards Tundra 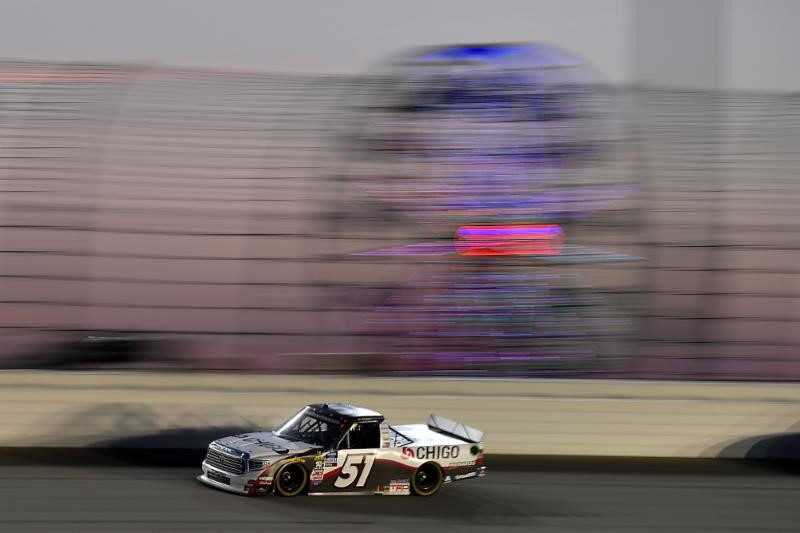 Brandon Jones made his third start in a Kyle Busch Motorsports Tundra of the season at Chicagoland Speedway and tied his own career-best series finish of second in the Camping World 225. On Thursday, Jones piloted the No. 51 Chigo/Menards Tundra to the first, 16th and 10th fastest laps in three practice sessions respectively. Friday afternoon in the hottest part of the day, Jones and the No. 51 team qualified 19th for the 150-lap event.

Jones may have started in the rear half of the field, but he showed early that he was a contender, confidently climbing through the field to win the first stage, then finishing second in Stage Two and the final stage. After green flag pit stops in the final stage, Jones was unable to close the distance to the leader and eventual race winner, Brett Moffitt, ultimately crossing the line nearly four seconds behind him to earn the second-place finishing position.

What was the difference tonight and what else did you need to win the race?

“It seemed like laps. It’s heartbreaking to hear those lap times come across the radio — that I was a half-tenth or a tenth faster, just too big of a gap there. I don’t know if we could have done something else with pit strategies or not, but that’s why we had good pit position there. We did learn a lot and that’s the most fun I’ve had in a truck race in a long time. Can’t thank everyone at Chigo for helping make this opportunity for me and everyone at KBM, Toyota, TRD and all those guys. It’s a blast. We have two more with these guys and we’ll try to make something happen.”

Todd Gilliland, driver of the No. 4 Toyota Tundra, finished sixth

Harrison Burton, driver of the No. 18 Toyota Tundra, finished fourth

The No. 51 team leaves the 12th race of the season ranked first in the Truck Series Owner’s Championship Standings, 17 markers ahead of second place.

Brandon Jones is scheduled to return to the No. 51 Soleus Tundra in two weeks at Kentucky Speedway, on Thursday, July 11. Live coverage of the Buckle Up In Your Truck 225 begins at 7:30 p.m. EST on FS1.